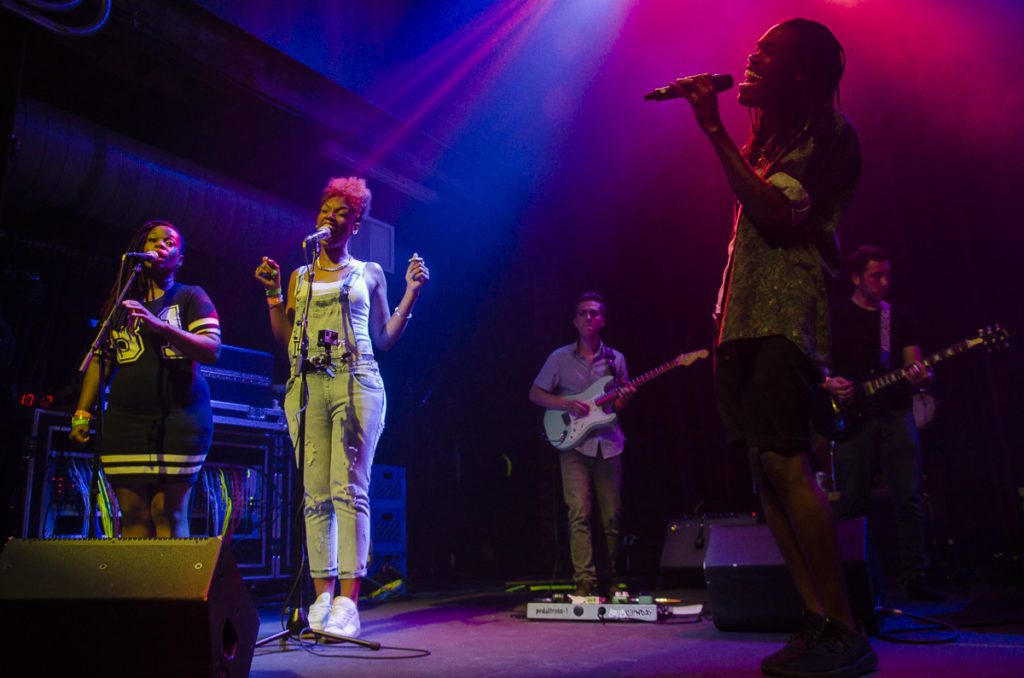 Syd: There is no denying what Dr. Dundiff is delivering. He had this smile on his face on during Friday night’s Dr. Dundiff & Friends show at the Mercury Ballroom from the minute he hit the stage until the last note came in. Given that the former Louisville music-scene staple now lives on the other side of the country, I cannot even begin to imagine the kind of logistical legwork had to have gone into setting up a night like last night. Imagine that first Christmas you had with your significant other, where everyone on both sides are furiously trying to negotiate their schedule just so you can eat turkey that’s probably a little too dry. Now imagine that you have over 20 significant others, and that you’re planning at least two holidays that occur simultaneously — the album and the release show — and that might give you an idea as to why he was smiling.

Then again, that may be a bit too dismissive. Dundiff is many things, but fly-by-night event coordinator is not on his resume. Multi-instrumentalist? Check. Emcee? You bet. Knows how to put together a solid party? Damn straight. It’s all about the moving parts, though, so you might as well add world-class marksman here, because the good doctor hit a moving target again with this impressive Louisville hip-hop collective, in a way that only built on the legacy of that magical Forecastle set last year.

Everything was in its right place last night, except for me at times. I missed the first part of the evening, which included a performance of Dundiff’s upcoming EDM album. I’ve heard it, and it’s good, so that made it that much tougher to miss out. You can see that very much as a DJ set, that kind of pre-show primer that kicks things off. Otis Junior followed that up. Catching a few of his songs was a treat. Otis is a star if there ever was one, and he had this quiet intensity on stage that set the table for the Dundiff’s all-star jam to come. Otis Junior’s set was the perfect transition to Dundiff’s; it engendered an intimate environment, while creating a chill calm before the storm.There was almost no break in-between sets. Eureka! Dundiff is an artist of my own heart. Let’s not shuffle our feet and lose all the momentum. Let’s go.

Go they did, with a set that unfortunately skipped the remarkable “No Comment,” the Dundiff-produced Shadowpact track from Dr. Dundiff & Friends debut album, which is currently available in local record stores. In fact, there were a few notable absences: the aforementioned Shadowpact, Chuck MF Deuce (although Skyscraper still represented with style), 1200 and Jim James. That only serves to illustrate though that despite a few missed friends, the scene here in Louisville is still vibrant and full of life. There was so much talent on stage from Rmllw2llz to Jack Harlow and on, this time featuring a few new faces like Dave. and Dom B. The band was on fire and the energy was high throughout the night. This wasn’t just a revisit of last year, but a party that everyone was and is always invited too that celebrates Louisville hip-hop in all its glory. Long may it reign.

Scott: I was kind of boxed out of the Dr. Dundiff & Friends set at Forecastle last year. After bouncing around different sets leading up to it, I arrived late, and there was already a packed-in crowd. And because they played on the stage under the highway, and I was 50 feet or so behind the soundboard, I didn’t get a good vantage point for the set. Although I had it on good authority — and by good authority I mean everyone who I talked about it with afterward — that it was one of the best sets of Forecastle. That stage isn’t set up to carry sound far distances, so it was almost like I was only sort of there. It was like watching a band at a small bar through the front glass window — from where I was the sound was muffled, and I couldn’t really see what was going on. That doesn’t mean I had an off-putting experience, or had any negative feelings toward their set. I just basically missed the festival’s most-talked-about set while being there.

So, when it was announced that it was happening again, I knew I had to go. And everything that I was told about it rang true. The energy was electric throughout both sets, and, as Syd mentions above, the momentum never stopped. At standing-room-only concerts, I usually struggle to stay in one place, but I stood in the same spot for almost the entire show, absorbing the songs and waiting for what was coming next. The raw power and presence of the various rappers and the band (horns, guitars, keys, drums and saxophone from The Smoke Shop Kids and members of other local bands) mixed with so many different voices and collaborations made for a quick hitting, in-and-out influx of styles and ideas. There were plenty of great individual performances, but the night seemed to be a master’s class of strength in numbers, both a testament to how strong the local hip-hop scene is right now, and how, on Friday night, a pretty massive selection of its core blended together so seamlessly. From Touch AC’s charisma to Ottis Junior’s incredibly soulful delivery to Kogan Dumb’s striking flow to Dundiff’s ability to hold it all together and everything in-between, this show was something special. And something I hope happens again.