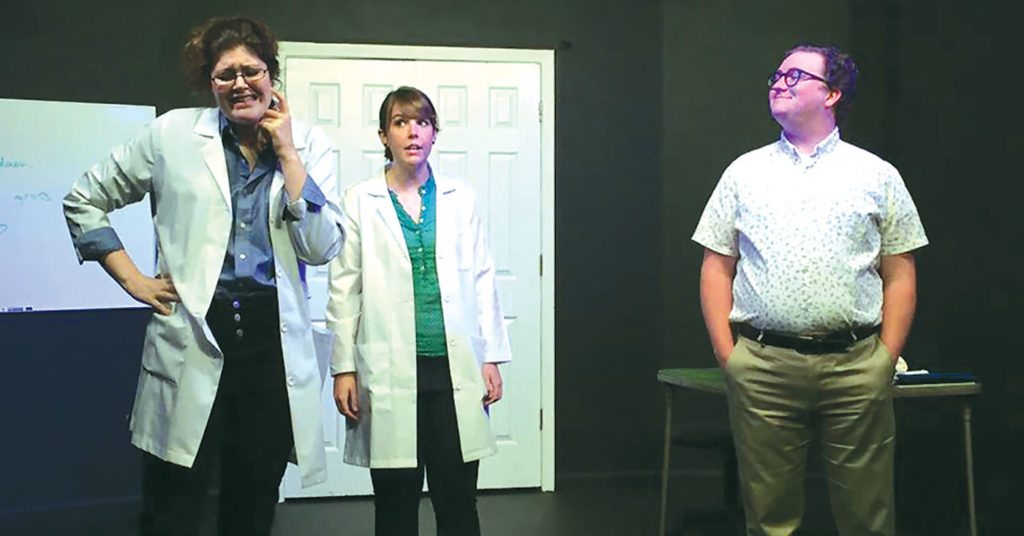 In a world where trends are born and flourish and are lost to memory within a few spins of a Facebook algorithm, it’s difficult to recognize a cultural watershed moment in real time. But it seems to me that the 1st Annual Derby City Playwrights New Play Festival is just that.

To be clear: The Metro Louisville theater scene has long been able to boast a collection of vibrant, stable, well-supported companies with high artistic standards and good audience support. And every season finds productions of good (and, sometimes, important) plays by local and regional writers.

But the New Play Festival is unprecedented in its ambition. The lineup consists of six full-length productions by Louisville playwrights. And the three plays I saw this weekend (I’ll cover the others next week), are outstanding. These aren’t gestating workshop productions. They were developed over time, through the kind of collaborative dramaturgical process that’s a hallmark of the best centers for new play development. The result is a set of fully-formed plays with compelling premises, fascinating characters, robust plots and tight dialogue. The scripts are brought to life by terrific acting and directing.

And if you have any interest whatsoever in theater and the performing arts, you should make an effort to catch as many of these plays as you can.

In “Schrodinger’s Girl,” by David Clark and directed by Patrick Bias, we enter the weird world of medical researcher Genny (Sabrina Spalding), and her assistant, Monica (Megan Logue), whose work on infant brain cancer is about to collapse because the research materials she needs — infant skulls — are impossible to acquire. Impossible, that is, until boxes start arriving in the mail — accompanied by creepily-romantic missives. Suddenly, the research question shifts: Who is sending the skulls? That question, it turns out, is complicated by Genny’s sexual peccadilloes. There are at least three men smitten enough with Genny to ply her with skulls, and as Genny and Monica go forensic and start sifting through a cascade of unreliable stories about Genny’s liaisons, we’re introduced to these fellows (Chase Gregory, Tony Smith and Jacob Cooper) in a cascade of rowdy, ribald, perfectly played vignettes. So startling was Tony Smith’s first entrance that if I’d been holding a drink (which one can at The Bard’s Town), I’d have sprayed it all over the theater. Apart from individual performances, though, Bias has this cast working together like a finely-honed chamber music quintet: It’s so hard to see all the little details, that you may want to see this play twice.

“Exposure,” by Taj Whitesell, and directed by Jane P. Jones, starts out as clever comedy about a ghost, (Carol Dines), who can be seen only by Phoebe (Jane Mattingly), a smart, lonely teenager with growing pains and a new boyfriend, (Danny). The ghost is trapped in this world by unknown unfinished business. And all the people around Phoebe — her authoritarian father, (Frank Morris), frustrated mother, (Tamara Dearing), and self-important grandfather, (Andy Epstein) — are caught up in a web of corrosive secrets. Everyone (including the ghost) is hiding something in the dark, and when a new person, (Frank Whitaker), shows up at the end of the first act, corruption lurks. But then a flash of insight opens the door to a poignant moment of redemption and reconciliation. There are fine performances across the board, but Mattingly and Dines bring a special intergenerational chemistry to the action.

Brian Walker’s “High Tide,” directed by Natalie Fields, takes us along on a road trip with a trio of woefully-dysfunctional siblings. Their recently deceased mother, (Wendy Hames), was a passionate advocate and spokesperson for octopus rights (we see her multiple times in full-on lecture mode, and though those lectures yield plenty of laughs, they’re fact-based and well-argued). Prior to her death, she kidnapped an octopus, and now her adult — well, nominally adult — children, (Michael Roberts, Kelly Kapp and Briana Clemerson), are charged with transporting the creature to the waters where it was captured. It’s a tough trip filled with bitter revelations that are leavened by three roaring performances (plus the quiet, witness of Mom’s lurking ghost), as the characters travel through pain and laughter, engage in some amazing wolf calls, and make their way to a destination that’s more than a dot on the map.

The Derby City Playwrights New Play Festival runs through July 24 at The Bard’s Town Theatre, 1801 Bardstown Road. Six plays are in repertoire throughout (one performance of each play each weekend). For ticket information: thebardstowntheatre.org (shows are selling out, so make a reservation, and if you have a season pass, you need to make reservations for specific performances). For information about the company: derbycityplaywrights.org.

‘Romeo and Juliet,’ a special urgency

The Kentucky Shakespeare summer festival continues through Aug. 14, with all three of the company’s three featured productions (“Two Gentlemen of Verona,” “The Winter’s Tale,” and “Romeo and Juliet”) running at the C. Douglas Ramey Amphitheater through July 24 (with other partner productions in the weeks following).

LEO previously reviewed the first two productions, but “Romeo and Juliet,” directed by Matt Wallace deserves attention as well. It ends as it always does, with the corpses of young people sprawled dead in a crypt, while old men shake hands and promise to end their strife.

These days, it strikes me as an ending more fraught with irony than with hope. But Wallace’s cast, with Crystian Wiltshire and Megan Massie in the title roles; Gregory Maupin and Marci Duncan in the morally crucial roles of Friar Lawrence and Juliet’s Nurse (and an entire cast aided by Donna Lawrence-Downs’ cunning costume work) brings a special urgency to this story of juices running free and reasoning gone wrong. •