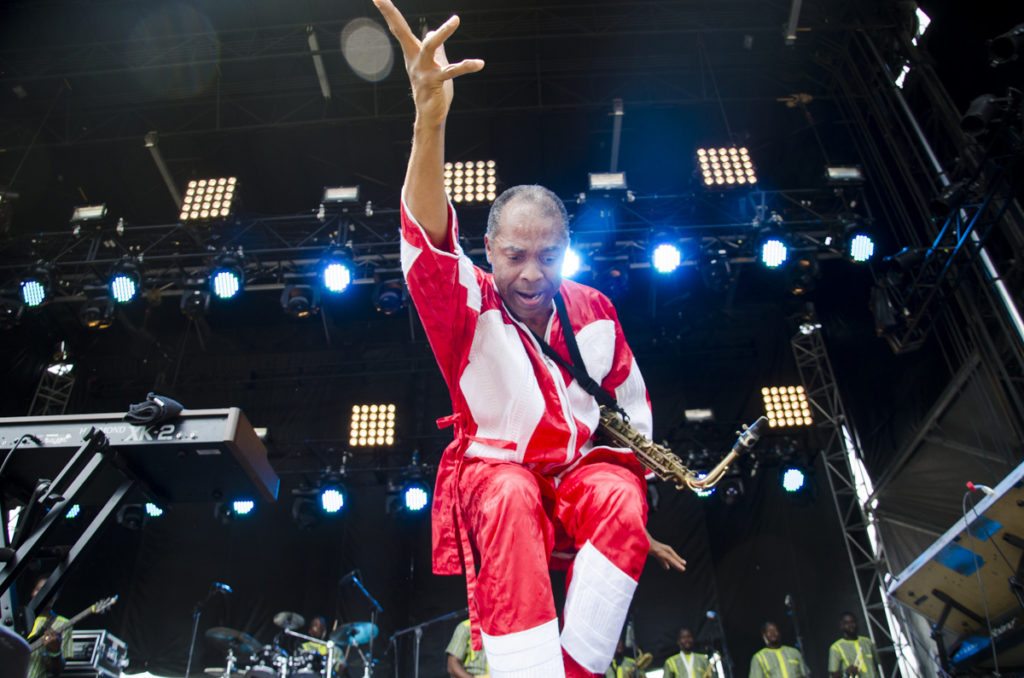 The ugly: My hangover

Pokemons caught: Like five rats, a Tangela with 210 CP

As Sir Rob Thomas once sagely, pithily professed in “Smooth” by Santana, featuring Rob Thomas of Matchbox 20, “Man, it’s a hot one.” Because Forecastle is a thing we do in July when the weather is hot and turbulent, as opposed to in September, so it should come as no surprise. I really only mention it because it’s the best lede my sun-saturated brain could think of. Whatever. But like in years past, Mother Nature decides that Sunday will serve as the hottest day of the festival for whatever reason, or simply it is that day that the struggle becomes the realest. My ears still rang from Nothing’s sonically-tremendous set the night before, which felt like standing in a nuclear reactor and caused my testicles to fully retract. I also battled a nasty hangover, because, you know, your 30s — so kicking off the day with Femi Kuti and the Positive Force, the heir of Afrobeat, provided some much needed manna. Kuti’s set came replete with a veritable orchestra, with the belly dancers, to boot, resplendent costumes and lengthy Afrobeat anthems that weaved through different movements. We like to talk about those “special Forecastle moments,” and this was one of them. Swift and efficient roundhouse kicks reserved for anyone at the festival who missed this (but springs a chub whenever Vampire Weekend comes on WFPK).

Now, it was time to go engage with some brand activations — marketing jargon for stuff like, ya know, the big cigarette tents, or the giant Coca-Cola headphones adjacent to a booth for sampling America’s favorite carbonated corn syrup, in the event you haven’t had it before. I’m not being ironic when I say I love these things, and, this weekend, I’m extremely pleased to say I got jacked in to the virtual world, thanks to Chaco. The sandal company offered up not only a retail component, in the event you needed to Mr. Rogers it at the festival with a last minute $100 shoe change, but also a booth with multiple Oculus Rift virtual reality headsets. Once I uploaded my consciousness into the mainframe, I encountered The Lawnmower Man who was … nah, I’m just playin’, there were four adventure modes, and I chose Hawaiian cove for a 360 degree immersion on top of oceanic cliffs and waterfalls and friends I haven’t made yet, having a big time. I have seen the future, and everyone likes bulky sandals.

Unknown Mortal Orchestra summoned, at least from what I could tell, the second-largest audience for the under-the-overpass Ocean Stage, behind Saturday’s radioactive Danny Brown set. Man, they were awesome, ripping through a cross-catalog set of beachy, balmy, funky, rhythmic, light psychedelia, with a new lineup (including Rubin Nielson’s new drummer from Lexington). A really fantastic set, followed quickly by Steve Gunn’s breezy, primitive American heady folk. Unfortunately, this seemed to be the lowest-attended set of the weekend. Just me, a giant Hunter S. Thompson puppet gettin’ down and maybe a couple dozen others. Too bad. Perhaps it would’ve helped if everyone knew this guy helped upstart Kurt Vile and the Violators?

I had to swing by Death Cab For Cutie’s sunset engagement at the Mast Stage, so I could remember being 16 and feeling misunderstood and sad about a girl rejecting me. Man, did I have some feelings whilst headphoning with The Photo Album back in 2001 (and they played “Why You’d Want To Live Here”). Forecastle almost felt a little too massive for Death Cab’s introspective brand of scarf rock, but Ben Gibbard’s soothing vocals create for a nice wind-down, while you stuff your face with gator tail from Phat Daddies during the golden hour.

Speaking of my face, Speedy Ortiz melted if off again during their make-up date from last year, closing out the Port Stage, and their live show is much more muscular than anything on record. Sadie Dupris struck up some affable stage banter, with a shirt reading “Gender is Over (If You Want It)” draped over her amp, before sending out sonic EMPs over the crowd and disabling any drones around Waterfront Park. Like last year, WFPK had the best stage over the weekend, featuring a lineup that, curiously, rocks harder than most of their daily programming.

A really phenomenal day of music, Forecastle Fest 2016 closed out with a whimper. I tried to make it through Ryan Adams — I really did — but I had to bounce. It was the end of a long hot weekend, and that guy’s kind of a snooze (granted I’m generally indifferent to alt country and most of the in-store playlist at Chipotle).

Lara: Femi Kuti has a problem with the hot-ass Kentucky sun, too, but that didn’t stop him from moving right through an hour-long set yesterday on the final day of Forecastle. I cannot deny this was my favorite set of the day — of course, I was already weighted with excitement and the expectations of being a rabid follower of the Afrobeat. The energetic 54-year-old bandleader just exudes cool, whether he’s hunched over a mic, drawing out the words “big business,” spinning himself into a coma or laying down a long-winded note on his saxophone. Femi seems to enjoy pushing himself onstage while retaining control of the 15 other people with him. He commended us for withstanding the heat, but I’d like to pass that respect along to the lone male dancer on stage left, grooving in a full suit.

I hope the dudes of Unknown Mortal Orchestra were able to watch that before playing their own set at the Ocean Stage later — it seemed like something they’d enjoy. Ruben Nielson is another frontman that exudes cool, but in a humble, confident-in-his art sort of way that may not always follow him off stage. But with a guitar in hand, Nielson understands that leaving the stage is how he bonds with his audience, by way of crowd surfing and playing guitar all up in their faces.“FFast FFriends” featured an especially Prince-like guitar solo (although not far off from the album version).

It’s exciting to see a band like UMO perform to a festival audience, because nothing about it feels out of place. They’ve risen on a successful come-up since the release of their third studio album (this year’s retro-slick Multi-Love) and the infectious, groove-driven hits “Can’t Keep Checking My Phone” and “Ur Life One Night.” Summer festivals are exactly where UMO should be playing at this point in their career, and I can’t wait to see what they’ll bring on from here.

Washed Out was the passive draw of the day. I was really into it first, but that energy mostly derived from opening on the popular songs “Eyes Be Closed” and “New Theory.” I stuck it out hoping things would pick up, and because I was really feeling the Phil Collins drum fills, until they started materializing in every song. Turning to my roommate, who also stuck it out, we agreed it was all pretty mild.

Scott: Sunday was a day that exceeded my expectations. From when I walked into Femi Kuti, until hearing Ryan Adams play a three-minute improv song making fun of some guy who yelled the tired cliche “play ‘Summer of ’69,’” the last day of Forecastle carried itself well, throughout the day.

Femi Kuti, the heir of Afrobeat, was an instant shot of adrenaline — which was much needed, at the end of a weekend of getting beat up by the sun.

Speedy Ortiz sounds a lot more evil in person, and it definitely enhances — or at least differentiates — the bands already really-interesting approach, which relies on guitar-heavy, angular blasts that are captivating live.

Ryan Adams played a rock-‘n’-roll show, which was probably expected after his latest record. It was a lot different from when I saw him at the Ashes & Fire tour, and it was good. Songs were sped up, pinball machines were on stage, he got in arguments with the crowd and he played the greaser-punk Heartbreaker b-side “Shake on 9th Street,” and we heard just enough early, slow stuff to keep an even-paced concert that didn’t get too low.

Anna: I wanted to see Brandi Carlile, but my friends were interested in checking out Washed Out. We considered separating, but, since every time we do that, we can never manage to meet back up, we decided to catch the first half of Washed Out and then swing by Brandi’s set for the last bit. Washed Out was a lot of fun, it turns out. But my friends stayed true to their promise and, halfway through, we headed over to Brandi’s set. As we got closer, I could hear the first couple notes of her song, “The Story,” which is one of my favorites. I picked up the pace, and we managed to get over just in time. I’ve seen Brandi live before, and she always puts on a great show — definitely my favorite of the night, even though I only saw half. When she wrapped up, we grabbed a spot in the back for Ryan Adams, and feasted on some of the biggest burritos I’ve ever seen. All in all, Forecastle 2016 was one for the books. I somehow managed to not get sunburned, and, even though I’m exhausted and my legs hurt, I wish I were getting ready right now to head down for another day of music with my fellow Louisvillians. But we will have to wait another year until we can all pretend we’re hippies and party together again.