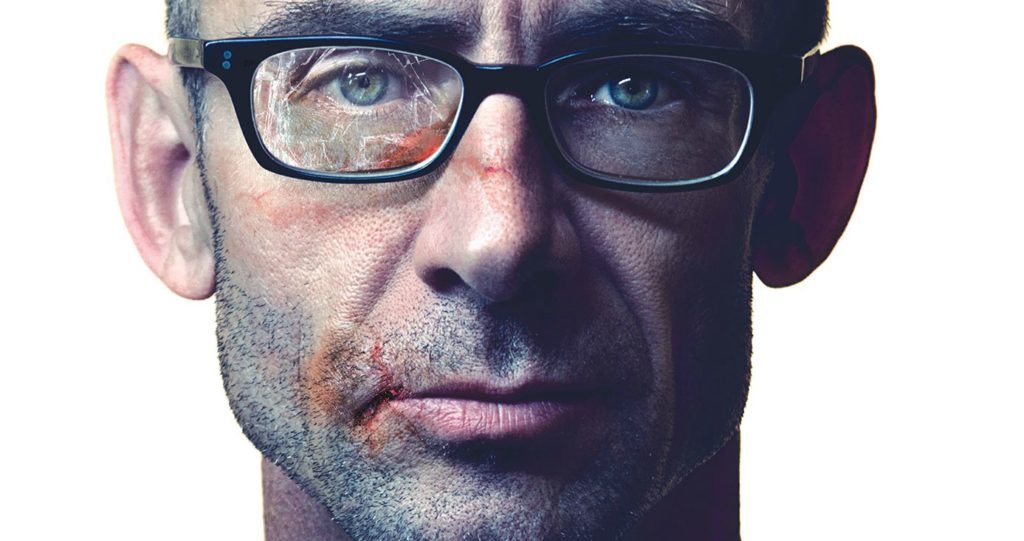 Not long into Chuck Palahniuk’s newest work, two men are arguing over what to expect if each other were the primary mentor for a young boy.

“He’ll piss in soup and make soap from human fat, and become King of the World?”

“What can you offer him? Some tragic Liberal Arts degree? A mind-numbing corporate job?”

Just in case you’re harboring doubts, not many pages will be devoted to acquiring that Liberal Arts degree. The molding of generations of men, following advice that twists the jagged edges off social philosophies like that of Joseph Campbell, is key to the long-anticipated sequel to “Fight Club.”

But there’s one twist that just might cap all the others: “Fight Club 2” is a graphic novel.

That’s right: As far as unbelievers, or the uninitiated might say it, this significant piece of popular literature has been done up as a glorified comic book. It’s as postmodern as you might expect: large-font screams and splotchy-blood spatters land on subsequent pages as if timed to replicate a mash-up between the readers’ turning-the-page experience and the characters’ suffering of traumas. Medicinal capsules, at times, blot out some readability, mirroring the pharmacologically-induced haze that characters live with — or try to get beyond, so that they can truly live.

On these illustrated pages, the young and old are injured and killed with mocking impunity and confrontational black humor. Men of prime age? They’re often doing the worst things imaginable to themselves and each other — sometimes egged on by their convictions of what women want. The goader-in-chief, though, is none other than Tyler Durden — arguably Palahniuk’s greatest creation, and memorably played by Brad Pitt in the film version of “Fight Club.”

The author is coming to Carmichael’s for a signing — a ticketed event that’s expected to draw a long line. (The bookstore says its ready; check its website for the rules for this event.)

When LEO recently spoke with Palahniuk, our first questions naturally focused on how the new work landed in this new medium. It turns out that at a dinner party, he was cornered by Matt Fraction, Kelly Sue DeConnick and Brian Michael Bendis — well-established stars of the comics world. As Palahniuk said, “They hammered on me, and told me they’d teach me how to write comic script.”

LEO: How long does that take to learn?

Chuck Palahniuk: I got my first draft within a few weeks — then I’ve spent two years rewriting. So the final script is a good solid two years’ work.

LEO: Is there something in comic script that you find it easier to work with?

CP: The largest convenience is that the transitions in comics are handled so mechanically, and so effectively, with the panels. It’s just moving from one panel to the next, to the next, to the next. Writing long-form prose, you need these very wordy transitions, typically, to move from one scene to another, or from one temporality to another. They become very writerly in books, and I hate those. I want a story to be cut like film, where you can just jump. Typically when I write novels, I’m looking for a chorus as some sort of device that I can use as a transitional jump. That’s why you have the rules in ‘Fight Club’ — I could just insert a rule, or a chorus, and signal the reader that I was jumping to something different.

LEO: Are sharp transitions a part of your personality? Or only your writing?

CP: It’s really in my writing — and it’s because I decided that if I was going to spend time writing, then the writing itself had to be as interesting to me as anything else I might do in that time. The writing had to entertain me first, because there was no guarantee that it would ever pay. Doing something edgy — that shocked or titillated me, that provoked me or that frightened me — that was always part of the incentive.

LEO: Do you still frighten yourself with your writing?

CP: If I’m doing it right. I studied with Tom Spanbauer, who teaches ‘Dangerous Writing.’ Tom’s idea is that writing should be a form of therapy, and you should be dealing with the most dangerous, unresolved aspects of yourself.

LEO: What would Tyler Durden think of the 2016 presidential campaign?

CP: You know, Tyler would love the conflict of it. Tyler would adore the fight between people — and wouldn’t want to see it resolved. Tyler would probably want the two greatest outsiders, which should be Bernie Sanders and Donald Trump … He’d want that selection to go on forever and ever.