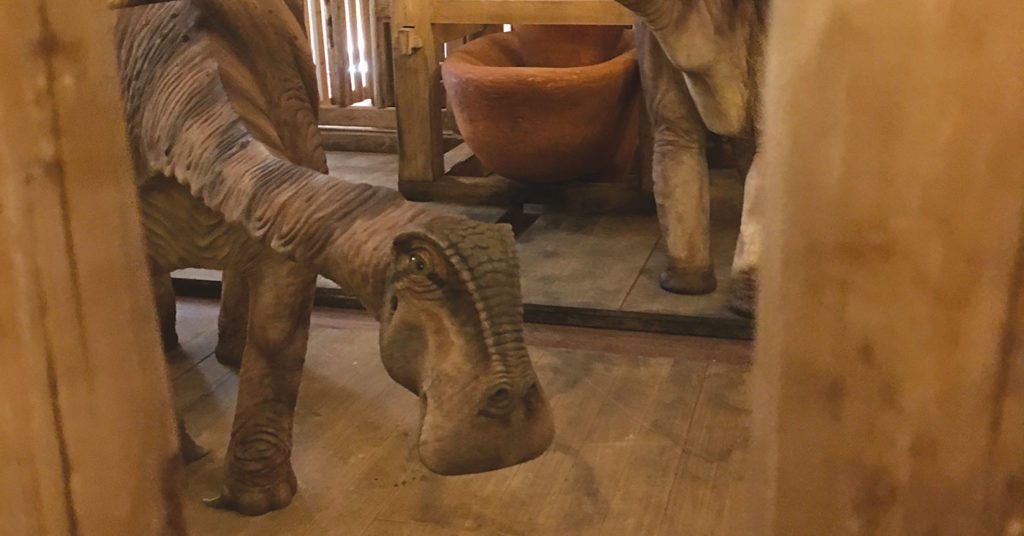 Dinosaur Replica on the ArkPhoto by Pam Platt

Until last week, the strangest theme park attraction I ever visited was the Maelstrom ride in the Norway exhibit at Epcot in Walt Disney World. It featured the disembodied voice and eyes of Odin and ticked-off trolls toying with tourist-laden, flume-ride boats, which ended their adventure — of course, where else — next to an oil rig in the North Sea. Not quite sure what the Norwegians were selling, but we rode it several times just to make sure we weren’t hallucinating. It’s one of my fondest Disney memories: A dark, cool refuge, no lines and zero risk of arrest, with the bonus mind-bending.

Well, Maelstrom’s gone, retired several years ago for a new “Frozen” attraction. But if it’s mind-bending you want, you can feed your head closer to home with the new Ark Encounter, which opened last week.

Built near Williamstown, Kentucky, the $100 million theme park (zipline to come) depicts the Answers in Genesis-approved, frozen-in-fundamentalism story of Noah and the great flood. Its young-Earth-creationist cousin, the Creation Museum, is a little farther north.

I went to the ark on opening day — there’s an ice-breaker for you — to see it for myself. That’s why I can say, with certainty, it’s not a big leap from that Maelstrom to this flood.

No trolls and Odin here (the ark is strictly non-pagan) but the first set of animals I saw in a cage on AiG’s ark were pterodactyls — despite science teaching that dinosaurs and humans lived tens of millions of years apart. But when you believe the Earth is only 6,000 years old, as AiG insists until the cows and centrosauruses come home, some mash-ups are required; hence, dinos with Noah and the fam in Williamstown.

Now, that ought to put Kentucky on the map.

The ark is “the largest timber-frame structure in the world” but it is so refined that you don’t have to worry about picking up even a splinter. And though it is big enough to house several space shuttle orbiters, there is no room for any doubt, either. The owners don’t call themselves Answers in Genesis for nothing.

If Noah protected the buoyancy of his ark by coating it with waterproofing pitch, the Ark Encounter is slathered with answers.

Even to questions you didn’t know you had (how would polar bears be kept cold on the Ark?).

And if you don’t understand the answer to, say, what is a cubit? No problem. You can show one to your friends, because a cubit goes for $19.99 a pop in the gift shop — where, by the way, you don’t have to be AiG president, chief executive officer and founder Ken Ham for your books to be displayed for purchase, but it seems to help.

A closer look at even the bag your lunch came in — giving new meaning to reading the fine print — provides a deeper understanding of AiG’s exhaustive explanations. AiG offers that it takes “artistic license” with some characters when the Bible falls short, and helps out with its own “backstory” to other narratives. Which would be kind of amusing, if you didn’t Google some of this stuff and see how often the people taking “license” and providing “backstory” pop up alongside scientific sources.

The “encounter” also presents what I consider an idealized version of the Ark’s inhabitants and their life on board.

As it is at the Creation Museum with Adam and Eve, the Ark’s Noah and his family are buff, beautiful and catwalk-ready.

As for the ark, my companion called it “the calm amid the drowning genocide” (exterior sound effects not provided; thoughtfully, neither were interior olfactory prompts, which would have been staggering). I called it Ark Chic: Interiors by Pier 1 and Pottery Barn. AiG material described the human living quarters as “magnificent,” so I referred to the location as the Lido deck.

Here’s the rub on the Noah story, the one to which my companion alluded:

All but Noah and his Seven Arkettes (wife, three sons and their wives) were flotsam and jetsam. Were all the rest, locked outside, banging to get in.

I don’t understand the appeal of this story.

I really don’t understand the up-to-$18 million in tax incentives for a place that propagates a particular strain of anti-science religion. Heck, with a projected attendance of 1.4 million people a year, AiG could cover that in a year and change if they made buying a gift-shop cubit mandatory for each visitor.

In the days since my visit, I have come to think of this place this way:

The Ark Encounter is to the Bible as “Lost in Space” was to space exploration: A glossy, occasionally entertaining, survivalist fairy tale with some eye candy, but nothing like the real thing.

Faith is so much bigger, so much greater, than that slick Ark plunked in a field near Williamstown, Kentucky. And it’s more about questions than “answers.”

P.S. and FYI: Don’t go with a Hillary bumper sticker on your car. Mine was gone when I returned home. •

If must you go…