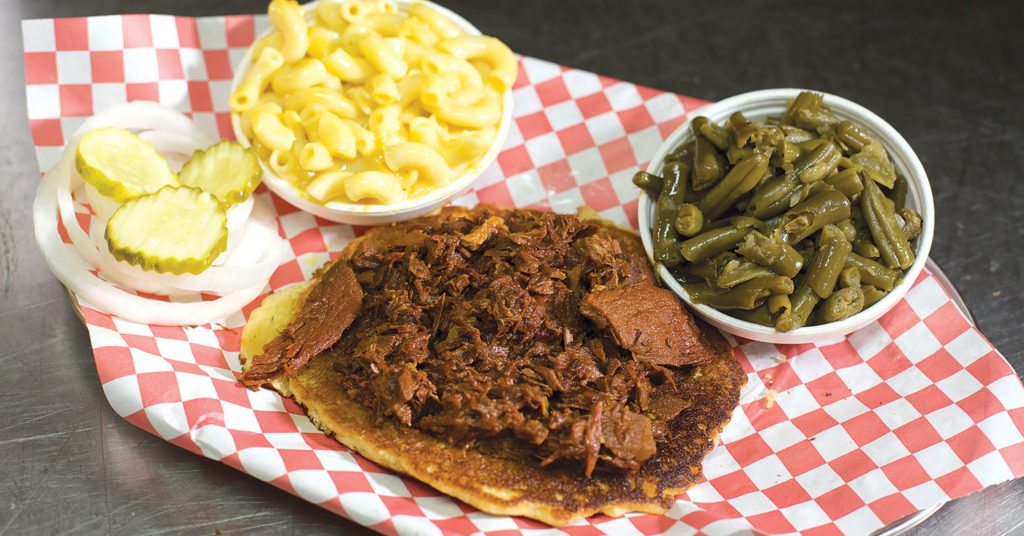 There are few sights and scents that warm a dedicated carnivore’s heart like those of a giant pile of wood nestled next to cinder-block building from which the savory scents of wood smoke and cooking meat emanate. Summer is here, and that means picnic and dining tables piled with racks of ribs, plates of pulled chicken and pork, bowls of potato salad and slaw and all the fixings that accompany that favorite American summer feast — barbecue.

In a very generic sense, people refer to any sort of grilling out, especially if it involves lots of fire and smoke, as barbecue. But barbecue proper involves cooking meat very, very, very slowly (as in hours) over hot wood coals (very often, hickory wood), with plenty of smoke imbuing the finished product. The key to flavor is that fat from the cooking meat drips onto the coals and wafts back up, imparting even more flavor. The best barbecue will have that magically delicious crust known as bark, and, underneath that bark, it should be tender and juicy.

The true Barbecue Belt is mostly wrapped around the South. Styles, which largely (but not exclusively) depend upon rubs and sauces, differ from North Carolina, to Memphis, to St. Louis and Texas. Kentucky has its unique claim to barbecue fame, one with a deep history. That claim, in one word — mutton.

Those of us who live in Louisville and the Bluegrass region may be largely unaware of this, since the mutton region is firmly anchored in Western Kentucky. Residents of the home of the International Bluegrass Music Museum — Owensboro — also host an annual International Bar-B-Q Festival each May, during which more than 20,000 pounds of mutton are slow-cooked, sauced and served.

Why mutton, and why here?

The answer is that many of the settlers to the area in the early 1800s were of Welsh decent, and, therefore, sheep farmers. In 1816, the U.S. government enacted the Wool Tariff, which made hitherto cheap, imported cotton and wool expensive, and it made American farmers’ wool profitable. This was, by the way, the first tariff designed to protect a U.S. industry, and it gave sheep and lamb farmers a leg up, so to speak.

Mutton was also served at large, festive gatherings. Apparently, it was the centerpiece of the dinner for Thomas Lincoln and Nancy Hanks’ wedding. A guest noted, “We had … a sheep barbecued whole over coals of wood burned in a pit, and covered with green boughs to keep the juices in,” thus providing an excellent recipe for how to barbecue mutton, as well as an interesting historical note about the culinary inclinations of the parents of the future president of the United States.

But you don’t have to dig a pit and barbecue your own sheep, or even travel to Owensboro, to enjoy the savory, gamy delights of barbecued mutton in Louisville. You only have to go as far as the Ole Hickory Pit Bar-B-Que, very appropriately located on Shepherdsville Road.

Pitmaster Daniel Sherrill tends classic masonry pits — firebrick with iron lids —  where, in addition to chicken, pork ribs and Boston butt, he slowly cooks and smokes rear legs of lamb “12 to 14, or even 16 hours” over the wood coals to get the degree of tenderness desired in the meat.

“We then shave the meat off the bone, chop and combine it with a tomato and vinegar sauce, since that helps cut the fattiness of the meat,” explained Sherrill.

The result is delicious.

The restaurant serves the mutton as a sandwich (on a bun or Texas toast), but there’s another Ole Hickory House specialty that suits the tangy meat, too. Ask to have your chopped mutton served on one of the pancake-sized corn cakes. It’s an open-faced sandwich, where the sweetness of the corn complements the meat.

When I ordered mine to go, owner Kenny Ramage — whose Western Kentucky roots account for the fact that mutton is on the menu here, and whose father built the barbecue pits — wrapped the meat and corn cake separately, so the latter would stay firm.

If you want to throw a mutton picnic (or serve it at your wedding, as did the Lincolns), Ole Hickory sells it by the pound, too.

A perfect beverage pairing to complete your traditionally Kentucky feast is Louisville’s Falls City English-style Pale Ale, readily available in growlers and bottles. It is mildly hoppy, with a bright clean finish and makes a great mutton partner.