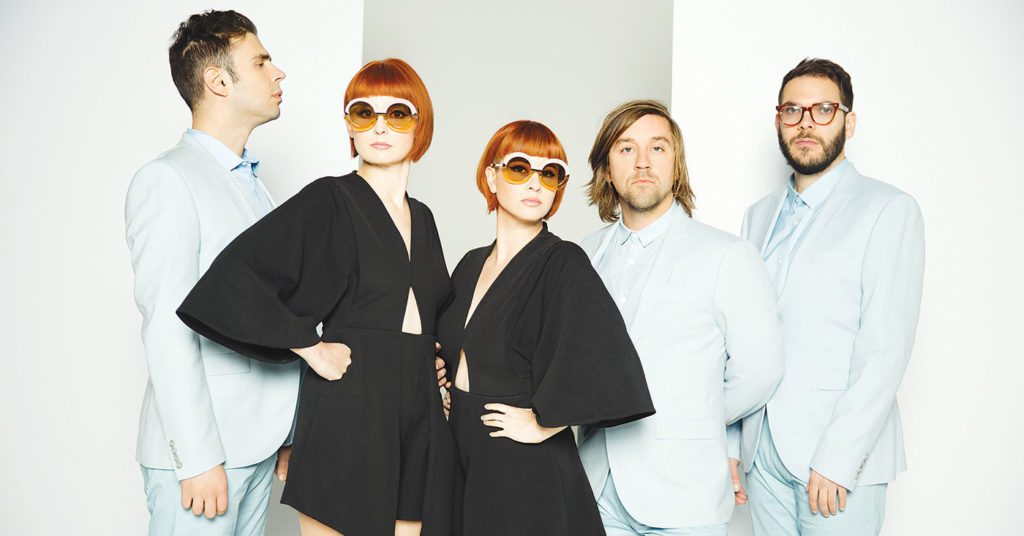 Imagine The Human League, except the songs aren’t slaves to the beat (though many can get you dancing). Keyboards and percussion are in genuine orchestrations — not just washes and layers, they pump up or counter the melodies. The lyrics balance heart and mind, thoughtful and intimate (and sometimes raucous). So, that’s a start to appreciating Lucius — but only a scratching-the-surface start.

Jess Wolfe, one of the two singers (and songwriters) spoke with LEO in advance of Lucius’  Waterfront Wednesday appearance July 27. First topic had to be the bicoastal quintet’s relationship with the road: a grueling tour schedule after debut full-length Wildewoman is said to have darkened the sessions that led to this year’s Good Grief. So what lessons learned have been incorporated into the new tour? “We’re on a bus … we’re not driving ourselves after a show, and that automatically gives you a better space to be able to do your job well and feel good doing it.” She doesn’t see only regrets in that rear-view mirror: “It taught us a lot about limits and independence and family, and the important things in life. How to give ourselves each of those things, while honoring each other and honoring our craft.”

Popcraft that’s often indicated by sublime control of pristine sound, as in the a capella opening of “Madness.” But is it a challenge to pull off these songs in venues that, say, put the Ohio River right at her back?  “A lot of the songs on the new record are really challenging — especially vocally. We really pushed the limits this time around. I was worried that we wouldn’t be able to stay on tour and keep our voices, but it’s gone remarkably well.”

“Songs that especially challenge us? I guess it’s the emotional ones. ‘What We Have (To Change)’ — to sing that song is pretty intense.” But it’s just the opposite when they start up a cover like Elvis’ “Can’t Help Falling in Love”—then, Wolfe says, she and singing/songwriting partner Holly Laessig can have fun when they “get outside of our own heads for a moment.”

Lucius plays the Big Four Lawn as part of Waterfront Wednesday on July 27. With Brett Dennen and Kaleo. Doors at 5 p.m. at Waterfront Park. Free.