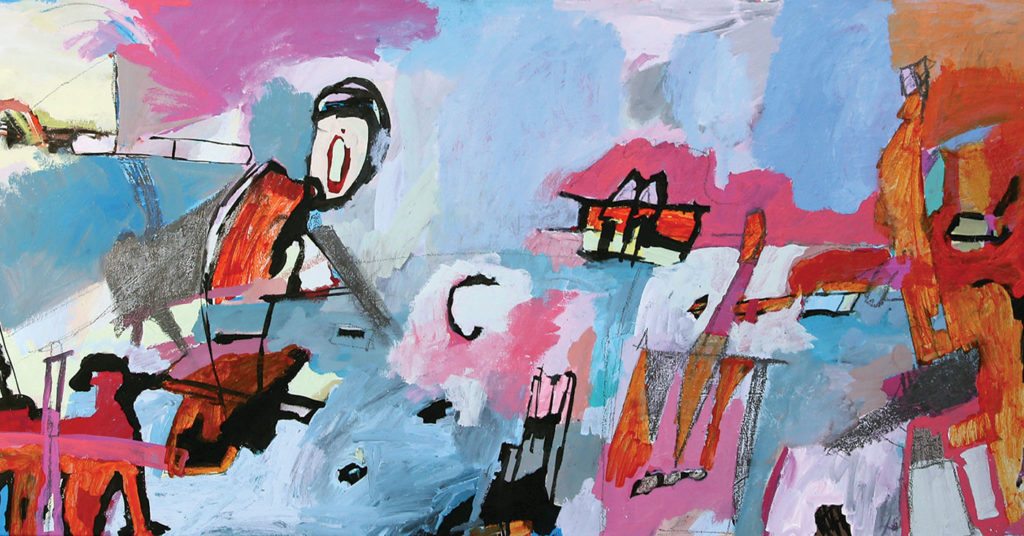 'Scream Then Set Yourself Free' by Andrew Murray

What did you think about when you read his name? His art, or his troubled life? Van Gogh is well known for his problems with mental and physical ailments. There’s even a Wikipedia page for “Vincent van Gogh’s health”!

His major mental health issues were bipolar disorder and borderline-personality disorder. Couple that with his physical illnesses of epilepsy, lead poisoning and malnutrition, and it’s fair to say art (and his brother’s support) helped him to live as long as he did (he committed suicide at 37).

For centuries, creativity has been debated as a mental disorder, albeit a good one. The exhibition “Touched with Fire” furthers the discussion about whether artists are artists because of a disorder, or because it helps them ease the pain.

Or disorders have nothing to do with it at all.

The 30 artists from eight states, including a familiar group of locals, work in a variety of media. The resulting exhibition is educational, strong and expressive; few words are necessary with art this emotive.

Cheree Federico’s “Intrusion” is a close-up photograph of two objects: barbed wire and a tree. Federico has a family history of mental illness, so she reads into the objects a meaning most of us would easily miss if not for her insight. “I immediately felt that the barb in the tree was much like mental illness,” she said. “Always present, most likely scarring, always intruding into the life and well-being of the person affected. The illness, or barb, most always pokes and cuts at the friends and families of the person with the illness as well.”

I am immediately reminded of Edvard Munch’s “The Scream” when viewing Andrew Murray’s “Scream, Then Set Yourself Free.” An oval, angst-filled, gaping mouth does that to me. He said he was going through self-doubt, anxiety and despair at the time he painted it, resulting in “the moment of renouncing that darkness and allowing myself to just be an artist.”

“Every Distance is Not Near” is a sculpture made by Cozad Taylor in collaboration with blacksmith/sculptor/gallery owner Craig Kaviar. They took the rifle that Taylor’s stepbrother used to commit suicide, and redesigned it into a bud vase.

When viewing Jacquelyn Marie Hamilton’s photograph, “Aunt Treva I,” you come face to face with a family tree of inherited mental illness. Hamilton superimposed her self-portrait atop a 1915 photograph of a great-aunt who spent the bulk of her life in a sanatorium.

“I have been hospitalized off and on since I was 19-years-old,” Hamilton said. “I often think about the time frame in which my [ancestors] lived … Their symptoms were much the same as my own, yet the way in which their mental illness was treated was remarkably different. I have spent the last decade telling my own story of mental illness with an ultimate goal to show that living with a mental illness does not mean one has to lose his/her dignity.”

It’s fitting that a portion of the exhibition sales will be donated to Bridgehaven Mental Health Services.