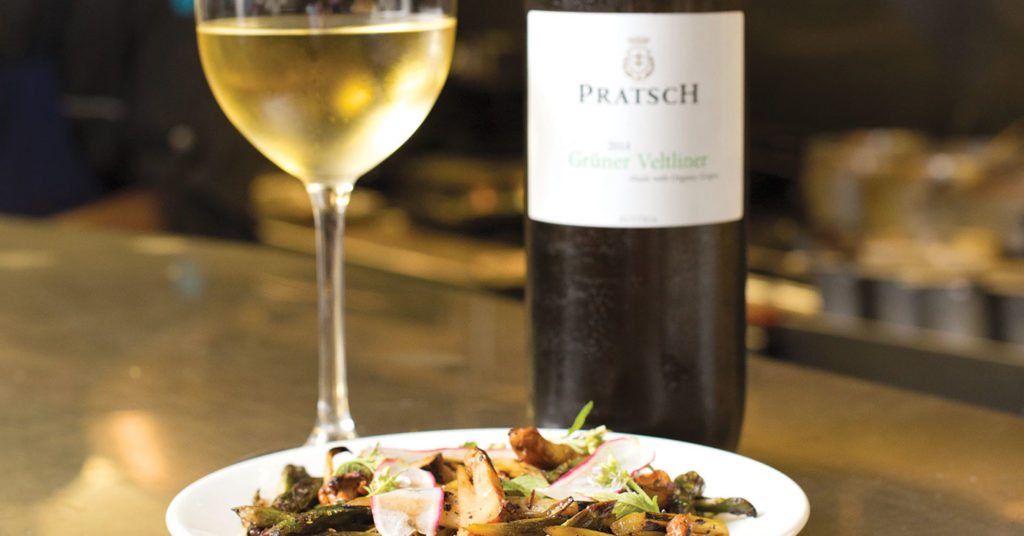 Charred asparagus, with chanterelles, arugula blossoms and and roasted jalapeño salsa verde, paired with a glass of Pratsch 2014 Gruner Veltliner at the Butchertown Grocery Photo by Edward Neary

It’s that time in Kentucky when buffet tables are laden with traditional favorites such as country ham, corn pudding, beef tenderloin dressed with Henry Bain’s sauce and chocolate desserts flavored with generous lashings of bourbon. Since this is the beginning of the fresh vegetable season, the earliest local greens will be on the table, too. Thin tender spears of asparagus are among those prominently featured.

The vegetable also crops up right now on restaurant menus in soups or as sides — variously sautéed, sauced and grilled. Recipes for it sprout on the food pages of newspapers, magazines and internet cooking sites.

Asparagus is even more celebrated in Europe, especially Austria, where May is tellingly known as Spargel-Monat (Asparagus Month). Check out the index of an Austrian cookbook, and you’ll find recipes for Spargel Hollandaise, Spargel Vinaigrette, Spargelbohnem (Bohemian style), Kalte Spagelplatte (cold platter, as in crudité), Spargelsuppe (soup — cream-based, broth-based or pureed), and even Spargel Sabayon (a concoction made with butter, heavy cream, egg yolks, shallots and lemon juice). In short, the Austrians are wild about asparagus.

Back here in Louisville, it’s pretty easy to take advantage of our own asparagus bounty. For full flavor, peel the thickest parts of the spears. (Pencil-thin ones are the most tender, and you might be able to get away with minimal peeling.) Drizzle with melted butter and a squeeze of lemon juice and sauté or grill. In fact, since it’s the beginning of grilling season, too — and if you’ve already set fire to the charcoal — grilling will be the better option.

Virtually any steakhouse offers asparagus as thick as your thumb year-round. But this was a late spring, so use your grilled asparagus as a side for lighter entrées, such as grilled fish. Here’s where another pairing might get tricky — Asparagus is notorious for ruining the flavor of wine.

But not all wine.

Remember the Spargel-philic Austrians? They also love wine, and the grape most widely planted in Austria, which is used to make the county’s most popular wine, is one of which you may not have heard — Grüner Veltliner.

I drank my share of Grüner Veltliner when I was in Vienna a couple of years ago, not only because it was widely available, but because it’s a wonderful food wine, and eminently sippable. The white wine is medium-bodied, crisp, a little spicy, and it is not at all affected by the pungent flavor of asparagus.

So I was delighted to come across Grüner Veltliner on the wine list at Butchertown Grocery. It is offered by the glass and by the bottle, and it was perfect with my lunch, which consisted of a salad and smoked trout. Chef Bobby Benjamin’s menu changes with the season (so check), and on my last visit, one side was a medley of morels, turnips, peas and — yes! — asparagus. And Grüner Veltliner still graces the wine list.

The next best thing about this wine, after its overall enjoyability, is that it is just flat out fun to say. Pronounced “GROO-ner FELT-lih-ner,” it is right up there with Châteauneuf-du-Pape (“shah-toh-nuhf-doo-PAHP”) as wine you want to drink because its name is so splendid.

Of course, there is no way to write about asparagus without mentioning the other aspect of its notoriety. It lends a peculiar odor to urine.

Ah, yes. Some of you will say, “I’ve never noticed.” That’s because a proportion of the population can’t detect the scent. It’s a matter of genetics. Just as some individuals are color-blind and cannot distinguish between red and green, some are “nose-blind” to the after-digestive effects of asparagus.

The smell comes from a compound found in asparagus called methyl mercaptan. It contains an atom of sulphur and is, therefore, rather whiffy. (Sulphur compounds are associated with rotten egg odors.) People don’t find it pleasant, but that doesn’t mean other animals are put off by it. Some even like it.

A sidebar in the article about asparagus in The Oxford Companion to America Food and Drink (ed. Andrew. F. Smith, 2007), offers this intriguing bit of asparagus trivia:

“… In World War II…the United States was rumored to have put asparagus in spy kits. Agents allegedly were instructed to eat the delicacy and urinate into oceans or rivers and lakes, thereby allowing the mercaptans to attract fish, making them easier to catch.”

The spy kit should also have included a split of Grüner Veltliner.