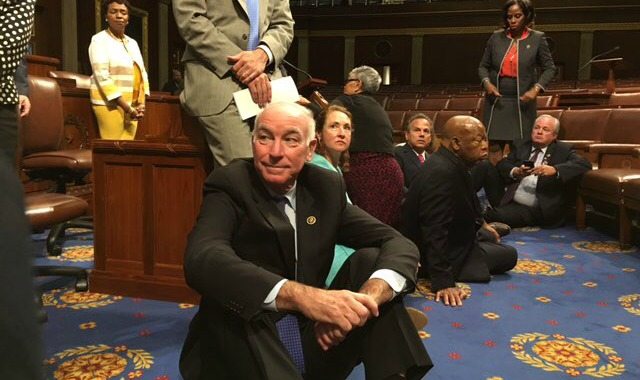 After a 25-hour House Democratic sit-in, Rep. John Yarmuth, D-Louisville, said he isn’t frustrated with only Republican leadership, which blocked bipartisan legislation meant to prevent people on the no-fly list from buying firearms. He’s also upset with the Democratic Congressional Campaign Committee, which, he said, tried to use the sit-in as a way to raise funds.

“Somebody was going to use our activity to raise money to elect democratic candidates — that adds a partisan and an electoral tarnish to what I think is a genuine, heartfelt position,” he told LEO on Friday. “That’s why I resent that.”

In the interview, Yarmuth also talked about how social media helped make the sit-in go viral after Republican House Speaker Paul Ryan adjourned the House session, cutting off the floor’s live CSPAN feed, which some say was merely an attempt to prevent the sit-in from gaining more attention. He also talked about what he thinks the sit-in accomplished and bipartisan gun legislation moving forward.

On what the sit-in accomplished, even though no legislation was passed.
“I think it accomplished a great deal. I don’t think that we ever expected Republicans to roll over and give us a vote on those two bills, but what we were trying to do is to elevate the issue and to highlight the fact that 90 percent of American people support these common-sense gun safety measures, and the Republican majority won’t even allow votes on them. So, the idea was to put pressure on Republicans, but more importantly, to try to raise awareness of what’s going on, and how unresponsive the Republican majority is. And, hopefully put public pressure on Republicans to change their stance. One of the problems with the gun safety issue is that the vast majority of people support them, but they’re not the type of issues that voters cast their vote on. They don’t vote on what a candidate’s position on those issues would be. They might be eighth or ninth or tenth on their priority list. Then, on the other side, you have the NRA supporters, and that is their top priority, so what we’re trying to do is elevate the issue on the priority list with a lot of Americans.”

On what divides Democrats and Republications on the issue.
“Allowing a suspected terrorist to have a weapon doesn’t make sense to anybody with half a brain. The problem with it is: If you pass no-fly list legislation, you also have to pass an expanded background checks bill, because if they can go to a gun show, or buy a gun on the internet, it doesn’t matter what you do with the no-fly list. Those restrictions have to go together, which is why there were two bills that we wanted passed, because one doesn’t make sense without the other.”

On the bipartisan gun legislation moving forward.
“There’s a bipartisan group in the Senate that is working on a measure that got 52 votes in the Senate yesterday, despite Mitch McConnell’s attempt to sabotage it. I’m working with a guy named [Rep.] David Jolly who is a Republication from Florida. We’re trying to get together on a measure that we would both support, that is kind of similar to the Senate Bill that got 52 votes. I think that there are willing parties on both sides, but, ultimately, in our case, it’s going to be whether leadership will allow even bipartisan support come to a vote. That’s the real challenge that we’re going to have. I’m sure we can find a piece of legislation that has bipartisan support, but the leadership is going to be a problem. Which is why we tried to do the thing the other day.”

I'm on the House floor with @repjohnlewis & Dems staging a sit-in to demand action on commonsense gun legislation pic.twitter.com/byIivby5gG

On how social media made the sit-in go viral after the news cameras were turned off.
“That’s something that I was astounded by. Before this activity started, I had 10,400 Twitter followers, and I now have 12,800. And, that’s after having a Twitter account for several years. More importantly, if it wasn’t for social media, the American public would have had no way of knowing, because it wasn’t on CSPAN. The organic nature of this, and the way it went viral, was truly astounding. It was [Reps.] Scott Peters from San Diego and Sean Patrick Maloney, he’s from New York — they were the two that did it, that came up with the idea.”

On why it was wrong of the Democratic Congressional Campaign Committee to try to raise money from the sit-in.
“From my personal position, I participated in that event because of a deeply-held passion on the issue, and I resent the fact that somebody tried to monetize it for electoral purposes. We didn’t do it for an electoral purpose. We did it because we wanted the policy changed. And somebody was going to use our activity to raise money to elect democratic candidates — that adds a partisan and an electoral tarnish to what I think is a genuine, heartfelt position. That’s why I resent that. I don’t think we should do that. I don’t think we should ever do it. I’m going to be taking a public step to criticize our party’s campaign leadership and then try to adopt some polices that will prevent them from doing that again.”