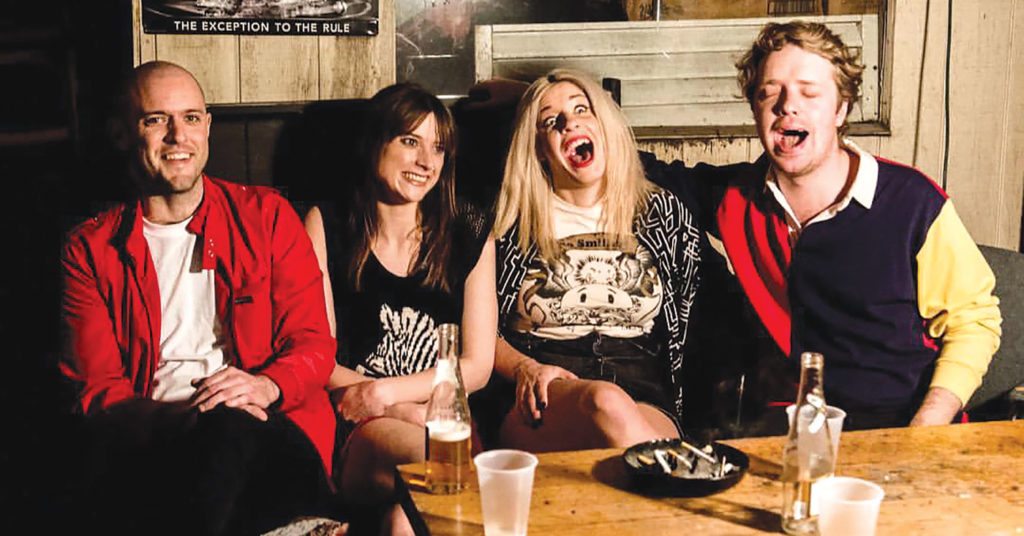 The garage-rock four-piece Brenda, which recently released the EP Night School, makes music that “gets stuck in your head after having a night,” according to drummer/vocalist, Brenda Mahler. “We all got ‘em! Those nights where you stay up too late, and have one to five too many, and wake up in a pool of regret, but secretly want to repeat it again. We try to encapsulate by not overthinking. We write and record as fast as possible. It’s like that baggie of skittles. You eat ’em, you miss ’em. But you can always buy another … depending on what time of night it is.”

It all started out simply enough with acoustic guitars and harmonies. Singer/guitarist Matt Horne felt the call to document his ideas, and the rest is history.

“I normally make annoying falsetto voice memos while driving to and from work,” Horne said. “For the last two records, those snips are brought into the living room, and Brenda and I fight with each other until it’s a song.”

In their brief tenure, the quartet has released only two all-too-short albums, both of which rely on solid pop hooks to catch your ear, and dig into what it is to be an adult still figuring it all out. They aren’t afraid to get silly, which, given all the rottenness in the world, is absolutely an aesthetic choice.

“There’s enough of that serious black-and-white stuff out there,” Mahler said. “It’s always been about Matt and I having a good time, and having fun with our friends. We have a network of very, very colorful, talented humans that we’ve come across throughout the past 10 years, and [they] have all lent their personality to this project, one way or another. That makes it super personal and special, and sometimes emotional for me.”

Continuing, Horne added, “It’s all about the energy man. Did the energy man put two of the same shoes on this morning? Is he robo-tripping at the gates of hell? Did the energy man drink six bangers — the equivalent of three whole red bulls — and has Jager eyes? Energy man makes the show. Sometimes, he stays at home with his girlfriend.”

Part of making those bangers work is knowing how to put it all together, which, structurally speaking, Brenda has in spades. They are unique for having two drummers, Mahler and JC Denison, both performing on stripped-down kits. Again, this was a deliberate choice, further proof that despite any illusions otherwise, they take pride in their craft.

“Well the two-drummer approach began with Brenda having issues singing and playing her drums at the same time — at this time, the bass drum was held up by a laundry basket,” Horne said. “We decided to bring in a second drummer to double Brenda’s parts, and over time she developed the ability to play and sing simultaneously. As far as no cymbals, we were looking to create a more minimal aesthetic. That, and cymbals tend to wash out guitar. As the guitarist, I couldn’t stand for that.”

Their sophomore release, the amazing Night School, is a blast of pure garage-rock goodness, never short on a solid hook. But it’s all about figuring it out, and maybe fucking up a little along the way. According to Mahler, the album reflects “the every day state of mind of knowing if you’re on the right track, whatever the eff that means. It’s when people stop telling you what to do every day, and the structure of that leaves you. For me personally, it’s ultimately knowing when to leave Nachbar.”

You can pick up their newest EP, Night School, out now on auralgamiSOUNDS at your nearest record store.