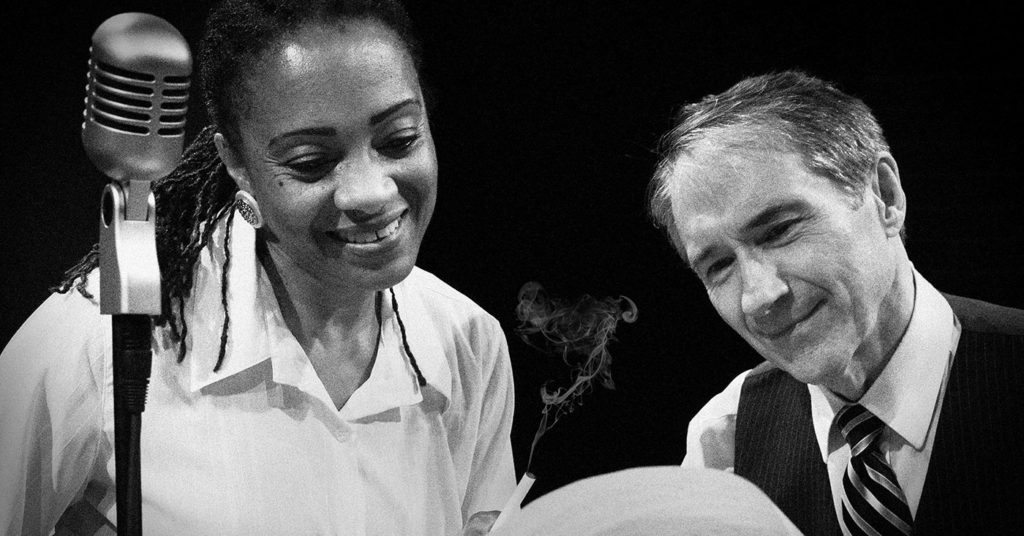 It hardly seems fair to write a theater review of Bunbury Theatre Company’s production of “Lady Ain’t Singing No Blues,” a new musical based on the life and songs of Billie Holiday. It’s less a play, and more of an excuse to listen to a gifted jazz performer, Leslie McCurdy as Lady Day, sing for a couple of hours. As the former, it fails. As the latter, it succeeds.

The script, also written by McCurdy, is set in 1958, while Holiday was in New York recording The Lady in Satin, the last album she would release during her lifetime. The action takes place during an impromptu rehearsal.

Holiday and a piano player, Chris (Steve Crews), sneak into a nightclub during the day. They plunk their way through one song when the bar owner (Mike Burmester) discovers them. He then invites/blackmails Holiday into singing a full set for his “friends,” the audience.

This is such a flimsy attempt at realism, I don’t know why the playwright bothered. It doesn’t ever feel real, and the characters of Chris and Bar Owner are never used for much of anything throughout the play’s two-hour runtime.

It’s doubly frustrating because it’s so completely unneeded. Show us a microphone, have Holiday walk up to it and sing, and tell stories; that’s all we need.

The audience seemed forgiving enough, especially once McCurdy started singing. She has more than enough technical prowess to deliver Holiday’s hits. She has lots of charisma and charm, too, though she’s automatically competing with one of the all-time greats. She’s not as good as Holiday, but she’ll do.

Steve Crews is clearly onstage because of his power as a piano player, not as an actor. He plays beautifully, wringing a wide range of sounds out of the single upright piano.

Despite the musical skills of this duo, the first act lags. We’re essentially being given a nightclub performance, except, since we’re in a theater, we don’t get to drink and carry on. Before intermission, the stories from Holiday’s life center around musicians she has known, and a couple of men she’s dated. It’s interesting in a PBS kind of way, but doesn’t work as drama. It also seems strange to have long passages of monologue dedicated to praising the musicianship of musicians we won’t hear during the show, and whose instruments aren’t being played by anyone onstage. For example, we hear a lot of Lester Young, the best sax player Holiday ever met. Then, we hear a sax solo he played … from Crews on the piano. That Crews plays the solo beautifully doesn’t really justify it dramatically.

I was starting to get pretty blue by the time intermission came around. I suppose Holiday is worth some light chuckles, and she had her share of party hits as well, but there is so much more to her legacy, and I was really hoping the second act would delve into the darker aspects of Holiday’s life.

I wasn’t disappointed. The transformation in McCurdy’s Holiday comes from one of the few working dramatic elements of the script: a pitcher of booze.

Holiday eventually died from cirrhosis of the liver, and in 1958, the setting of the play, she would have been deep into alcoholism.

Early in act one she requests a pitcher of something to drink, and Chris the piano player brings back a bottle of something clear, dumps it into a pitcher, and hands it over. I guess we can call the booze Chekov’s vodka, because as act two gets going, Holiday has been steadily draining that pitcher, and it is taking hold.

She begins to address some of the topics that put that deep sadness in Holiday’s music: her mother’s death, her heroin addiction and her abuse at the hands of several of her lovers.

The transition from sober Holiday, in control of her emotions and her audience, to a drunk women who cannot forget her past, saves the shows from just being a couple of pretty songs. It also allows McCurdy the chance to really dig into the deep place of sadness that she avoided in the first act, and it gives us some of the music that, in my opinion, really set Holiday apart from her contemporaries.

But just when I was really getting into that music, the framing device intrudes again. In order to introduce “Strange Fruit,” perhaps Holiday’s most famous and controversial song, Holiday leaves the stage to use the restroom, and the song is introduced as a rebuttal to an overheard comment in the bathroom. Or was the exit necessary to give Bar Owner and Chris a moment to point out that Holiday has had the whole pitcher of booze to drink, just in case someone in the audience missed it?

The monologue that follows delves into all the racism Holiday experienced over the years, her sexual assault as a child, the early death of her father and her harassment at the hands of the government, which she suggests came as retribution for releasing “Strange Fruit,” and playing it publicly.

After two hours, when pretty much nothing happens, enough action to fill several plays is thrown out in one monologue. It’s a very effective monologue, but one can’t help but think that information may have been more interesting than the discussions of string arrangements we listened to in the first act.

But then McCurdy sings “Strange Fruit,” and it’s every bit as gut-wrenching and powerful as one could hope.

“Lady Ain’t Singing No Blues” isn’t much of a play, but the powerful musical abilities of McCurdy and Crews make it a treat for Holiday fans and jazz aficionados.