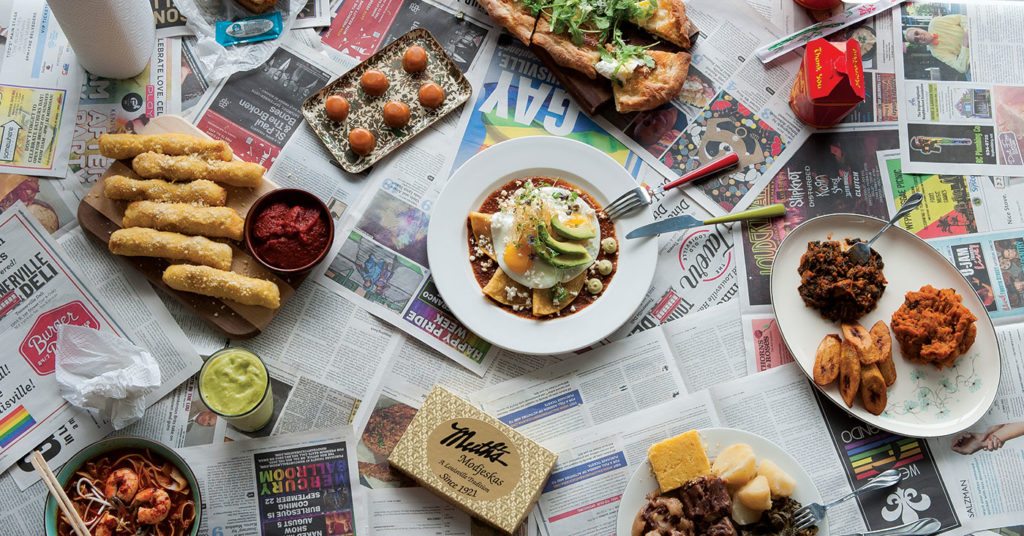 As Louisville has changed, so have our tastes. Signature dishes such as the Hot Brown and Benedictine sandwich are being eclipsed by cuisines that new residents bring with them, or that they reinvent here.

So if you moved away from Louisville, what local food or restaurant would you miss most? And if you returned for a visit, what dish would you want in your mouth as soon as you hit town?

We asked a range of locals to percolate on these questions. Not surprisingly, some found them difficult to answer. We are fortunate to live in a food-lover’s paradise, so picking just one favorite — and explaining your choice — can be daunting. Just one. How about just two. Or three. Or … four!

LEO food reviewer:
“When we moved from Louisville to New York City in 1990, I didn’t figure I’d miss our food. Back home four years later, though, I deeply craved one delight that seemed impossible to acquire in Gotham: Our familiar Fried Cod Sandwich on Rye. Who knew this treat was local? First day home we went straight to Moby Dick, an under-appreciated local mini-chain that, in my view, fries a fillet as well as anyone, and better than most. Sweet, flaky cod, cloaked in golden, crunchy cracker-crumb crust. Add simple sliced rye and a dab of tartar sauce, and our hearts warmed with Louisville comfort fare.”

chief executive officer, Hue Innovations LLC:
“Hu Tieu cay Trieu Chau (K6 on the menu) at Vietnam Kitchen is my recommendation. I love this dish. It is spicy (request that the chef make it less spicy, if you are not able to handle the heat), and it has a rich taste. It is essentially sautéed noodles with a choice of the meat (my choice is the chicken,) with bean sprouts, and topped with spicy peanut sauce. It is more a mix of Vietnamese and Chinese. I have never had any dish like it anywhere even in Vietnam. Before you leave there, after eating K6, you should try their Avocado Shake — a yummy milkshake made from fresh avocados and milk ,to cool off your spicy zing after K6.”

“If I ever moved away from Louisville, and came back to visit, I would definitely include Huevos Rancheros from Con Huevos, any seviche from Seviche, and my favorite, MW Ramen from Milkwood, among my stops. In addition, it would be impossible not to also stop at El Mundo for a great margarita, or to enjoy the Octopus Appetizer at (Proof on Main at) the 21c Museum Hotel.”

immigrant services librarian at Louisville Free Public Library:
“The Healer from the LIFEbar (at Rainbow Blossom) truly has a way of entering one’s system and curing whatever ails. Whoever thought adaptogens and ‘mushrooms’ mixed with blueberries could alight the mouth and heal the belly up to the cranium? One caveat would be the requested dosage of Maca. Many cultures, including Peruvians, proclaim its power as an aphrodisiac, so just be mindful who will be in close proximity after consumption. If that disclaimer tantalizes, then I would say move straight on through the menu to Let’s Get it On, which, rather, speaks for itself.

Going to Funmi’s is like a homecoming, as there, one often sees diners who one knows from the neighborhood, or from the far reaches of town. This Nigerian family often has its entire family on call, with warm welcomes from all, the best hugs from the cook herself. The menu indicates what dishes are vegan, and which are gluten-free. There are meat dishes, and an added bonus for the Muslim set, they are halal-designated. The best vegan dishes include Asaro, a yam pottage that will fill your belly on a cold day, and Eggplant Stew oozing with Kale and served with Plantains. Television screens show Afro-pop dance videos, or football being played around the globe. The vibe is homey, and a constant reminder that Louisville is, and always has been, a city of immigrant entrepreneurs adding to our tapestry of home.”

veteran food and travel writer:
“Artichoke Fritters at the Bristol Bar & Grille. These have been on the menu since the original location opened on Bardstown Road in 1977. I believe there are five large fritters to an order. They are battered, deep-fried to crispy golden brown, and served with a tangy, addictive rémoulade. On more than one occasion, I have made a meal of these with a pint of Pale Ale, or a glass of White Wine. Interesting, the much-newer Crescent Hill Craft House on Frankfort Avenue serves Artichoke Fritters, too. That kitchen’s version features four crispy, lemony fritters served on a bed of pureed celery root, and each is topped with a dab of béarnaise. They are equally splendid.”

professional artist with pieces in many private and public collections:
“I would definitely put Nord’s Bakery Donuts on the list. Their Buttercreams are perfect, with the right amount of decadence. Another spot is Danny Mac’s Pizza. Hidden inside a AMVETS meeting hall, Danny Mac’s “Crack Sticks” are carbolicious! In The Highlands, Louvino not only has a top-rate selection of wine, but they also have an incredible, warm Brussels Sprout Salad that I love. One more favorite is La Que’s String Beans with Tofu: It is a perfect combination with a gloriously hoppy beer!”

playwright, producer at Kentucky Black Repertory Theatre and former Courier-Journal reporter:
“The Oxtails and Potatoes at Big Momma’s Soul Food Kitchen, no doubt. Despite the inconvenience of being strictly takeout, Big Momma’s has customers lined up pretty much all day long for down home fixings, like Rib Tips and Sauerkraut, Stuffed Chicken Breast, Roast Beef and Gravy and Smothered Pork Chops.  Flavorful side dishes too, especially the Cabbage, which I hear has a fan club, and the Okra and Lima Beans. I developed a taste for the Oxtails after cooking a spicy Jamaican stew at home, and found Big Momma’s countrified version distinctly satisfying. And the upside to this little soul food kitchen being takeout is it’s located right across from the Broadway entrance to Shawnee Park, and can function like a picnicking depot. Instead of preparing and packing meals at home, just stop into Big Momma’s, pick up your food, and go.”

owner of Cellar Door Chocolates:
“Louisville’s burger game is pretty strong. I love all the Burgers at Grind, and I like that they get their beef from Foxhollow.  Pimento Cheese and Bacon on my burger is my favorite. I think Louisville’s signature dish is Shrimp and Grits. Jack Fry’s has the best. I am in love with everything Bobby Benjamin is doing at Butchertown Grocery.  His menu is the embodiment of Louisville food innovation. That Salad with the Blue Cheese Ice Cream is delicious. If I moved away from Louisville, the dish I would miss most is the Egg and Bacon Pizza with a side of Tomato Jam at Blue Dog. A close second is the Modjeska from Muth’s. I love those so much.”