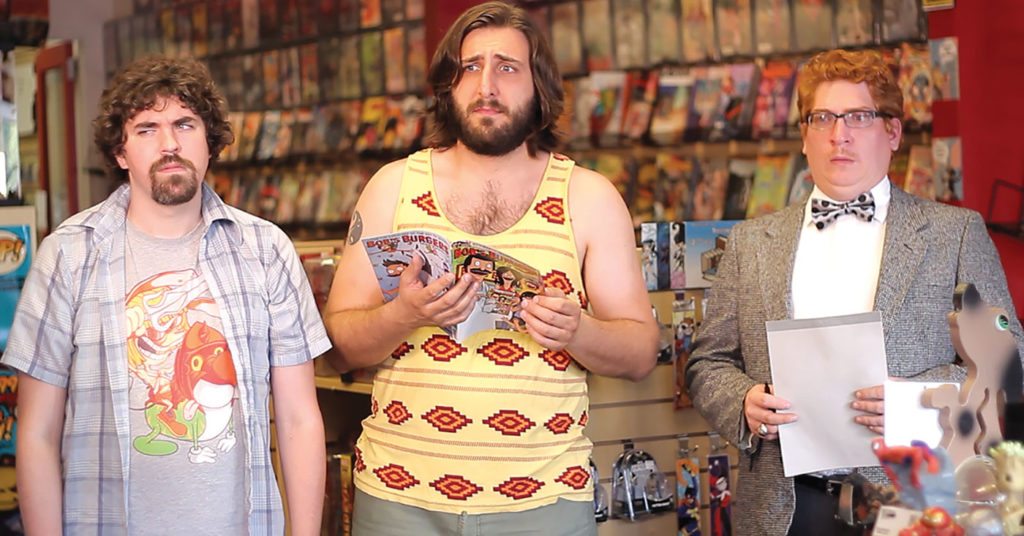 It’s a late May evening, at a table outside Kaiju in Germantown, and Matt Gaither, Sean Keller and April Singer are drinking beer and laughing at inappropriate jokes, as friends often do. They hardly resemble their character counterparts from the much buzzed about web series, “Bagged and Bored.”

“Bagged and Bored” is a hilarious, scripted web series that centers on Kent, the owner of a small comic book shop, and the eccentric regulars and staff that fill his life. It cleverly incorporates live action, special effects and animation to lampoon pop-culture tropes and reinvent the portrayal of nerd culture. “Bagged and Bored” lives on the web, on The Destination’s website (destinationcomics.com) and through YouTube.

Gaither’s primary function is director and producer of the show (he also plays Sonic Guy Steve), while April Singer plays the often conflicted Zoey Summers, and Sean Keller plays lovable weirdo Adam Shanks. The night I join them, they’re not talking as actors to their director, or even as collaborators and co-workers. Rather, they’re talking as friends, catching up, genuinely loving and missing one another since they haven’t been on set together for a while. I steer the conversation to “Bagged and Bored,” looking back, moving forward and examining what they might have learned over seven episodes and hundreds of hours of shooting “Bagged and Bored,” season one.

First, let’s look back. It all began several years ago when Gaither made the film “Zach Cooper’s Epic Speed Run,” a film that put Gaither in the orbit of Brian Barrow, owner of The Destination, a comic shop in St. Matthews, who wanted to sell the film in the store. “There was a lot of unlicensed stuff in that film,” Gaither said. “So I didn’t really feel good about putting it out for sale. So then Bryan just told me that if I ever needed a comic book store for a location, I should just use his.”

The offer kicked around inside of Gaither’s head until one night, after an ill-fated stand-up comedy show. Coincidentally enough, that show was held in the back of The Destination, however, no one attended, other than the comics and the store’s staff. Before the show began, Gaither overheard comedians (and pop-culture junkies) Kent Carney and Jake Reber taking comics off the shelf and improvising on what they were seeing inside.

“I thought: ‘That’s it!’ That’s what the show should be — two guys just riffing on comic books in a comic book store,” Gaither said. And with that the seed of “Bagged and Bored” was planted. He soon reconvened the two comedians at the store and shot what would be their pilot episode, known as: “Episode 0.” “I knew we had something good, I just didn’t know how good it was actually going to end up being,” Gaither explains. Once Carney and Reber were on board, Gaither began fleshing out the rest of the show, adding characters and an actual plot line that would be interesting enough to bring audiences back episode after episode.

April Singer was soon cast as Zoey, the sarcastic Manga enthusiast (Manga is a Japanese genre of comic books and graphic novels) with daddy issues. “Craig Williams (“Bagged and Bored” writer/comedian) gave me a copy of ‘Zach Cooper.’ And knowing what that was, being a student of film and all, and how good it was, just sold me on being a part of this project.”

But working on screen instead of a stage was a new experience for the actress. “Coming from a theater background, it took some adjustment to acting in front of a camera, because in front of a camera performance needs to be more subtle,” April said. “I look at myself in the first episode and I’m like: ‘Oh, that’s too much, that’s too big for what the scene needed.’”

The journey that was season one has been long for the actors, as they have grown into their respective roles. “When we started there were short character descriptions, but we’ve been free to improvise and experiment with these characters,” Singer said. “All I was given was: She’s a Manga expert, she does art and kinda’ dresses like Tank Girl. And I think what we as actors bring to these characters has begun to also direct where the shows are going. It’s been a nice exchange between director, writers and actors to see how these characters have grown.”

The shooting schedule could be rigorous at times, though. But that wasn’t necessarily a bad thing, Singer said. “Once we saw the first couple of episodes, and how high quality they were, and we saw what the guys behind the scenes, who don’t often get enough credit, were bringing to the table, it made the rest of us want to step our game up, as well.”

Even though as director and producer, Gaither was having to keep on top of budgets, actors’ conflicting schedules and countless other issues that come up with shooting a show, he tried to keep the atmosphere on the set light. “This is a passion project,” Gaither said. “There’s not a lot of money going into this, they’re not getting paid, so why would I be an asshole to the people that are giving me their time for free?” The actors understood the importance of staying late to get all of the shots, but their families didn’t fully understand what was going on all of the time. “Sometimes it was hard explaining to my amazing, beautiful and understanding girlfriend, or my daughter why shooting two pages of the script was supposed to take two or three hours, but ended up taking nine,” Keller said. But it was a short-lived frustration once they saw the final product. “Their thought was, ‘Yeah, you being gone really sucked, but this is totally worth it.’”

Now that season one is a wrap, they’re looking forward to season two, which they’re hoping to film early next year, but before that, Gaither wants to take some time off. “We really haven’t stopped since we started this. I just need a break. And now that people can see the entirety of season one, and see what an undertaking it is, and how good it can be,” Gaither is hoping to crowd source season two. “This has just become too big for us to fund on our own, and maintain the quality of work we know we’re capable of.”

The “Bagged and Bored Season 1 Finale Event” will be hosted by Sean Keller, with special appearances by the cast, behind the scenes featurettes, collectible T-shirts and more. And of course the main event of the evening they will be the premiere, “Bagged & Bored — Episode 7.” If you still haven’t seen episodes one through six, you can find them streaming on YouTube or on The Destination’s website.