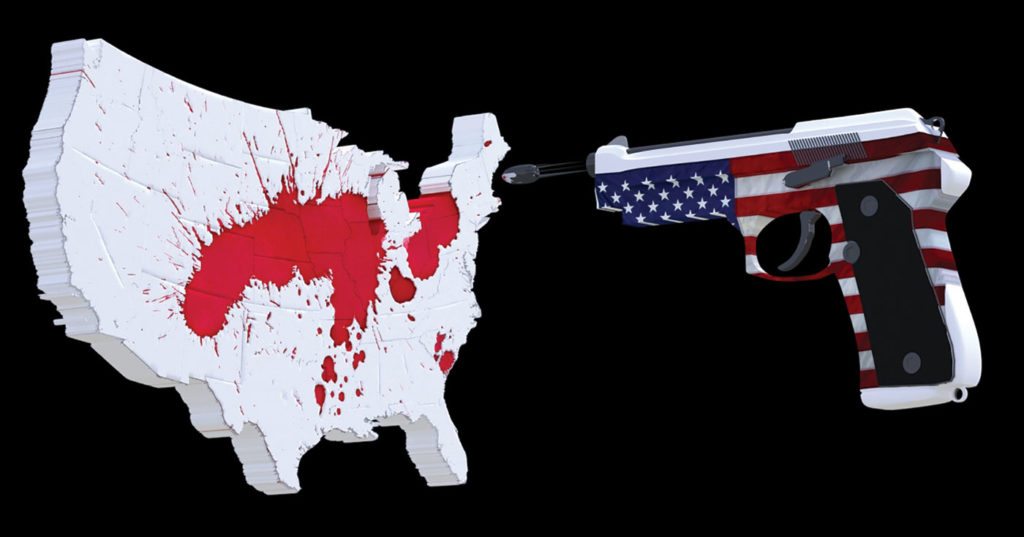 The National Rifle Association arrives in Louisville this week for its multi-day annual meeting, but the cavalry’s already come, people.

We live in a country — We’re No. 1! — in which guns in circulation exceed the population (more than 300 million served).

We live in a state — Unbridled spirit! — in which more than 42 percent of citizens are believed to own a gun.

And we live in a city — Possibility City! — that had 102 gunshot victims in the first three months of this young year.

The NRA convention is expected to bring 70,000 members to Louisville. Its 2013 Houston meeting drew more than a record 80,000 visitors. The group touts its 750 exhibitors in 500,000 square feet (that’s 11 acres) at this week’s conference, as well as celebrity appearances (Toby Keith and Lee Ermey — and Donald Trump was announced, too).

Conferees at “freedom’s largest celebration” might want to consider the following three things as they hear speeches about the Second Amendment, and the government’s agenda to control your guns and take classes including “Bad Reputation: Do These Guns Deserve a Bad Rap?”

—The gun show: Are these your people?

To get an idea of what might be coming to Louisville with the NRA’s extravaganza, which runs Friday through Sunday, I went to the National Gun Day Promotions LLC show at the Expo Center on a sunny Saturday in April, one of four such National Gun Day shows every year. I paid $12 to get in, had my forearm stamped with a handgun image and saw a couple of steps of the dizzying, queasy dance Americans do with both the Second and First Amendments of the U.S. Constitution as demonstrated on table after table of guns and displays of “historical” items.

A lot of vendor-tended tables were stocked with current and antique firearms, ammo, American military items, a smattering of Native American and World War II-era Japanese material. To this unseasoned observer, there was a noticeable amount of Nazi-related memorabilia in the hall. Some medals were displayed here and there, but that showing was punctuated by a couple of more expansive exhibits toward the periphery of the cavernous room. Among those, the small bust of Adolf Hitler and the old framed photo of shiny, happy youth waving swastika flags were memorable … beats me, though, about what they had to do with a gun show.

When I asked a vendor with a few Nazi medals in his displays of Lugers about this, including the swastika branded pieces, he said, “I’d rather have theirs than they have ours.”

A library at a different table wasn’t what it seemed. The innards of real books and jackets had been hollowed out to conceal guns, even bigger tomes for Glocks with “extended mag.” Vintage Jackie Collins titles and “The Joy of Cooking” were represented. The books looked as if they could have been props from “Columbo,” but they weren’t.

The expo center wasn’t clotted with browsers when I went — I saw some baby strollers and some wheelchairs among the mostly male, mostly white attendees — but maybe it wasn’t a peak time. I kept seeing the same middle-aged man who sported a “necklace” dangling with handguns.

In a post-show phone interview, Ron Dickson of Oxford, Ohio, who is listed as the contact for National Gun Day, would not divulge how many exhibitors were there, nor would he release attendance figures, and that’s before the conversation got stilted when I brought up the Nazi bunting. (His explanation of that: It’s part of history. It happened.)

The notes I took also rendered these moments:

I saw handguns with purple and pink grips.

The Clint Eastwood fan in me recognized any number of editions of the long-barreled, heavy-looking Smith and Wesson .44 carried by “Dirty Harry.”

There was a sign that read, “The greatest enemies of our guns are politicians and rust,” and another that read, “Guaranteed not to shoot — Neutered during the Clinton administration.”

I saw a “Trump That Bitch” bumper sticker that invoked a different Clinton, one about The Donald and Hillary Rodham Clinton.

Not many people were eating at the tables stationed at the food concessions at the corners of the room. I didn’t, either.

Now, I thought as I left, imagine this on steroids. That’s what the NRA is bringing to town.

A few weeks later, my next stop was a morning meeting with someone who doesn’t have to imagine anything. He has spent his medical career studying violence as a public health issue, trying to find “the root causes that make or permit one human being to shoot, beat or stab another human being.”

Dr. Bill Smock’s 60-page resume begins at the end with stints as a firefighter and emergency medical technician. Its most current listing is for his role as a police surgeon with the Louisville Metro Police Department.

Before his present post, he was an emergency medicine physician at University Hospital from 1990-2011, which provided him with his own take on guns, and the violence that comes with them. It also solidified his unique perspectives and passions regarding public health, victim advocacy, emergency medicine and forensics.

He channeled that experience into the Gunshot Wound Registry he maintained from 2004-10. No one continued the registry when he retired as professor of emergency medicine, although he is encouraged that two attending physicians there have told him they want to resume it.

An example of the registry report from January through August 2009 shows the array of data it provided, and the story it attempted to tell: Injuries by type (homicide, suicide, assault, etc., with assault topping the numbers), firearm-related hospital charges (in excess of $12 million, with assault costing the community more than other injuries, for that time period), insurance carriers (the majority were indigent), injuries by gender (mostly male), by race (in numbers, more Caucasians than African-Americans), by month (March had the highest incidence) and other demographic and geographic categories.

Smock estimates a gunshot wound costs $50,000 per person, on average — and that’s acute medical care, no follow-ups or rehab costs included. He said 80 percent of the gunshot victims had no health insurance.

Those were the numbers he knew. Reality was more vivid.

He cried with parents, holding his face close to theirs, holding their hands and telling them their son or their daughter had died despite doing everything he could to save them. He performed the same ritual with the wives of police officers cut down by gunfire. He traveled to other countries, to teach about the forensics of gunshot wounds, and he was confronted by the same question: What was wrong with the United States? His answer: Access to guns.

On the computer he brings to the meeting, Smock is able to summon pictures, text and graphs to illustrate the points he makes. But nothing is as powerful as his stark language as he talks of the senseless loss of life, and the ruined lives that remain:

For every death by gun violence, four or five people will live, and many of them will have medical needs their entire lives, he said: “There are consequences when a bullet strikes human tissue,” he said. “We should tax ammunition to cover the healthcare costs associated with that bullet.”

He shows a picture of a new bullet called the R.I.P., whose hollow point opens like a flower upon entry into its target, and showers shrapnel inside that target. The “radically-invasive projectile” is billed as a “one-shot man-stopper.”

And then he pulls out his phone and offers connections to people who can provide even more context to guns and our community.

— Gun violence does not end with a shot

We know the numbers by now. Rather, we should.

Eighty-four homicides in Louisville last year. Of those, 71 were gun-related. There have been 33 gun-related homicides so far this year. As for Louisville’s 102 gunshot victims in the first three months of this year, most are young, most are African American, most are males and most cases are open.

But taking a page from Dr. Smock, the public that pays for these numbers — in costs to flesh and heart, to community reputation, to medical facilities and court, justice and law-enforcement systems — needs to see another part of a story that is so big that it can’t be told in a one sitting or setting.

It is told in a tear that slips from the eye of a grandmother, Onda Brown, who mourns the January shooting death of her dimpled, 8-year-old grandson, Andre Lamont O’Neal Jr.

It is told in the powerful voice of her spouse, Luther Brown, whose Little Hands, Little Feet gun safety class for children will have its latest graduation this week, the day before the NRA begins its annual meeting here. He started the program before the death of their grandson in answer to daily news of shootings: “People in the community are starving for answers and solutions. Grandparents have to get involved,” he said. Twenty-year-old Elgin Anders Jr. has pleaded not guilty to a charge of reckless homicide in the boy’s death; the family has questions about what he said about the shooting.

And it is told in how another grandmother, Ernestine Tyus, gets up and retrieves a large, clear plastic bag. It contains the rod and screws that were once inside her 10-year-old grandson, Ki’Anthony Tyus, holding together his shattered right femur after he was hit by drive-by gunfire last year while playing at a park.

He wasn’t in the wrong place.

Ms. Tyus says no one has answered for Ki’Anthony’s shooting.

It is told in the crossed-arm stance of a mother, Monique Reed, who says she is looking for a new place to live in order to protect her children. One teenage son, Tay, already was hit and wounded last year by a stray bullet too close to home. Ms. Reed says no one has answered for shooting Tay in the back.

Familiar themes crop up in conversations with these three West End families.

Guns too easily obtained or available.

The fear that comes with guns, and paralyzes people from acting or getting involved.

“It’s been too late a long time ago,” Luther Brown says, days before the NRA’s “freedom’s celebration” with its “wall of guns” comes to town. •

Pam Platt is the former editorial director of The Courier-Journal.