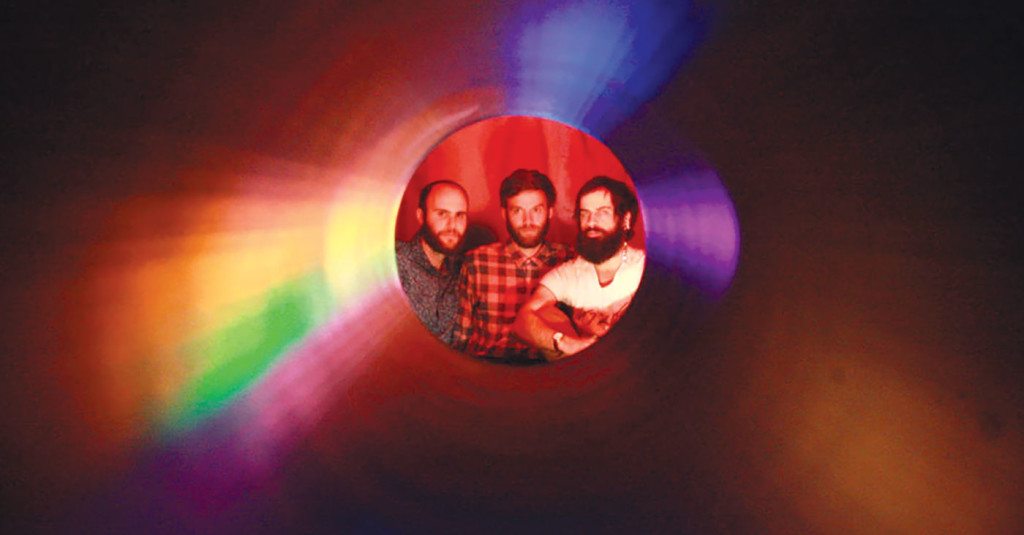 Jacob Weaver: The name came when my girlfriend and I took a trip to Mammoth Cave a couple years ago. We were deciding on which path to take and saw the ‘Violet City Lantern Tour’ listed. I thought it was a beautiful combination of words. We were told it was guided completely by lantern light through the historic part of the cave. Unfortunately, the day’s last tour was already in progress, so we opted for one of the more common routes. The name stuck with me, and, at the time, there seemed to be a lot of coincidental happenings that gave the words significance. The cover of the album is a stereographic photograph of ‘The Altar,’ a feature in the cave where, in the past, people often married. What stuck out to me about the image was that upon first glance it appears to be a picture of the sky. I loved that juxtaposition. It seems to represent the album in a way that I couldn’t have planned. I only knew vaguely of the failed tuberculosis colony. It’s a lot to think about. It’s strange that people would choose to make their home away from the sun, in a place that’s almost completely unknown to them. I’m glad there is such interesting mysteriousness so close to home. I need to take advantage of it more often. I need to take the ‘Violet City Lantern Tour,’ finally.

LEO: Speaking of influences, your track, ‘I Dreamt I Had a Motorcycle,’ on the 2015 compilation River City Rumble (a motorcycle-themed Louisville music compilation) is a standout due to its unique soundscape and imagery about the connection between rider and machine.  How did you prepare during the writing of this song? Was there actual motorcycle racing involved?

JW: ‘I Dreamt I Had a Motorcycle’ was one of those songs that came right out. No racing involved. I thought about my friend Paul, he’s probably the only person I know with a motorcycle. I don’t think I was completely aware of what I was doing while writing and recording. The whole thing was sort of a rush job to meet the submission deadline, so it took me slowing down and stepping back to realize what the song was. It’s a sad one.

LEO: Much of your music could be considered psychedelic. The end of the video for the title track of Violet City Lantern has the band literally immersed in a purple haze. Do you identify your music as part of the psychedelic genre and how literal do you take your musical exploration?

JW: I identify in terms of the ambitious nature of the genre. I guess I hope someday to transcend that word, but for now it’s fine. I feel that creating and exploring is the best help I can give myself in life. I’d like to discover the extent to which Murals’ music could help others but they have to buy the records first.

LEO: I first came across the music of you and Rob [Monsma, also of Murals] back when you had a band called Pure Dirt with Brandon Lawrence. I wouldn’t call the music gospel, but your track on the Louisville Is For Lovers 2009 compilation, ‘Is It True?,’ is one of the most gorgeous religiously-themed songs I have heard. Could you speak of this and the influences for Pure Dirt versus the influences for Murals?

JW: I’d say Pure Dirt’s influences were very similar to Murals at the time. I remember having the Everly Brothers and Simon and Garfunkel in my head when writing or playing with Pure Dirt. A lot of the songs were based on the musical relationship of Brandon Lawrence’s guitar and mine. He’s a great player — and singer — and we really tried for a closely woven, intimate guitar (and vocal) sound. Most of those songs were written based on little guitar duets. ‘Is it True?’ was written when I was 19. I spent every Sunday and Wednesday of my life with my parents in church, and I think the song is just about having questions about, what I felt, such an upbringing would have me know.

LEO: On your last tour, you and Rob also served as the backing band for Idiot Glee. Will there be further collaborations with James Friley of Idiot Glee, and what other projects are you and Rob involved with?

JW: We’d both really love to collaborate with sweet James sometime. I imagine we’ll play together again, hopefully soon. Other projects I’m currently involved with are Sketching, Family Dog and some stuff on my own. I think Rob’s been working on some solo stuff and playing with a funk band that’s in the works. I think their name is Sex Juice.

LEO: Besides the May 6 show at Zanzabar, what else is on the horizon for Murals, and is there another tour in the works?

JW: We’ll be recording new music in May. Heading up to the Milwaukee Psych Fest May 7 and playing a session with Daytrotter on the ninth. There’s a tour in the works for June. Gonna be a good one. Dates coming soon.