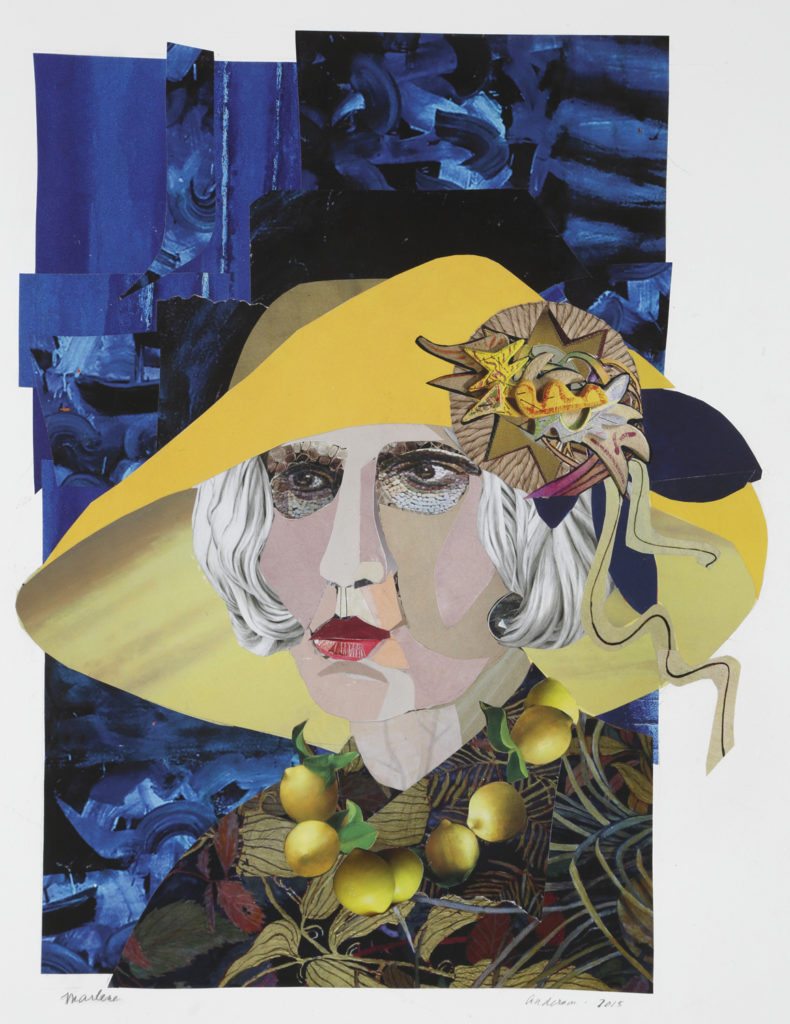 Ann Stewart Anderson (annstewartanderson.com) is one of our local treasures. As a living and breathing embodiment from her series “Wonderful Old Women,” she continues to make art and will have new work in a group show at Galerie Hertz later this month.

LEO: What type of artist are you?
Ann Stewart Anderson: Interesting question. What I do as an artist is who I am. I am my happiest when I’m making something. Charcoal, pencil, ink, anything to make marks. I love the rush of making art and I even love the hard moments of despair and things just will not work. My subject matter is WOMAN. I am interested in depicting woman not as OBJECT (a figure of sexual desire or an anonymous still life). I create women who are SUBJECTS … The ‘Women in Conversation’ series, inspired by the criticism of gossip and nattering, when actually it is in talking with other women that we learn important things and to pass on our cultures and beliefs. I also painted a ‘Women Shopping’ series. People criticize women for shopping, but it moves the economy. These series to address issues that often depict women in a negative light, in an attempt to illuminate more subtle complexities about women’s issues.

LEO: When did you start making art?
ASA: I started making art as a child; in fact. I do not remember my first
paintbrush. My mother was an art school graduate and so I received lots of
encouragement.

LEO: You worked with internationally known artist Judy Chicago. How did that come about?
ASA: The Louisville Visual Art Association received a grant to set up a project
called ‘Collaborative Effort.’ At a meeting on this project, someone suggested to [me that I] ask Judy Chicago to see if she might be interested in participating in this effort … Chicago accepted … [and I] suggested that [we] work on the topic of menopause, and Judy agreed. [We] named [our] creation ‘The Hot Flash Fan,’ a huge fabric fan, 8 by 16 feet, depicting the myths and truths about menopause. The ‘Hot Flash Fan’ is now owned by the Kentucky Foundation for Women.

LEO: How did your art change after being diagnosed with Parkinson’s
disease?
ASA: I began making the paper mosaics before I was actually diagnosed, so
I am very blessed that there was no abrupt and traumatic need to search
for medium because of the illness. I have not developed the hand tremor
yet, [a common] characteristic of some forms of Parkinson’s. I love doing
it, and it turns out to be perfect for me because it involves no heavy
lifting, schlepping artwork around, shopping for art materials [or] shipping
heavy cartons. There is no driving, and even very little walking required.
I’m making work which is continuing my interest in portraying women at
various stages of our lives. And, not only am I continuously involved in
this project, I have been fortunate to find an audience who appreciate it
and support me in my efforts.

LEO: I love ‘Wonderful Old Women.’ What inspired you to begin the series?
ASA: Several thing came together serendipitously. I had a big stack of Art in America magazines that I just could not put in the recycle bin. A friend
loaned me Molly Peacock’s book, ‘The Paper Garden,’ which is about Mary
Delaney, an 18th-century woman who, at the age of 72, began cutting and
gluing paper to form images of flowers, which are now in the collection of
the British Museum. And I was, after six years, tired of the deep rings
around my eyes made by the goggles required in cutting the china for the
broken dish mosaics. The paper mosaics were a logical and perfect transition.
This work continues my engagement with depictions of women … These women age with aplomb and grace. They are individuals who celebrate their long life, fearlessly donning stunning dresses, unique jewelry and fetching hats, which are accented by their inevitable sags, wrinkles and age spots.
By limiting myself to the paper from art magazines I not only find a way to recycle the periodicals, [but] I also challenge myself to create garments and
adornment from images, which had originally been sculpture, painting, photography and architecture — essentially making new art from the work of other artists. I relish the fact that I am creating elderly ladies with paper from magazines whose ‘news’ may be outdated, but which I reformulate to produce women, who are powerful and secure in their sense of style and their courageous zest for living.