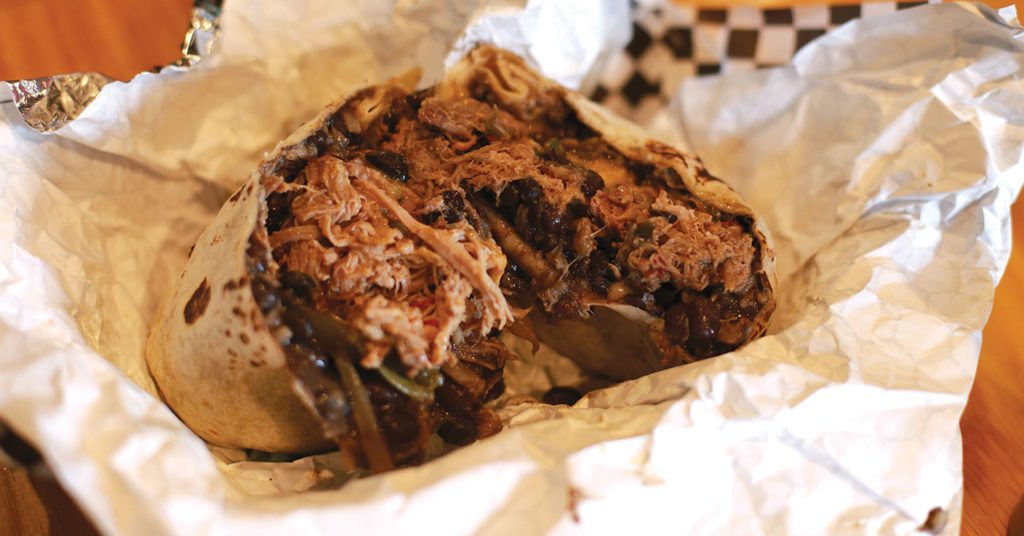 You’re six drinks in at your favorite Germantown dive, it’s past midnight and your Vietnam Kitchen clay-pot catfish dinner is but a delicious and distant memory.

You’re hungry, your choices are limited, and there’s a three-hour wait for a consistently less-than-fantastic delivery pizza from Spinelli’s.

You go for a pit-stop in the men’s room contemplating another bag of chips from the rack, a meager drunk’s dinner, when God’s grand party plan for getting a whiskey sponge in your gut is revealed; grace in the form of a flyer posted over the urinal, of all places: New Wave Burritos, delivered.

You blow off the bros banging on the stall door, make the call and, before you can stumble to the bar for an ill-advised seventh cocktail, a bike-riding angel of mercy delivers unto you an 18-ounce swaddled bundle of cheese and meat salvation, hot and savory, and a better drinking companion than the googly-eyed warthog you might have taken home under less-sated circumstances.

It’s not the quality of its offerings, surely. Everything is house-made and mostly well-executed, but as my friend and dining companion, Chuck, explained over dinner there last week, what we eat alone in the haze of a drunken hour is different than what we’re willing to consume in front of a new lady friend while on the make.

New Wave neophyte Chuck wouldn’t be dissuaded from ordering a burrito and side for himself despite my warnings as to their sizes. Choosing the Garbage Burrito (ground beef, pickled jalapeños, black beans, rice and queso for $9) from the five on the menu wasn’t too difficult. It’s always nice to see menus pared down to just a few things done very well. Handing guests a novella of a menu designed to cover every conceivable taste is a rookie restaurateur mistake and a sign to keep your wallet in your pants.

These guys are pros, obviously, judging by the stellar quality of just about everything we tried. I chose the Basher Burrito (coconut-braised adobo pork, black beans, rice, fajita vegetables and Monterey Jack for $9), which also was excellent. The round flavors of coconut complemented the rich and generous measure of shredded pork nicely, but the adobo was a ghost, barely making an appearance and vanishing by the second bite. They must be operating on razor-thin margins. In most restaurants beans and rice are usually in a burrito to add bulk, stretching expensive meat and saving money. New Wave, however, doesn’t skimp on the meat, providing a fantastic value.

Of the two sides we tried, the esquites (grilled corn, chiles, mayonnaise, lime, cilantro and queso fresco for $4) stole the show. Based on a Mexican street-food staple, elote, which is typically served on the cob, New Wave cuts the kernels off, allowing you to shovel them in unimpeded, which I greedily did. If you’ve never experienced this treat, do it here, because it’s the best in the city. I can imagine ordering this side to-go by the quart if they’d let me, cost be damned.

The Raunchy and Ranchy corn tortillas ($3) didn’t live up to expectations, however. We ordered them with three sides (queso, guacamole and tomatillo), a $5 option. The guac was suitably garlicky, but it lacked even a hint of cumin. We both agreed that the tomatillo was overly sour and acidic, and that the queso seemed like Velveeta and Ro*Tel, pure Super Bowl party stuff, which is fine and good if that’s your thing. I was assured by one of the owners that it was made in house, and I believe him, but I really don’t understand why anyone would go to such extreme lengths to produce what tastes like homemade Velveeta queso and not make it better.

New Wave Burritos seems to be doing everything right, but in comedy and restaurants, timing is everything. Hopefully its massive burritos will find a dinner-hour audience in the months most diners are looking for lighter fare. Only time will tell.