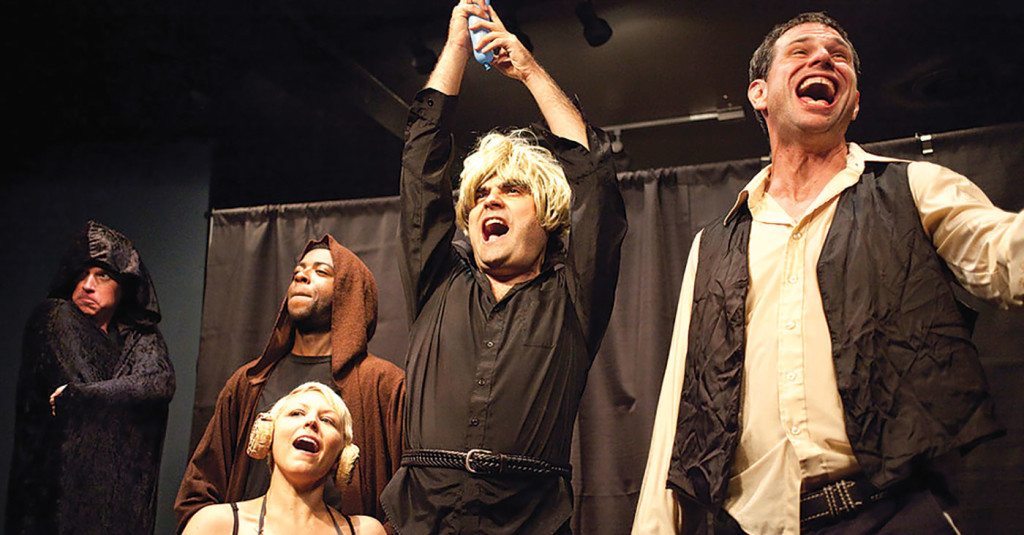 George Lucas enthralled generations with a fantastical sci-fi journey filled with light sabers, Death Stars and a transient force known as… well, The Force. It was a spaghetti-Western driven by anti-heroes with names including Skywalker, Han and Obi Wan, who came together to fight a looming darkness. The original trilogy spanned a total 376 minutes of absolute science-fiction bliss, and who could have known that, in 2016, The Bard’s Town was going to truncate Lucas’ nuanced, intricate story into 60 minutes or less? As has become tradition on “Star Wars” day, May 4 (May the fourth be with you — get it?), The Bard’s Town will reprise its semi-scripted/semi-improvised show that captures the most important parts of “Star Wars” lore in one hour-long show filled with humor, sarcasm and a little bit of fan service to the Lucas loyal. April Singer, who plays Zoey on the locally produced web series, “Bagged and Bored,” will be tasked with taking on the iconic role of Princess Leia, and she took a few minutes to chat with us about her relationship to the source material.

LEO: Would you consider yourself a ‘Star Wars’ nerd?

April Singer: Yeah. I didn’t really come into it until I was an adult, and when I started doing this show, the more I started watching the movies, and I discovered how much fun it was to be part of this culture.

LEO: Some ‘Star Wars’ enthusiasts hold this story to be sacred. Does that add pressure for you all?

AS: So far we’ve had a great reaction. It comes from a place of love. Everyone in the cast loves ‘Star Wars,’ and though we make fun of things about ‘Star Wars’ in the show, it really does come from such a place of admiration and love for the story.

LEO: What do you think it is about ‘Star Wars’ that has made it transcend so many generations now?

AS: The friendship. The Han-Luke-Leia friendship is the guiding force, and I think you see that again in the new movie — they’ve taken that concept of three friends trying to make their way through this universe. I think that’s why people related to this one so much more than they did the prequels, because they found that trope again and made it work.

LEO: Speaking of ‘The Force Awakens,’ do you have any thoughts on Rey’s parentage?

AS: I think, obviously, at the end we’re supposed to think Luke is her father, but that seems too easy. I’m hoping for something more than that. But as to who? I don’t know yet.

LEO: How do you think your character Zoey from ‘Bagged and Bored,’ who works in a comic book shop, would like this show?

AS: I think she would enjoy it. ‘Star Wars’ and sci-fi aren’t her biggest interests, but I think she would have fun with it. She would probably go along with the guys and make fun of them for geeking out over it so
much.