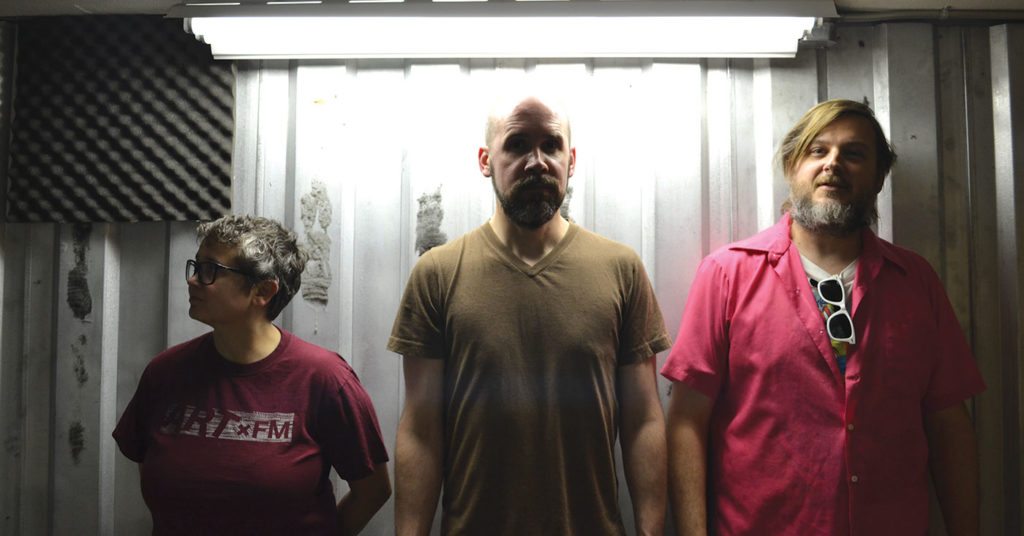 In the best possible sense, killii killii is a hard band to pin down. Theirs is a long and storied heritage unique in that pastiche blend of styles that is part and parcel to the Louisville sound.

A trio, the band has a wide dynamic range that manages that angular, minor key rage that seethed in bands like classic Louisville staples Slint and Rodan, tempered here with a healthy dose of New Wave punk and a solid pop groove. The bass and drums plod, and the guitars and keys are as apt to provide texture as any specific riffage.

This Saturday, the band is poised to release their debut EP, the wryly-named I Believe in Rollerblading.

Their wit and musical prowess are as much a reflection of their mutual respect as it is their environment. Bassist Salena Filichia offers an outside view on the effect of the city’s musical landscape as an influence. She said, “In rural Kentucky, there is nothing. No landscape. No land. Just darkness. From coal stacks. Louisville is like the pot of musical gold at the end of the brightest, shiniest rainbow, and in that pot of gold are the best musicians in all of the universe.”

That tongue-in-cheek sense of humor is a distinct part of the band’s charm, and one possessed admirably so by Filichia. Easy conversationalists, the members of killii killii have that sort of humble charisma that underscores how approachable and relatable they are. Alongside drummer Forrest Kuhn, the two were originally a part of the all-too-short lived band, Madame Machine. After that band’s demise, the duo began collaborating with guitarist/keyboardist Dan Marshall.

Kuhn said, “killii killii was hatched from an egg, which begs the question, which came first? killii killii does not know why it came to be and is unaware of which direction it is heading. In fact, killii killii has very little self-awareness overall. Also, killii killii is comprised of three people who like playing music together.”

Marshall added, “Every path in our lives leads to Madame Machine, and now from it.”

As such, killii killii constitutes a fresh start in many ways, and the new album stands as a testament to the handcrafted spirit of punk and indie. Kuhn said, “We don’t have any sort of label support for this. It is pretty much DIY. We collectively don’t have high aspirations. Whether it is important in general to have a label in 2016 depends a lot on what that band wants to achieve, and what their goals are. Our goals are fairly simple. We like to play music together and write songs that we like, and play live, and record pretty much for fun.”

The fact that their debut is an EP is due to that lack of any formal label support. Marshall said, “EP are the last two letters of ‘cheep’ which is a different way to spell what our budget looks like. Albums are harder to put out. EPs keep it fresh and dope.”

Quick to joke, Kuhn said, “Albums take a lot of work, and EPs are for bands like killii killii who don’t have time for hard work.”

Jokes aside, the band exists as a collaborative effort that, while perhaps not work, is certainly the result of a mutual respect for their craft. Kuhn said, “Songs are never really done. It’s always a collaborative process and our songs are always evolving. While we don’t do much improvisational work at a live show, we are always kicking around new ideas about old songs. Or Salena gets a new pedal.”

Filichia said, “We will play every song from the EP, and someone will get the EP and wonder why we didn’t play those songs.”

Like many artists, the band has had to rely on the internet as a promotional resource, although that decision certainly comes with some consideration. Kuhn said, “killii killii is on the cutting edge of technology with their Facebook page. We have posts and likes and links and stuff. In general, the internet seems to be a great vehicle for relatively small bands to reach larger audiences. At the same time, in a lot of ways, the internet, with the focus on single songs, seems to discourage the concept of albums for bands.”

Still at the end of the day, it’s about putting on a great show. Kuhn said, “A good show doesn’t always have to do with the precision of a performance, but more so the energy level of the band and audience. What constitutes a bad show is when the band isn’t having fun with what they are doing.”

Of their impending show Filichia said, “We have several special guests helping us out with our songs and other people’s songs. After our show, we hope that the audience also believes in rollerblading. I know we do.”