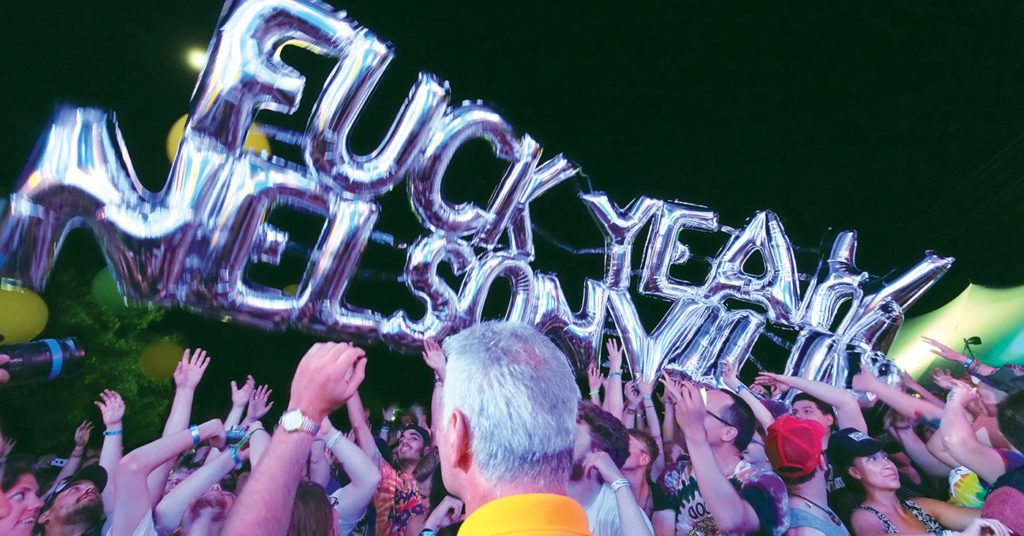 The Flaming Lips donated this message to the audience at the 2015 Nelsonville Music FestivalPhoto by Dennis E. Powell / The Athens News

I’m not sure if the festival bubble will burst (or if it already has to some extent), but, as of now, there are plenty to choose from, covering all sizes and price ranges and extending far beyond Bonnaroo and Coachella. Here are five festivals between one and six hours away that are worth traveling for.

Nelsonville, Ohio
June 2–5
Drive Time: 4 hours
“It’s the perfect size festival. Any bigger and you’d lose something,” musician Andrew Bird said of Nelsonville, which is the perfect way to sum up this no-hassle festival that punches above its weight. The stages are less than five minutes apart, including a large main stage, a porch stage that’s about the size of a mid-size venue like Headliners, a boxcar stage that’s new this year, and a no-fi cabin stage that is basically an old rustic shack that allows you to hear an up-close set of some of your favorite acoustic artists. The 2016 lineup features Randy Newman, Gillian Welch, Gary Clark Jr., Courtney Barnett, Mac Demarco, Angel Olsen and Charles Bradley & The Extraorinaires. A weekend pass runs for $155 and day passes are either $50 or $75, depending on what day you go.

Milwaukee, Wisconsin
June 29–July 3 / July 5–10
Drive time: 6 hours
One of the most unique music festivals in the country, Summer Fest isn’t about being there the whole time and, sometimes, even planning around headliners. It runs for two separate extended weekends, it’s only $20 to get in each day (multi-day discount prices are also available), which includes access to every stage except Marcus Amphitheater, where the headliners play and tickets have to be purchased separately. It works well, especially if you plan on being there for several days, because there will usually be a headliner you don’t want to see, and you won’t automatically be dinged for the premium price to see a big name. For example, if you’re there on Thursday, July 7, and you don’t want to see Luke Bryan, then you don’t pay the $50-$100 bucks to get into the amphitheater. Instead, you just pay the $20 cover to see The Decemberists, Violent Femmes and The Preservation Hall Jazz Band, among many others.

Lexington, Kentucky
Aug. 27
Drive time: 1.5 hours
A one-day music festival hosted by our neighbor to the east, Moontower makes for a good day trip, and features Manchester Orchestra, Drive-By Truckers, Trombone Shorty, The Floozies and more. At $49, it won’t impact your bank account too much, especially since there’s no worries about a place to stay.

Chicago, Illinois
Sept. 16–18
Drive time: 4.5 hours
There’s already some controversy surrounding Chicago’s Riot Fest, as Morrissey is being very Morrissey and saying that he never agreed to play this festival after the lineup was released. It’s probably some elongated argument over the festival serving hotdogs or something, but whether he shows up or not, the lineup is pretty interesting: The Original Misfits, Ween, Death Cab For Cutie, Death Grips, Bad Religion, GZA, Dan Deacon, White Lung and more. Right now, three day passes are $168.98.