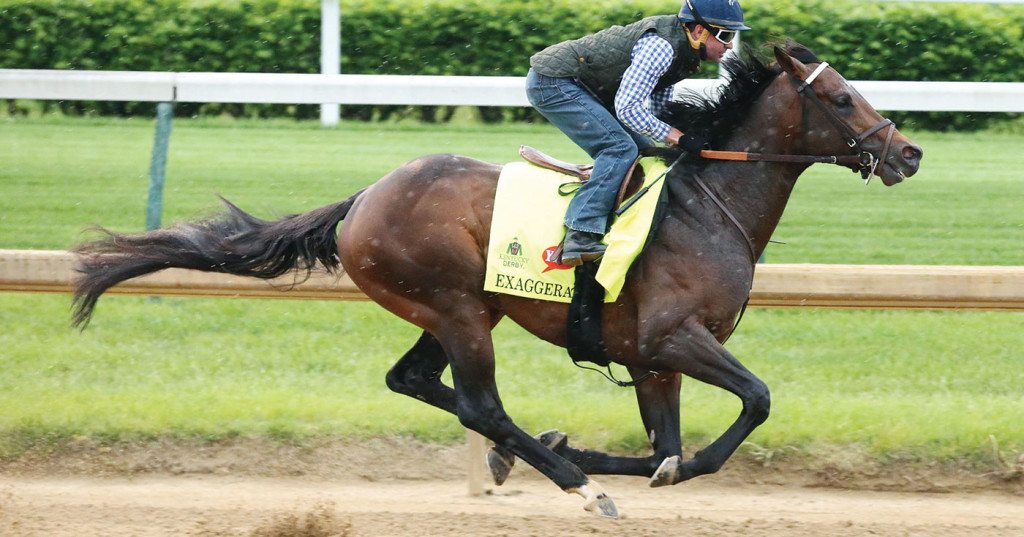 Exaggerator during a morning workout

You don’t get extra credit for a Triple Crown winner, or less for a one-shot wonder. No more for Secretariat, and no less for Broker’s Tip, the winner of the 1933 “Fighting Finish” Kentucky Derby. It was the only race Broker’s Tip ever won — with the rest of his career amounting to about the same as any broker’s tip.

But Broker’s Tip did win the Derby, and he takes his place in history, commemorated on the official Kentucky Derby julep glass. Which is what we’re trying to predict here.

But it’s not an easy proposition.

The pick we’ll make is Exaggerator, but he’s more of a hope than a pick. I’m going to bet him, so I hope he wins.

Not like American Pharoah, for example. Pharoah looked phenomenal in Arkansas, coming to the Kentucky Derby. A mesmerizing workout at Churchill Downs just five days before the Derby made him a solid handicapping selection.

Exaggerator, on the other hand, is more of a guess.

I don’t separate Exaggerator much from maybe five other colts with a very good chance to win. And maybe another seven that wouldn’t really shock me if they won. Or maybe it’s time for another one of those bombs-away long-shots, like Giacomo or Mine That Bird, both of which paid $100 to win in the past 15 years. You may have heard this is a wide-open Kentucky Derby. You heard right. It is wide open.

The contenders include a strong group of winners from a handful of key Kentucky Derby preps, including Exaggerator, Nyquist, Brody’s Cause and Creator. Add two second-place finishers, My Man Sam and Mor Spirit, and our top list has worked up to six names. One more for a mystery gray horse named Lani, which is by far the best-bred horse for stamina in this Derby, and you’ve got a good seven to work with. One third of the field.

Nyquist is the race favorite, and deservedly so. He’s 7-for-7 and arrives in Louisville with a record $3.6 million in earnings stuffed in his saddle bags.

But I’m a bloodlines believer, and Nyquist is way too speed-bred for me. I don’t think he’ll get the Derby distance of 1¼ miles. One thing that could dash that notion is that all the horses, pretty much, are speed-bred, fulfilling the dreams of Kentucky horse breeders who have discarded the old stamina-blood in favor of early-maturing, speed types who win right out of the box at age 2. If that’s all that goes in the Derby gate, one of them will win.

But we don’t think this is the year.

Exaggerator has been one of the better colts of this crop all along, going back to his 2-year-old season. In California, Nyquist turned back Exaggerator’s challenge in the San Vicente. But that’s just a seven-furlong race. Nyquist flew off to Florida for the Florida Derby, where he met the darling of the Eastern press, Mohaymen, in Mohaymen’s own house — and sent that one to the showers.

Exaggerator stayed in California for the Santa Anita Derby. You probably know the song about it “never rains in California.” But this day it did. Jockey Kent Desormeaux dropped Exaggerator so far back he was out of the picture on TV — then turned him loose. Exaggerator, who hails from the Kentucky Derby-dominant Raise a Native sire line, came flying. He was going so fast on the turn for home his feet almost slid out from under him. But the horse and rider never missed a beat, like a race car driver pushing the pedal to the metal coming out of a turn.

In that same race, after Exaggerator flew by, jockey Gary Stevens seemed to just cruise Mor Spirit home for an easy second — saving something for Louisville. Stevens has won the Kentucky Derby three times. As has Desormeaux. And Victor Espinosa, who will ride Whitmore.

And so you think it might be a jockey’s race?

So do I. The complication is there are so many top jockeys. For one thing, you can’t count on a speed duel up front. I think there’s plenty of speed in the race. Plenty of fast horses. The trouble is the guys riding the fast horses, principally Javier Castellano, Johnny Velazquez and Stevens, are too smart to get suckered into a speed duel. I imagine those guys will be very content to help each other throttle down the pace.

If I have this thought out correctly, sitting midfield behind that bunch will be Desormeaux on Exaggerator — a horse that has been trained to finish races.

Meanwhile, this scribe has a personal record on the line, having picked four Derby winners in a row in this space in LEO Weekly: I’ll Have Another, Orb, California Chrome and American Pharoah.

And it is a thing: If one were setting out to pick five Kentucky Derbies in a row, the statistical odds of that — with an average field size of just over 19 horses —  is about 3 million to 1. Of course, after you’ve picked four-in-a-row, the odds of adding one more to that is just 19-1.

So we’ll give it a whirl.