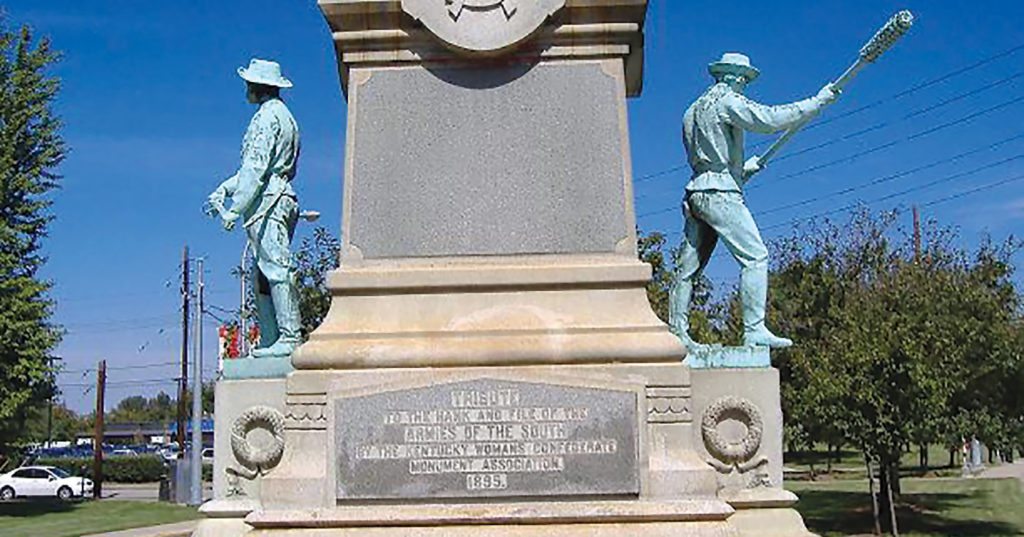 The following is an excerpt from a 1997 document written to support the inclusion of Kentucky’s Civil War monuments on the National Register of Historic Places.

“Go wearing the gray of grief!
Go watch o’er the dead in gray!
Go ·guard the private and guard the chief!
And sentinel their clay.”
—“Sentinel Songs” by Abram Ryan.

To write about the erection of Civil War monuments in Kentucky requires an explanation of how a state that remained loyal to the Union erected so few monuments to memory of the Union soldiers who fought in the war. Of the 62 monuments in this nomination, only seven (just over 10 percent) of them were erected to honor the Union soldiers. This ratio does not parallel with the proportion of the troops who fought on either side in the war, nor the allegiance of the Commonwealth. Kentucky never left the Union. It did however, supply troops to both sides, and was represented in the Confederate government.

Kentucky’s inclusion in the Confederate government is more of an extra-legal arrangement than anything else, as the official state government did not sanction the action. Nonetheless, in November of 1861, 115 representatives from 68 counties gathered in Russellville, passed an ordinance of secession and applied for admission into the Confederate States of America. In fact an election was held to fill the seats of 12 representatives in districts designated by the government of Confederate Kentucky. The vote for these representatives was taken on an “at large” basis in the areas of Kentucky that was under the control of the Confederate army in fall/winter of 1861/62. In December Kentucky became a “Confederate state” with its capitol at Bowling Green. However, none of this action was recognized by Governor Beriah Magoffin nor anyone else in Frankfort. Kentucky’s contribution of manpower to the Civil War was overwhelmingly Union. The Commonwealth provided 90,000 Union troops and only 30,000-35,000 Confederate troops, a ratio of nearly three to one Union. What then accounts for disproportionate representation of Confederate monuments?

Following the Confederate attack on Fort Sumter in Charleston Harbor, in April of 1861, Abraham Lincoln called for the states to provide 75,000 troops to suppress the rebellion. However, Kentucky Governor Beriah Magoffin emphatically refused to furnish troops “… for the wicked purpose of subduing her sister Southern States.” One month later the Commonwealth declared itself neutral and rejected any notion of participation in the Civil War. While Magoffin personally favored secession, the majority of Kentuckians were opposed to secession, but equally opposed to keeping the Union together by force of arms.

This pro-Union and anti-force sentiment was shown prior to the secession of the lower south states by Kentuckians’ votes in the presidential election of 1860. The extreme States Rights alternate, Democratic candidate John C. Breckinridge, a Kentuckian, received 53,143 votes while the Constitutional Union candidate John Bell received 66,051, regular Democratic candidate Stephen Douglas received 25, 638 and Abraham Lincoln took 1,364 votes. Roughly 2 to 1 against the extreme Southern position.

Neutrality was then the compromise Kentucky reached to avoid becoming involved in the armed conflict. This neutrality was broken in early September, 1861, when Confederate forces seized NPS Columbus, followed quickly by Union forces occupying Paducah and Smithland. The state government at that point made the decision to remain loyal to the Union. 4

A majority of Kentuckians fought for the defense of the national Union; and while not always in agreement with the Lincoln administration, sought to accommodate its efforts. During the war, the political forces in the state were divided roughly into three camps, the majority Union Democrats conservatives who wanted to preserve the Union, Regular Democrats, basically Southern sympathizers, but not necessarily secessionists; and a pro-northern group, mostly emancipationists, who generally supported the National Republican agenda. The latter group exercised a great deal of power, despite their minority status, because of their close ties to President Lincoln.

As the war dragged on, priorities on the part of the United States government changed. Abraham Lincoln who, in his inaugural address in March, 1861, promised non-interference with slavery in the states where it existed, as well as pledging to enforce the fugitive slave provision of the Constitution, issued the Emancipation Proclamation in September of 1862. Loyal Kentuckians felt betrayed by what they felt were promises broken In short, many Kentuckians fully believed that if they remained loyal to the Union that they would be allowed to keep the institution of slavery intact within the borders of the state. So once the Lincoln administration changed its tack, or was perceived to have shifted in favor of the “Radical Republicans,” by waging war on slavery, Kentuckians felt they had been betrayed. The slave holders in Kentucky understood that if slavery was destroyed in the Southern states, there was no way that they could hope to maintain the institution in Kentucky.

From the issuance of the Emancipation Proclamation in September of 1862, until the end of the war, Kentucky became more and more politically at odds with the Federal Government. There was even some fear in early 1863 that Kentucky might pull its troops out of the Union army and secede. This, of course, never happened, but some Kentucky officers resigned their commissions in the Union Army rather than fight to free the slaves.

The war ended for all practical purposes in May of 1865, yet, Federal troops remained in Kentucky until 1869. The Union army continued to recruit slaves for seven months after the termination of hostilities in 1865 to free them and their families. The Kentucky Legislature refused to ratify the 13th Amendment to the Constitution, consequently, slavery was not abolished in Kentucky until this amendment became national law in December 1865. The 13th and the following constitutional amendments that dealt with the rights of the Freedmen were extremely unpopular in Kentucky, and they were not immediately ratified by the state legislature (in fact the 13th Amendment was not ratified until 1976).

The building of Civil War monuments in the South had two distinct periods: the memorialization of the “Lost Cause” and the celebration of the Confederacy. Gaines Foster identifies three phases: Phase one of the “ceremonial bereavement” period which lasts from approximately 1865-1885; Phase two the “celebration of the Confederacy” which is from 1883-1907 and Phase three the “waning power of the Confederate tradition” from 1898 to 1913. Kentucky, however, does not fit well into the model outlined by Foster. For purposes of this study the monumentization process has simply been divided into the 19th and 20th centuries.

The first part, the time of “ceremonial bereavement” as Gaines M. Foster puts it, was a period of mourning, a time for remembrance for the sacrifices made on the battlefield by the soldiers, especially those who died. The efforts to create these memorials were often spearheaded by women, though men played important roles as well. Out of this movement grew Confederate Memorial Day a day that was a legal holiday in most Southern states, June 3 in Kentucky.

In the latter stages of the 19th century as the Civil War veterans organizations were gathering steam and the “Lost Cause” became the driving force behind the United Confederate Veterans and the United Daughters of the Confederacy. The “Lost Cause” referred to the Confederacy and the principles for which the soldiers fought. It conveyed a longing for the loss of the Old South, with its sense of honor, and its way of life. This celebration did not include an embracing of slavery, but states’ rights and constitutional rights as defined by Jefferson Davis and others in the Post-War period. The “Lost Cause” was a movement created and perpetuated by upper- and middle-class whites. Margaret Cary Green Davis, Historian of the Confederated Southern Memorial Association described the cause and the reasons to perpetuate it as follows:

“In the great struggle for a noble and just Cause, for which the men of the South sacrificed their all, the women with a faith and confidence, sublime almost in its intensity, cheered and encouraged Fathers, Sons and Husbands in their gallant defense of their rights, weaved, spun, nursed the sick, and wherever a woman’s hand could tend or soothe, there her mission. [W]hen defeat came passed through the fiery ordeal of ruined hopes; to accept with a brave and dignified resignation, a fate so adverse, its memory can never be effaced.”

From the late 19th century forward, the construction of monuments and the gathering of veterans and the UDC became less and less of a kind of ritual mourning and more of a celebration of the Confederacy. The celebration of the Confederacy and the embracing of the “Lost Cause” by the public helped ease the sense of dishonor that many of the veterans and, indeed, Southerners felt as a result of losing the war.

Over the course of time various groups erected the monuments in Kentucky. Initially ladies groups raised funds with the help of prominent male citizens. As time passed more groups became organized and took it upon themselves to raise funds to build monuments.

Following the war, the specter of death hung over the South. Many ex-Confederates considered emigration to South America, though few actually made the move. Honoring the dead of those who fought for the Southern cause was one way to keep “the cause” alive. This effort was begun by women. The first Ladies Memorial Association is said to have been formed in Winchester, Virginia, in the latter half of 1865. The women wanted to create a cemetery for the Confederate soldiers killed in the battles that had been fought nearby (there were three battles of Winchester). These womens’ organizations spread across the South. The women wanted not to celebrate the “Lost Cause,” but rather to memorialize it.

There was never really a national organization of these groups. However, in 1900 there was an attempt to unite the various ladies’ associations. This organization, “The Confederated Southern Memorial Association,” was formed in Louisville Of the 62 ladies memorial organizations listed as being enrolled in the larger association, only one was from Kentucky, the earlier ones having disappeared  as their tasks were complete.