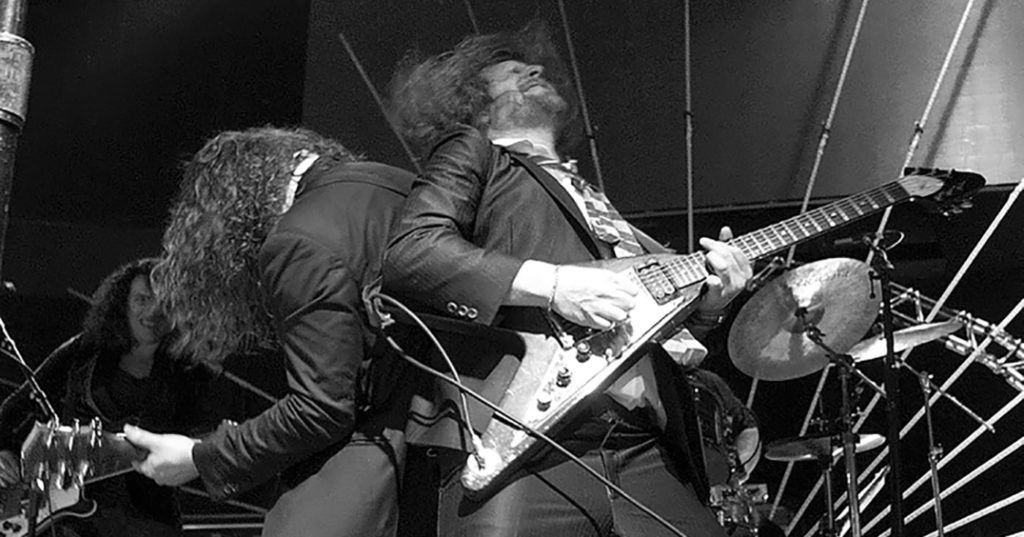 Jim James, of My Morning Jacket, and Kevin Ratterman, of La La Land Recording Studio and Twin Limb, have been collaborating on projects for over a decade, including the last two My Morning Jacket LPs, and on albums from Daniel Martin Moore, Ray Lamontagne and others. Just recently, the two have worked on the new Basia Bulat record Good Advice. On May 12 and 13, My Morning Jacket and Twin Limb will play two sold-out shows at Iroquois Amphitheater.

LEO: The sold-out, two-night stand of My Morning Jacket and Twin Limb at Iroquois Amphitheater is just the latest in over a decade of collaborations together, most recently on My Morning Jacket’s The Waterfall and Basia Bulat’s 2015 LP. When did you first begin to work together?

Kevin Ratterman: The very first time Jim and I worked together would have been recording background vocals for one of Louisville greatest bands, The Blue Goat War, back in say 2001 or 2002. But, the very first time we were able to really dig into a project and share the first of many laughs together was working on the Squalls Puppeteers pieces Jim was working up in 2005. We didn’t even really know one another that well at that point, but immediately it felt like we had made a billion records together.

LEO: Just recently your work together included production (Jim) and engineering (Kevin) on Basia Bulat’s Good Advice: What other projects have you two collaborated on that you are particularly proud of?

KR: I’m proud of all my children! But definitely had some epic times doing the last two My Morning Jacket records along with Ravenna Cult, Daniel Martin Moore, Basia Bulat, the newest Ray Lamontagne album and, most recently, the remix of one of my favorite Louisville records It Still Moves by MMJ, which I had the complete humble honor of remixing for re-release this year. Not often do you get to remix one of your favorite records that you’ve heard a million times, and mix it the way you hear it in your head. Such an honor and so much fun.

LEO: Kevin, way back over a decade ago when you had the Nonlinear Studio at the 953 Warehouse on Clay Street, did you think that you would, all these years later, still be in the music world, and still working together?

KR: Getting to do projects together and become friends has been one of the most enlightening and treasured relationships in my life. I’ve learned so much from Jim as a human and as an artist — how to put your trust in the music and to check your ego and your judgment at the door. Jim has always been amazing at making the musical experience fun … to be as serious as one human can get without taking yourself too seriously … at making the experience safe for everyone’s ideas, to propel people and encourage them instead of being controlling. To let the music be boss and to capitalize on the chance of magic — the best part of the recording experience. I wouldn’t trade those times with him for all the money or success in the world. I’ll never let it be lost on me when you can have insane amounts of fun while working as hard as you can doing what you love more than anything. Working with Jim is always that way. It’s so special, and I’m forever grateful to the gods for it.

LEO: Back then, while living at 953 Clay St., I told my father that if I hadn’t made it in the music world by 30, I would hang it up and get a respectable office job. I’m still not sure what qualifies as making it, but here we all are, racing towards 40, all, in our own ways, still in the music scene. Personally, I think had I moved anywhere else, I would have not been afforded the opportunities to work in music. Do you attribute the city of Louisville as playing a part in your musical careers and if so in what ways?

Jim James: I think making it just means having fun and loving what you do and what you create — and just enjoying the process because it makes life better. Louisville is a wonderful place to live and make art because it gives us a unique perspective on the world. Southerners always think we are [the] North, and Northerners always think we are [the] South. We are not East nor West. We are not New York City/Chicago/LA, and we are also not a super small town. We are right in the middle with lots of brilliant people doing beautiful things in music/food/art, so I believe we can see the world from a unique vantage point because we are always thought of as we are not — so we can really be anything we want to be. Also, there is just something beyond words spiritually special in the ground — magnetic ghosts of the past, present and future that seep into our dreams.

LEO: One thing I have noticed with the Louisville Is For Lovers series, is that there is loyal audience scattered across the planet that is interested specifically in, and wants to support, Louisville music. What do you think is unique about our city and its music scene that fosters a following around the world?

KR: It’s the vacuum effect, and the encouragement that the Louisville scene instills in listening to your own inner individual self, that thing that makes you unique and special, and encouraging people to capitalize on what makes them special and not how to fit inside a prepackaged mold. I hope it stays that way ‘til the end of time.

LEO: Where do you see the next 15-plus years of your careers, both individually and together, heading?

JJ: Hopefully there will be lots of love and new music and new friendships, and we will always be trying to spread the message of peace and love and universal acceptance through the healing power of music and the belief that we are all the same, and we are all in this together, so we need to support each other and cheer each other on. I have learned so much about that from working with Kevin. He makes everything he is involved in so special and so much fun. He has a beautiful and uniquely twisted vision of art and magic, as well as supremely good taste that is uniquely Kevin. There is only one Kevin, and he gives this city so much magic and love, and I am honored to work with him and call him a friend. Once you have known Kevin, you have had a taste of the divine, and you can never turn back.