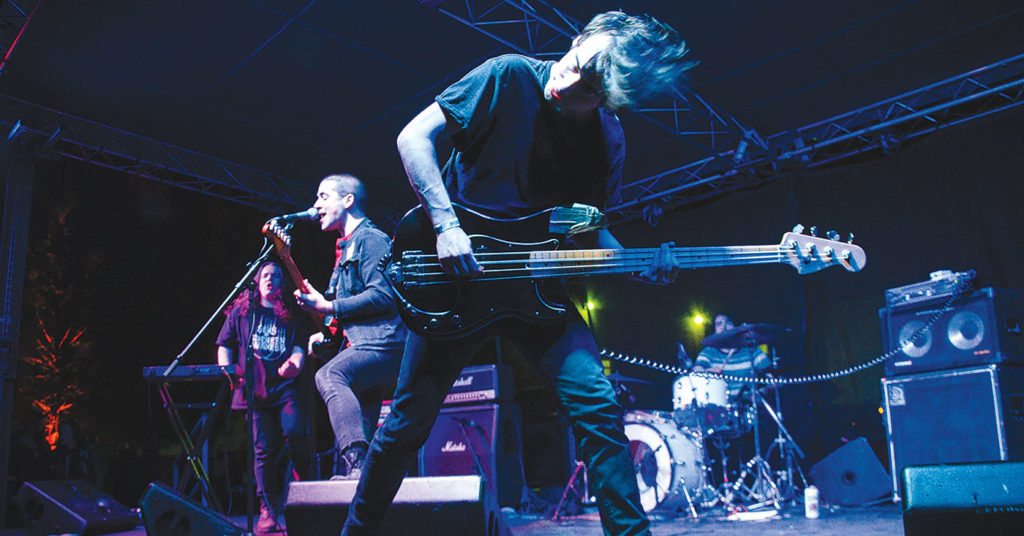 “I think we’re trying a little harder,” Tony Esposito, singer/guitarist of White Reaper, told me back in February during the first of three weeks of sessions for a forthcoming record at La La Land Studios. “On the last record, I think, a lot of time, on guitar and bass, we’re doing the same thing. But, on this one, that’s rare — everybody kind of has there own thing going on. There’s a lot more to hear. There’s a lot more to listen to.”

A half hour before, they were playing back an instrumental base of a song that was still waiting for lyrics. It was slower and more airy and precise than their previous material — less fuzz-punk, instead dipping further into the well of the titans of classic rock. Being the first time they planned to write the majority of an album in the studio — including the lyrics — and since they had a much longer period of time allotted, the consensus was all the tracks would be done with time to spare, but that’s not how it worked out.

“Originally, we scheduled 20 days in the studio, and we thought that we would get tracking and mixing done in 20 days,” drummer Nick Wilkerson said, as the band was hanging out on the back porch of La La Land on the first Sunday in May after a recently finished second set of sessions, while producer Kevin Ratterman was inside mixing the final product. “We were planning on writing all of the songs in the studio. We hit our 20 days and we had to reschedule — Kevin was going on tour, and we had to tour.”

“We got the instruments done, then we were like, ‘Oh, shit, we have to write lyrics for 11 songs in three days,’ and that was just impossible,” keys player Ryan Hater added. “It ended up being nice to take time off, because we got to sit with it and think about it.”

And, since there wasn’t a looming time crunch to get the new record out, they let the material breathe for a few months, and revisited it. Not much changed, but it was enough to make them feel like it ended up being a good thing.

“It was mostly tones and sounds,” bassist Sam Wilkerson said. “Tony reworked some of the guitar, [and] wrote lyrics in the time that we took off. We weren’t planning on taking a bunch of time off, but it was serendipitous, because it allowed us to get some stuff done.”

The first song on the forthcoming album — which has yet to have a release date — is the longest one they’ve ever recorded, clocking in at 4:52. Opening with booming, distorted and spaced-out guitar and rhythmic, arena-rock drumming, the song feels like it was co-written with the ghost of Phil Lynott, but, while the pace has slowed substantially, those interwoven, inescapable elements that seem embedded in a band’s DNA that give them character are still present. They move in a different direction — the furthest they’ve been away from where they started — without burning down everything they’ve built.

“The way I see it is there’s more room to hear things with the new stuff,” Nick Wilkerson said. “The parts are separated. You can isolate certain things that are happening in the song. It’s going to be abrasive, and it’s going to be intricate at the same time. If you want to zone out to one part, you can do that. If you want to zone out to another, you can do that.”

When they talk about this album, every conversation seems to veer toward the pace, and how that’s allowed some space for them to grow individually, and that’s easily the most noticeable thing about the new music. Where “White Reaper Does It Again” — their debut full-length that was released last summer — made everything bolder and thicker, this seems more confident, ambitious and adventurous in its approach: It’s less about being a ball of energy, and more about expanding what they can do, while maintaining the signature intensity that’s always been present in their live shows, and is starting to seep into the studio material more and more.

“It’s more of a Bruce Springsteen style of rock ‘n’ roll, as opposed to a fast style,” Hater said. “We toured for a year, came back and wrote a record, and that’s what it sounds like.”

“The more you tour, the more inspired you can be,” Sam Wilkerson added. “Not only with seeing multiple bands every night, but also traveling, even to places that we’ve already been. Every time you go to a city, you’ll go to a new place where you never have been. Maybe you go a different route on a tour, you drive a different highway. The more you explore in the world, the more that you can be inspired by that.”

Surrounding this album, there seems to be a hyper-awareness about not duplicating past ideas, or falling into the same patterns. They’ve worked to kill their darlings, and they’ve definitely opened some doors for their sound, because, even though it’s conceptually a big rock record, it’s also the thing that they’ve done that’s the hardest to pigeonhole.

“I definitely think with this record coming out, that there will be some adjectives that people used to describe us before that they are probably going to ditch now,” Hater said.

“Yeah, with this one, you can’t put the same headline, ‘White Reaper and their hooks … with they’re blazing fast-paced garage rock,’” Nick Wilkerson added. “I don’t really care about the description, all I’m saying is that you can’t possibly say the same thing about this album.”