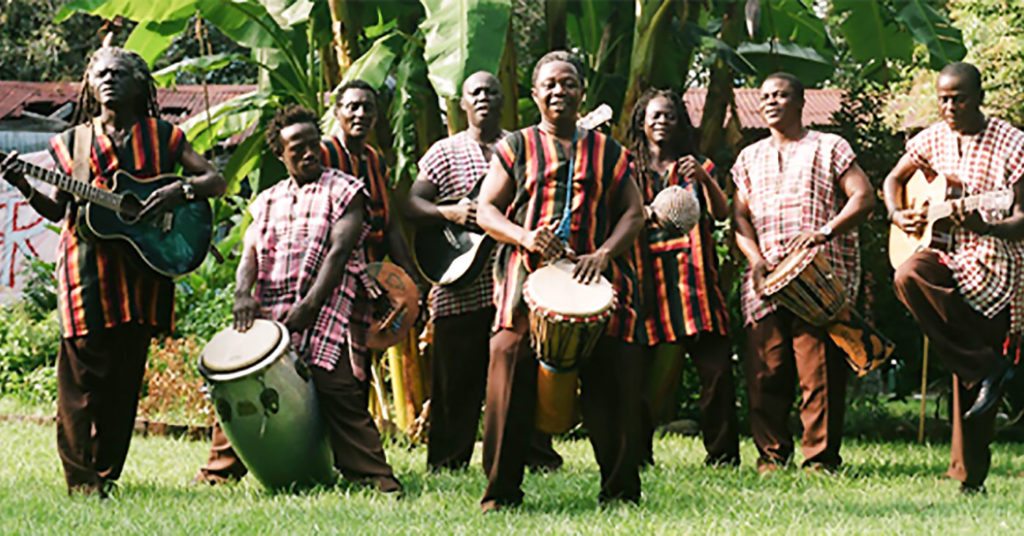 The music was passed around refugee camps during the country’s brutal civil war from 1991 to 2002. Today, it has reached international stages. And this Sunday, May 22, the All-Stars will bring their uplifting spiritual jams to Louisville’s Haymarket Whiskey Bar.

When they traveled to camps across the neighboring country of Guinea, “There was a lot of insecurity,” said bandleader Reuben Koroma. “But, because we love the music, we have no fear. We know that we are not bad people. We are entertainers. And we are just coming to make people happy.”

Their dedication transpired a peace revolution. Before being forced into refuge, Koroma played drums in his band, The Emperors, where he eventually found his voice on lead vocals. “I have revolutionary songs; I sing against [the rebels] for their brutality,” he said.

The group continues performing the message of their peace revolution with a blend of their most recent material (2014’s Libation) and previous albums’ West African and roots reggae styles. The albums tell a story of this musical journey: from Sierra Leone to New Orleans halfway into recording their second album, Rise & Shine; to Brooklyn, New York, for the Afrobeat-injected Radio Salone, and circling back home to produce Libation in honor of their 10 years together and the loved ones lost.

The six-month U.S. tour in 2014 that followed, however, turned into an extended stay. “After we completed the tour, there was this news about Ebola killing our people,” he said. “We are threatened to go back home. And since then we have not been there.”

“Living Like a Refugee,” one of their earliest songs, is in heavy rotation.