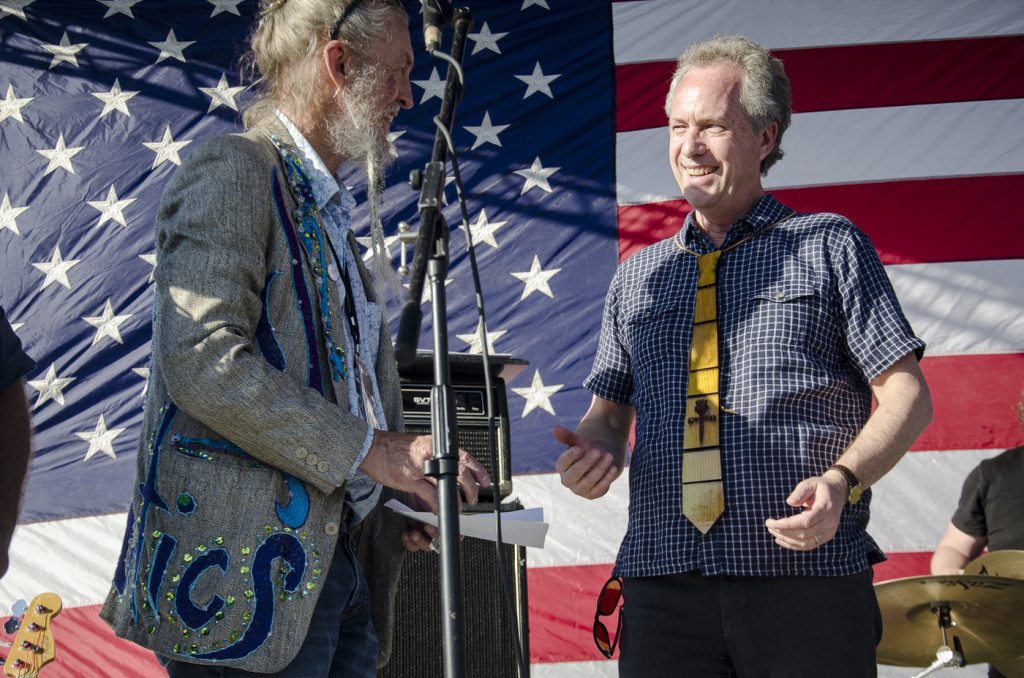 Michael: Like Edward Murrow and Lester Bangs, Hunter S.Thompson represented a tidal shift in how to present narrative in print. In its sixth year, GonzoFest is doing good work honoring a controversial figure for the city. In his afternoon address before welcoming keynote speakers Frank Messina and Hunter’s son, Juan Thompson, Ron Whitehead lamented that the city that shaped Hunter throughout his formative years had no formal hometown recognition until the end of his life. Perhaps because he threw shade at the Derby? For a transplant to Louisville less than seven years ago, that’s such a foreign thought to me. And yet, it wasn’t until this decade that a weekend event and a mural adorned in the iconic Ralph Steadman style guide made their mark on the city Hunter called home in the first act of his life.

Offering more prose than poetry, Juan Thompson spoke of his father in honest and illuminating terms — a mix of both admiration and frustration. He was the one who found his father’s body in 2005 the day Hunter decided getting old was no fun anymore. And it’s he who found his own rebellion by growing up as an anti-Hunter — more subdued and more adjusted. It’s his groundedness that allowed for the reliable narrator his father never could (or should) have been with “Stories I Tell Myself,” his memoir of his father of which he shared an excerpt with the crowd. It was a poignant moment of clarity amongst the weirdness at the Big Four lawn at Waterfront Park.

And lest anyone get it twisted, Gonzofest is a weird mama jama — and one that’s always suffered from a bit of an identity crisis, for better or worse. Hunter cosplayers abounded, including at least one caricature artist painting, obviously, with Steadman strokes. Families intermingled with clowns, walking henna canvases and extremely woke atheists in catchphrase t-shirts acquired from their local Target. Everyone wanted to give you a koozie. I have four, including one from Louisville’s alternative source for news, arts, and culture since 1990 (that’s the publication you’re reading right now, you corncobs). Mayor Greg Fischer received a bolo tie made from some reclaimed wood I didn’t catch the name of for being hella Gonzo. A drone copter hovered above the festival-goers near the stage. And to no one’s surprise, Gonzoville feels the Bern, as canvassers signed up the vote and a giant foam-board cutout of the beloved Vermont senator — who’s capturing the hearts of the age demographic that launched a thousand think-pieces — roved about the crowd.

Scott: A notable result of this year’s GonzoFest were the moments that really humanized Hunter. His image — the clothes from “Fear and Loathing”, the cigarette holder, the drugs, the guns, the bombs — are so burned into popular culture that we run the risk of immortalizing a caricature instead of celebrating a human, and, most importantly, the writing. A huge part of that was obviously Hunter’s family being in town this year, and his son Juan — a person who has a very direct and clear-eyed view of Hunter — giving the keynote. Hearing Juan speak was a sincere and important moment at the event, really centering the day and further validating the event as being a world-class way to honor a sharp and groundbreaking journalist. During Juan’s keynote, I heard someone murmur, “He seems like the polar opposite of Hunter,” with a hint of disappointment in his voice, as if he were expecting some half-mad, rambling and charismatic wild man to show up, and was surprised by the subtle, soft-spoken, clear-minded son that delivered an excerpt from his new book, “Stories I Tell Myself: Growing Up With Hunter S. Thompson.” But, hearing impassioned truth was better than a wacky sideshow spectacle, and while Juan might not be anything like his father, I couldn’t think of a better person or way to honor him.

On the music side of things, the lineup was packed with talent, with Frederick The Younger and Quiet Hollers kicking things off and Wax Fang and Chrome Pony both turning in memorable sets. My favorite of the day though came from Dr. Dundiff, Touch A.C. and The Smokeshop Kids, who put together another incredible live band hip-hop set, bring out 1200, Otis Junior and others. It was as intense as their Forecastle set a year ago, although this time the stage wasn’t pinned under a highway, so the sound wasn’t as muddled.

Ethan: We truly live in a Gonzo world when children can attend a Hunter S. Thompson-inspired festival, and circus performers can entertain those children by hammering nails into their nostrils or by suspending two bowling balls by large holes in their earlobes. Who knows what Hunter S. Thompson would’ve thought about children attending his festival, but one can be pretty sure he would’ve enjoyed the absurdity of it all.

For me, Chrome Pony was the band that left me with the biggest smile. Despite being one of the earlier acts, and therefore playing to one of the smaller crowds, the show still had plenty of energy. I closed my eyes and let the sun melt my frost-encrusted winter skin as their music transported me to a California beach where life was full of careless, youthful fun. And even after I opened my eyes to find the Ohio River in front of me, still pumping sludge into the Gulf, I couldn’t help but smile about the little vacation they just took me on.

At one point, someone busted out a pack of chalk and began using the pillars of the Big Four Bridge as a canvas/message board. It was filled with plenty of random doodles, graffiti inspired tags, crudely drawn penises and misquoted lines from Hunter S. Thompson’s books. I couldn’t help but laugh at the idea of Thompson seeing these imperfect incarnations of his work and scaling the pillars, chalk in hand, to rectify these injustices.

Michael: That crowd seemed to be a bit thinner this year too, for whatever reason. Chalk it up to fierce of competition of multiple festivals throughout the city on the first real weekend of spring, or perhaps the weekend of Tax Day has folks feelin’ the pinch. Regardless of reason, Gonzofest grew up this year, with stronger stage production, better sound and lights, and more company logos. Not that the latter point is a bad thing — a strong sponsorship from local craft beer purveyors Falls City offered a welcome reprieve from last year’s grossly understaffed bar situation. Hunter wouldn’t have wanted to wait 20 minutes for a beer, and nor did Gonzofest-goers. That problem was addressed. This year’s festival also grabbed talent outside of Louisville to peppered the music lineup, including Burger Records’ heartland punk blowtorch Natural Child and fellow Nashvillians Fly Golden Eagle. Though billed higher, hometown treasure Wax Fang played to the biggest crowd.

In terms of guarantees, both death and taxes have been discussed in this here recap. Here’s the third one — Wax Fang will always deliver a bombastic, visceral, artistically muscular set that borrows from both the arena rock greats and DIY basement show weirdos. Throughout their hourlong set, I kept staring at a young dude about 20 feet in front me who slide his torso into a Mumford & Sons tour tee at some point that day, and I couldn’t keep from feeling mad that Wax Fang are not at least as big, or maybe bigger, than that collection of culture-aping bozos. Hunter would’ve called shenanigans on that, too.