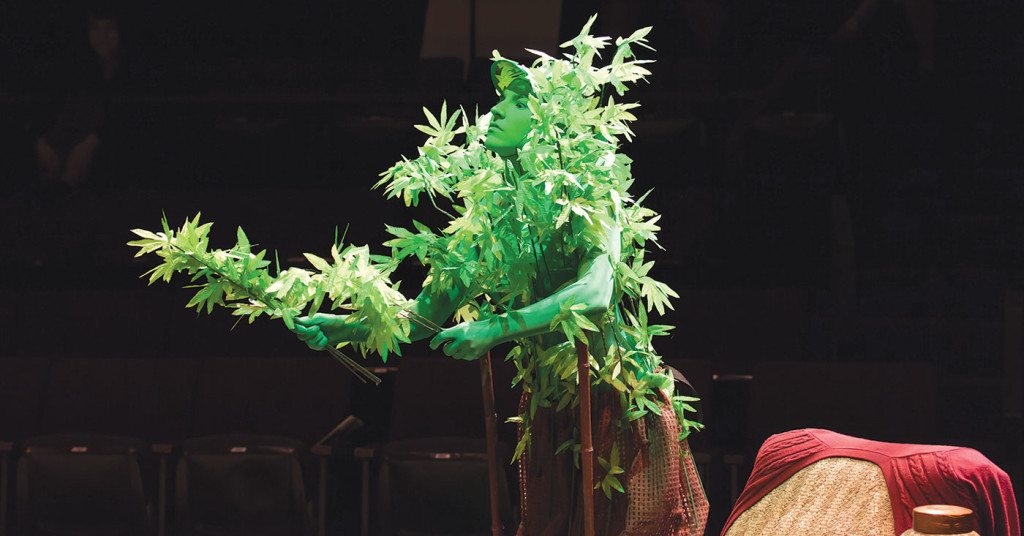 It came at the end of a long season, but this year’s 11th-Annual New Voices Young Playwrights Festival at Actors Theatre of Louisville, which had a two-day run earlier this week, was no afterthought. The plays — eight of them, all penned by regional middle school and high school students — overflowed with ideas, ideals, imagination and inspiration. These young thinkers, writers and storytellers represent the voice of a new generation. And they represent it with humor, compassion and a wry optimism that offers plenty of hope not just for the future of theater, but for the future of our world.
More than 800 plays were submitted for this year’s Festival, which suggests that young people in Kentucky and Southern Indiana — and everywhere else, for that matter — are animated by artistic impulses that are too often marginalized by a political environment that is casually dismissive of the power of the arts and humanities.
So kudos to the Festival sponsors: LG&E/KU, the Kentucky Center, The Robert W. Rounsavall Jr. Family Foundation, the Fund for the Arts, and The Roy Cockrum Foundation (a major supporter of the ATL Apprentice/Intern Company), for supporting the Festival. Even the hundreds of playwrights whose work didn’t make the final program benefited from the invitation to try. And congratulations to the producers, Jane B. Jones and John Rooney, and their technical and artistic team, including Karl Anderson (sets), Cheyenne Davis (lights) and Rachel Spear (sound design), for putting on a first-rate show with great performance values. This production was a delight in every sense.
So, eight plays. They ran the gamut from quirky romantic challenges to devilish debates, from deeply literate space-age riffs on “Alice in Wonderland” to absurdist battles over Pop-Tarts. The characters who populated the stage included an earnest retired policeman, a quivering cannabis plant in the most brilliant costume I’ve seen in years (costume design credits go to Maggie McGrann and Adrienne Nixon), an inspirational huckster with a very weird mantra and a mother whose quietly profound love for her transgender child delivered the most moving moments of the night.
In “Zero to One Hundred (Real Quick)” (by Drew Etheridge, Jeffersonville High School, directed by Lexy Leuszler, dramaturgy by Helena D. Pennington), a smitten young man is trying to get up the nerve to ask a classmate to a school dance. Alas, he’s as shy as he is smitten — until a buddy outfits him with magic bling that transforms him into a strutting superstar (who even manages to overcome the obstacles set in his path by an imperious high school administrator). All of his efforts come to a gently funny resolution when it turns out that his love interest has other interests of her own (performers: Alejandro Hernandez, Addison Williams, Amelia Windom, Mbali Guliwe).
“The Problem” (by Joel Pizano, Fern Creek High School, director, Jes Childress, dramaturgy, Talleri McRae) offers another romantic conundrum. Retired cop John (Mbali Guliwe) is ready to pop the question to Sara (Park Williams), when he discovers that she uses her green thumb to maintain an enormous cannabis plant in memory of her late husband. The plant (played in green quivering splendor by Walls Trimble) is too much for the cop to bear — but can Sara bring herself to prune it from her life? The closing moments of this wonderful piece of theater are surprisingly poignant.
“Opus: An Exploration of Meta-Narratives through Freudian Analysis” (by Gilman Bagga, St. Francis High School, director, Jane B. Jones, dramaturgy, Keith McGill) is a trip through the troubled mind of a huckster (in a bracing performance by Jayson Speters) whose inspirational mantra is “Shut Yo Butt” — a mysterious path to happiness, indeed, but wonderfully worked out in the script (other performers: Addison Williams, Ari Shapiro, Adenike Thomas, Kyle Whalen).
“The LIE Mission” (by Maria Cora, Floyd Central High School, director, Jonathan Harper Schlieman, dramaturgy, Kate Cuellar) takes place on an ironically futuristic set that serves as control center for what seems like an interplanetary trip (are vintage computers the digital steampunk memes of the future?). Anyway, Dr. Alicia Liddell (Tracey Green) is out there somewhere, and things have gone dreadfully wrong, while Dr. Lewis Dodgson (Esau Mora) and Chester Kaht (or is that Cheshire Cat?, played by Austin Blunk) struggle to get her home. Cora goes deeply into the rabbit hole in this exquisitely complex riff on “Alice in Wonderland.”
“The Devil in Little Debbie” (by Zoe Peterson, Ballard High School, Walden Theatre, director, Nick O’Leary, dramaturgy, Janelle Baker) is a fine, funny updated play on a Faustian theme — with a laugh-out-loud modern twist (performers, Ari Shapiro, Walls Trimble). Instead of Little Debbies, the folks in “The Big Daddy Pop-Tart Booster” (by Jacob Hack, Kentucky School for the Blind, director, Betsy Anne Huggins, dramaturgy, Kyle Whalen) are battling over what must be the best Pop-Tart popping device ever known. Zany, absurd, with a fine baseball-bat battle (fight choreography, Brendan Westerfield) it featured Lisa Bol, Michael T. Brown, Sara Turner, Austin Blunk and a much maligned dog played by Yaron Lotan.
“Misunderstandings” (by Michaela French, director, Jenn Oswald, dramaturgy, Michael Whatley) offers a classic scenario about two innocents who receive romantic advice from their more sophisticated friends. The idea is familiar, but the details here were deliciously wrought and performed by Amelia Windom, Hannah Karpenko, Yaron Lotan, and Alejandro Hernandez.
“Image of Beauty” (by Kay Nilest, Assumption High School, director, James Kennedy, dramaturgy, Sara Durham) is about a transgender teen, Taylor (Michael Fell) who wants — and fears — to attend a high school dance. Clothing and cosmetics serve as storytelling devices for a deeply considered, inspirational, an moving look at parent-child relationships in an emotionally fraught situation. And thanks to a superbly graceful piece of acting from Glenna Brucken, as Taylor’s mother, the play never turned preachy.
For more information about Actors Theatre of Louisville, go to  actorstheatre.org. •