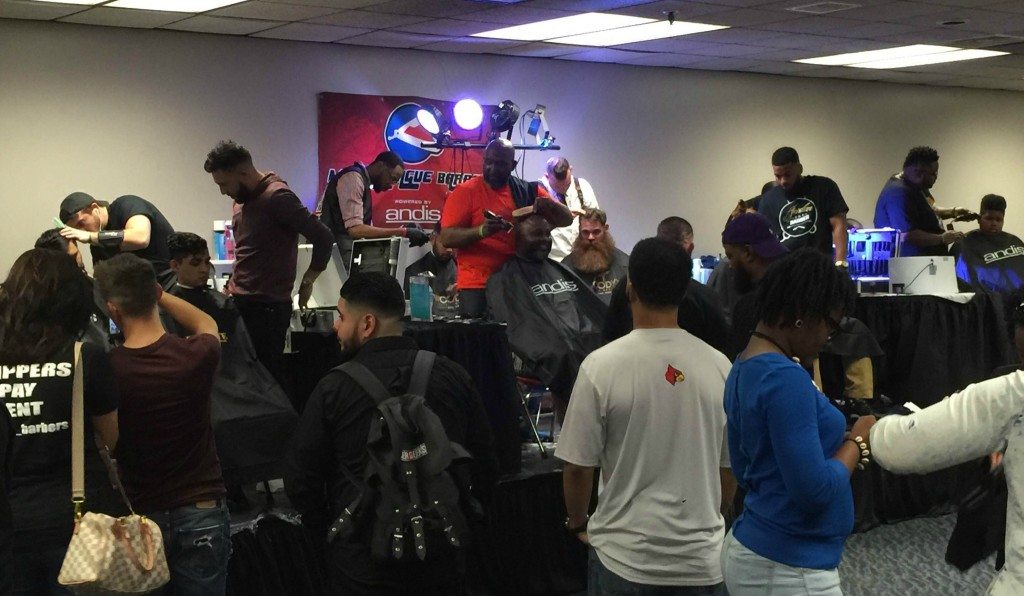 Barbering has been a part of my life for as long as I can remember. My mother, grandfather, aunt and now sister have all worked in barbershops for at least a little while, so the idea of going to a barbering expo this past weekend, especially involving a super barber, was too good of an opportunity to pass up. Mom has worked in a shop the longest, clocking in with almost 40 years of experience at this point, a figure that she may or may not want me to share (keep that between us). Watching her work is watching her hold court: The barbershop isn’t now and has possibly never been a place to handle the basic maintenance of your appearance, but a social environment where folks can meet and exchange ideas.

The Midwest Kentucky Super Barber Expo started in Chicago and looks to expand. “ This is a platform for up and coming products, vendors, to get their info out to the public and to get the continuing education that major league barbering has to offer,” said event coordinator Joe Flano.

Flano was there when I arrived yesterday afternoon, my barber sister in tow to help with perspective on the mechanics of haircutting. The devil is in the details. The event was in the basement of the Kentucky Convention Center. Around the edge of the room were various vendors hocking one hair product or another. Everyone looked like they definitely had a lot more vested interest in their appearance than I do, but that’s not saying a whole lot. Suffice it to say there were lots of twirled mustaches, thick beards, box style haircuts of the sort that would make the Boyz II Men of the 90s weep with joy, and killer fades.

There was one very well dressed and groomed man walking around with holsters on for his various barbering utensils, which included a variety of sheers, brushes, and probably a straight razor or two. This was the type of guy that meant business and his presence kind of summarized the event in a nutshell; for the folks in attendance, barbering is serious.

That doesn’t mean that it wasn’t fun though. The room was heavy with hip-hop beats, instrumental and generic music, but no less capable of helping to move a room. Flano and company grabbed some mics during the competition portion of the evening, which kicked off with what I believe was a Fastest Fade competition. Given the fact that the lines rapped in repeated succession were “Are you fast (repeated six times)? Can you fade (repeated six times)?”

By my standards, the competition seemed a little uneven, no pun intended. Of the three participants, one has almost no hair to start with, which seems like an unfair advantage. The entire round took about 15 minutes, and I’ve got to say that the event coordinators did a lot to hold everyone’s attention. There were a lot more kids there than I would have imagined for an event that involves people getting this or that haircut. The competitions didn’t offer a lot of closure though, as they were judged out of sight. Wouldn’t that be the end game for a competition like this?

Next up was the freestyle competition. This involved more people than before, and the stage was packed. There were about six people involved including the barber. The idea for this competition is that they get to run wild with their cuts and make their barber chair the easel for their art. The round ran for an hour and with mixed results, but high energy. I ran into one of the models in the restroom washing his hands. I asked him what he thought, if he liked what he got. He said, “Almost,” which changed to “Not really,” when pressed for an explanation. Turns out not everyone wants a UofL Cardinal shaved into the back of their head. It’s cool to watch people do it though.

That kind of summarizes the event as a whole, actually. They had a lot of practical work-shopping in the earliest part of the day that addressed the mechanics of barbering, as well as using technology like social media to create a buzz for your work, again pun intended. The vendors there were few but enthusiastic. In fact, everyone there seemed to be having a good time, which by every standard that I can imagine qualifies this as a success. That almost mythological position of the barbershop as a cultural way station was in full effect and it was surprisingly infectious.