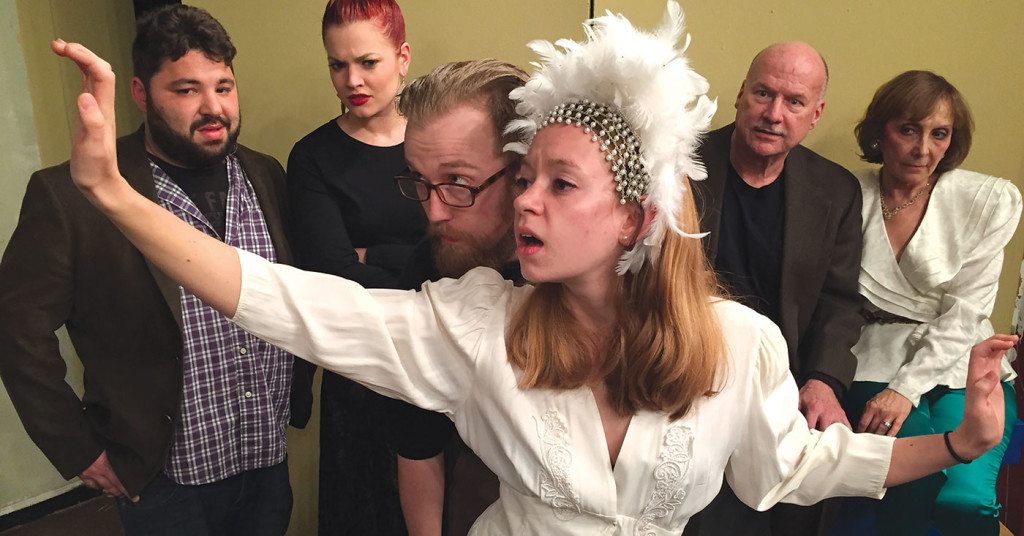 The Associated Press Stylebook is explicit on the subject of expletives: “Do not use them, unless they are part of direct quotations and there is a compelling reason for them.” Writers are also instructed not to change “damn it” to “darn it,” to place offending language in a separate paragraph so that editors can easily delete the expletives that need deleting and to follow the first letter of an expletive with an appropriate number of hyphens — perhaps on the assumption that readers won’t be as offended if they themselves conjure up the hidden letters.

Finally, if the profanity is necessary, writers should flag the story at the top.

If an Alternative Press Stylebook exists, I’ve never seen it. Maybe it would say, “F— that!” I’m not sure.

The opening words of the play now running in a f— great production at the Bard’s Town Theatre starts with this direct quotation: “The play will begin when someone says, ‘Start the fucking play.’”

On the night I attended, the packed audience immediately responded (and this is a direct quotation), “Start the fucking play.”

And so the play began. This particular play, by Aaron Posner, may be single-handedly responsible for a global shortage of what the “eliminative dashes” that AP prescribes for words like f—. The title, “Stupid F—ing Bird” is seldom spelled out in print. And in an interview, Posner (who prefers that companies replace the dashes with ##s), has mentioned that certain companies are unlikely to produce the play because of the name. On the other hand, the 2013 play is much in demand among companies and audiences that delight in its adventurous mix of literate smarts and irreverent vulgarities — which puts it right in The Bard’s Town’s wheelhouse.

The play is a f—ing loose adaptation of Anton Chekhov’s “The Seagull,” and like its Russian grandparent, it’s constructed as a meta-critique that both lampoons and pays tribute to contemporary theatrical and social conventions. Much of that critique is packed into the script itself, which frequently uses direct address to the audience (and, at one point finds an actor requesting romantic advice from the audience). But the pleasures of this production owe much to the visual savvy of Director Scot Atkinson and Assistant Director Maria Allgeier. In scene after scene, they arrange the characters in shapes and relationships that even without words manage to invoke and subvert decades of stage convention.

But turning our attention to the plot and the characters, let’s be clear — as Atkinson writes in his program note — that knowledge of “The Seagull” is not a prerequisite for enjoying “Stupid F—ing Bird.” It’s a complicated farce, but a farce nonetheless. There are seven characters, whose relationships can be summed up like this: A loves B who has a crush on C who loves D who has an affair with E who is in a relationship with F. As for G, he’s an amiable fellow who manages to keep out of this romantic hexagon.

It would be f—ing hard work for me to connect each actor to his or her point on the hexagon. And for those who haven’t  seen the play, it would be excruciatingly complicated. So I won’t. Catch the play, and you’ll figure that part out. But still, it’s conventional in theater reviews to discuss the characters and the actors who play them, so here it goes.

Con (Bryan Watson) is a tortured soul, a playwright/performance artist striving to destroy all artifice and use theater to tell the truth. He’s pretty sure that telling the truth and being successful are fundamentally incompatible, and that’s OK with him, if only because it verifies that his suffering is bona fide. Watson leavens his despair with just the right dash of narcissistic arrogance — and his indignant verbal eruptions are something to behold. Con’s mother, a famous actress named Emma (Carol Dines), doesn’t quite get her son’s attitude. Success has been very good for her — and Dines displays the trappings of success with glamor and an icy (if sometimes fragile) and unquestioning certainty that success is the most reliable indicator of quality.

Con’s newest piece of work (presented as a play-within-the-play) features an actress named Nina (played by Gracie Taylor), whose brilliantly choreographed and outrageously funny search for “truth” would be the highlight of the play — if not for all the highlights that follow (including her own well-honed romantic fling).

Supporting Con in his endeavors is a neglected sidekick, Mash (Katye Heim), who is also Con’s finest advocate. Of his work, she says, “It’s a site-specific performance event … It’s like a play, but not so stupid. Nobody’s pretending to be somebody else.” Heim’s is a dark and brooding presence — but her brooding is artful and ironic, especially when she picks up a guitar and sings a few songs penned by members of the cast and company). And supporting Mash, there is Dev — played by Raanan Hershberg, whose work as a comedian has attracted quite bit of media attention in Louisville. Here, he plays a hopelessly smitten lover with an inspiring, candid mix of grit and anguish in a performance that is a pleasure to watch. Equally fun to watch are the commanding performances from Phil Lynch as Trig, a massively successful novelist whose love for humanity is as palpable as his human weaknesses and Sean Childress as a doctor whose wistful acceptance of his life offers a quietly moving counterpoint to all those f—ing dramatic histrionics.