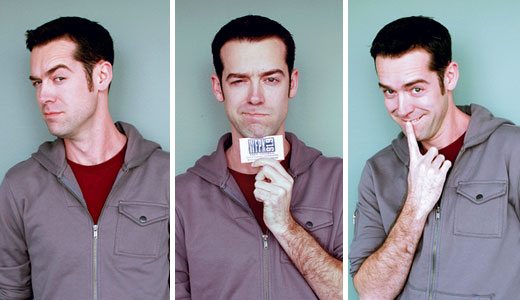 Sean Cannon, host of The Guestlist on WFPK 91.9 and my roommate for South By Southwest this year, made it a habit of making his way back to our hotel just after I fell asleep. Every single night, an open and close of the loudest door ever. Without fail, my eyes barely open except for the slight alarm from the noise, he would dive into conversation, which at any other time would be completely uncharacteristic of him.

“How long have you been here?”

“Long enough to be asleep.”

Not catching the hint, “You see anything good?”

My brain would try and come out of its haze to reassemble what had happened in the day. There was the interview with Peaches, which turned into a full on lunch with some friends of hers. Listening parties to hear records that I’d get in a lot of trouble for repeating here. Meetings with industry friends who told me stories about the darker times in so-and-so’s career. Miles of walking under blue Texas skies.

Wanting really badly to just go back to sleep after an exhausting day, I’m sure I stared for a few seconds before answering. I thought about Anderson Paak, and how he could be the biggest thing in hip-hop in the next year or two, impressive as much for his amazing drumming skills as for his lyrics and verses. I thought about Sunflower Bean and how they reminded me of “Adore”-era Smashing Pumpkins, not only with their buzz-saw guitars that infused alt-rock with psychedelia, but in how Julia Cumming wore her long, black outfit that resembled the one Corgan used in that period. Then I thought about having a really great time while watching Hinds. A whole crowd jumping around and dancing to their surf rock sound that occasionally teetered on a screaming meltdown from what would otherwise be four sweet looking faces. Or seeing Lucius stare into each other’s eyes for a half dozen songs like they were the only ones on Earth, while we watched slack jawed in amazement. Ezra Furman taking the torch from Billy Joe Armstrong’s “Nimrod” era, carrying punk’s shit-head attitude while being drenched in some of the catchiest melodies of the whole day.

And then, I thought about the question that I’d eventually have to deal with when I went home. “What was your favorite band from SxSW?” It’s a question that I’ve come to dodge. In fact, right from the beginning, I hated to get the question. I understand why I get it. I’m sent to festivals to discover and report back, but narrowing it down to the best is more of a conversation killer for me than an opener. I can tell you everything I saw and whether or not I thought the band had anything worth hearing. I can tell you if an artist was hot or hype. I can tell if it’s worth going to Sixth Street … it’s not. But the best?

I can tell you that this year was one of my favorite weeks I’ve ever spent in Austin, probably because I was only there three and-a-half days. But, I mean it: There was something about this year that made everything nice. Nice is the word, too. It’s not a word that’s usually associated with the festival. A nice SxSW would be an oxymoron if I hadn’t experienced it myself. It was probably because all of the worthwhile shows were fit nicely into little pockets of town right outside of the main madness. It was also nice to not have an overbearing amount of legendary acts with which to compete. SxSW may be meant to be the discovery festival, but when you’ve got bucket-list artists, you take them wherever you can, which can make you miss some of the up and comers you’ve heard about. Outside of Iggy Pop (a running theme lately), who was every bit as amazing as I’d hoped, I was able to float around and catch a handful from the buzz bin.

All of that flashed through my mind when I stopped staring at Sean and said, “They were fine.” Then I would get up to use the restroom, groggy but coming to. By the time I came back out, no more than a minute later, Sean would be asleep in his bed completely out cold. And I would lie there for the next couple hours, wide awake, plotting my revenge as an early riser. •