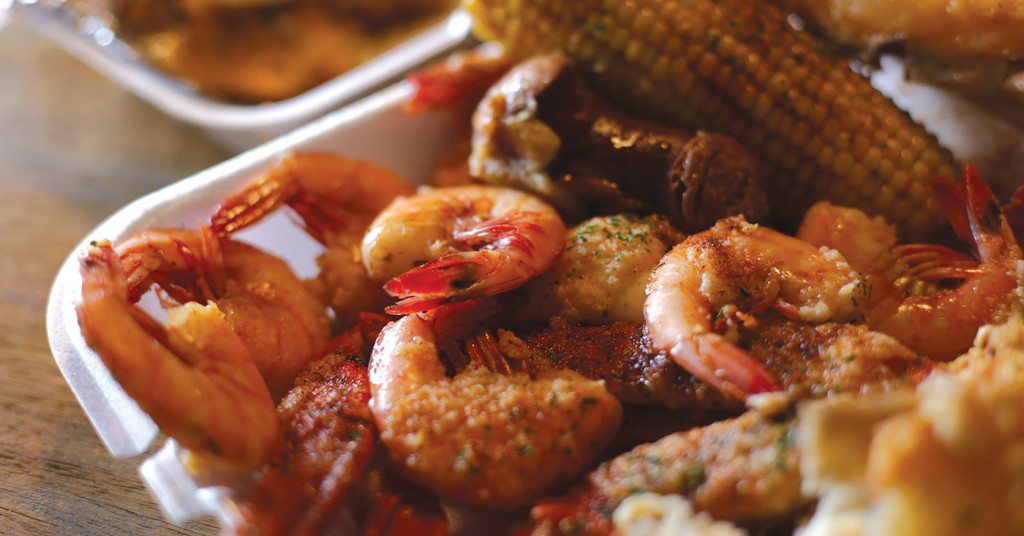 Heaps and heaps of steaming, succulent deliciousnessPhotos by Edward Neary

Mid-priced seafood restaurants are few and far between in Louisville, a sad fact not lost on Nichelle Thurston when she moved here from Florida seven years ago.

Frustrated with a dearth of good seafood dining choices, she had an epiphany: Give people like her what they wanted. Friends and family members had been paying her for her signature New Orleans-style shrimp boils for a long time, a dish she learned from her grandfather, a globe-trotting Navy cook.

“My grandfather traveled all over the world and he tasted a lot of different things, so it came from all of that,” Thurston said.

Her seafood business started simply enough last June. A post on Instagram and a vacant lot address where she’d bring coolers packed with takeout boxes stacked inside, each filled with pounds of her intoxicating fare. “I’d fill up my SUV, drive to the place, there’d be 20 or 30 people waiting on me. I’d sell out, run back home and get more, and go back. That didn’t last long, because I’d have 60 people waiting on me and only have 30 plates”

After giving up on the idea of delivering her food, she just let people come to her, running a makeshift restaurant out of her house. Her husband and business partner, Luke Thurston, would come home from work in the early afternoon and would find the entire neighborhood in his front yard waiting for their seafood dinner. All of this activity didn’t escape the notice of city officials who quickly shut down her home kitchen seafood speakeasy.

“I’m going to do what I have to do. I’m not going to stop, so we got a food truck,” Thurston recalled.

After only a few months, the couple found that they’d outgrown their food truck and leased a restaurant location in January, a building formerly housing a car tire garage at the corner of Seventh and Oak streets, and at the western anchor of a blossoming food corridor. A mere block or two away, also on Oak Street, is Baraka Restaurant, a Somali joint serving what is arguably the best African food in the city. Another 100 feet or so due east you’ll find Coco’s Cakes, a scratch bakery with cupcakes so good you’d be proud to take one to your mother on her birthday.

Now in its own restaurant, the Seafood Lady still brings in customers. “The line is usually out the door, and on weekends, there’s usually an hour and a half wait, from when you get in line and when you get your food,” she said.

I noticed this phenomenon one recent Wednesday when I stopped in for a late lunch a bit before 1 p.m. The line at the order counter was long, but it moved quickly, and the 15 minute wait I was told to expect was closer to 10.

I opted for the full boil, a $25 box of spicy, steaming deliciousness that’s built for two but could easily feed three. Nestled inside my takeout box was a generous splay of snow crab legs and a dozen large shrimp alongside two halves of a giant Idaho russet, an ear of corn, and two goodly wads of incredibly tender andouille sausage. One peeled hard boiled egg was welcome little surprise, and not something I’d expect to find in a seafood boil, but was perfect, having absorbed the chorus of savory delights of the briny, oceany broth.

One taste and you’ll know exactly why. I opted for the full boil, a $25 box of steaming, spicy and garlicky deliciousness built for at least two, maybe three hungry diners. Half a snow crab, a dozen giant shrimp, two halves of a one pound Idaho russet, a whole ear of corn, two goodly wads of tender andouille sausage, and a peeled hard boiled egg. Eating by yourself? Grab a $15 box for lunch and you’ll have dinner, too.

Other choices include a la carte fried fish fillets — tilapia, cod, or catfish, gumbo, crab cakes, lobster tails, crawfish, and the diet-busting crab fries, a kind of low country poutine of lump crab, Alfredo sauce, and french fried potatoes that my table neighbor said was “eat-it-twice-a-week” good. Lunch for two was $25, plus tax and tip, and worth every red cent.