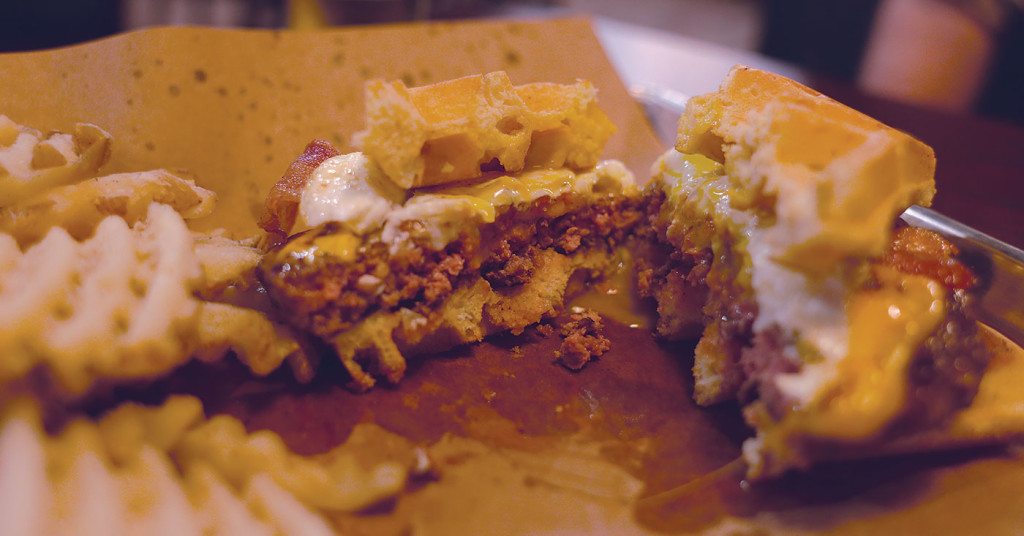 Starting with the purchase of the genre-defining coin-operated Golden Tee Golf simulator, they horse-traded and wheeled and dealed themselves into an inventory of 80-plus classic arcade machines. “We didn’t know what to do with them. We couldn’t put them anywhere, but we knew we wanted to open a restaurant,” Thomas said.

Born of this necessity, RecBar straddles an odd line between classic arcade and sports bar, and it delivers on both concepts equally well. The expanse of stand-up video games is cordoned off from the main dining area but remains close enough to steer your thoughts to making the Mortal Combat high score leader board while waiting for your food to arrive.
My dining companion, a well-known restaurant pro (and closet video-game nerd), was helpless at the thought of dropping a few tokens into the hungry maw of his favorite quarter-eater, and he had barely put down his fork before scurrying off to feed his addiction like a 9-year-old at Chuck E. Cheese.

Featuring a rotating list of 12 beers on tap and a bourbon-focused full bar, the Jeffersontown arcade-pub is looking to establish itself as a destination for folks who live in the bustling J-town community, and as an alternative to the busier entertainment districts of St. Matthews and the Highlands. “It’s an arcade in a way, and it’s a sports bar in a way. We also wanted it to be nice enough where if guys wanted to play games, their women would want to be here. We tried to dress it up as best we could,” owner Thomas said.

While the play-it-safe menu doesn’t offer any real surprises, it delivers mostly solid noshes perfect for keeping your blood sugar up while you fight off hoards of digital zombies or fend off pixelated alien invaders hell-bent on Earth’s destruction.

Sticking to what the menu calls RecBar favorites, we started off with arcade-theme consistent “multiplayer-mode appetizers,” which included cheese and bacon-covered tater tots, and a mixed basket of buffalo-chicken and pulled-pork wanton-wrapped egg rolls. “If you’re going to feature pulled pork in four of your menu items, you’d better smoke your own pork shoulder,” my friend suggested, obviously disappointed after biting into his egg roll. And I understood his lament after my bite. The buffalo chicken roll was more palatable, but we agreed both could be improved with more careful execution.

The tater tots were better, deftly dodging a common bar-food mistake by using cheese that seemed closer to sauce mornay than the stadium and spigot stuff. Bacon is bacon and therefore rarely bad, but the oversize pound-plus of tots could have used more of it. Fewer tots, and more bacon, please. While big portions are sometimes impressive, American casual cuisine is catching up to the slow-food movement and becoming about smaller portions and better quality.

I’m a sucker for a properly cooked rare cheeseburger made of good beef, and the burger we split knocked it out of the park. Called the Breakfast Burger, this menu standout featured a half pound of prime beef topped with a runny fried egg, bacon and cheddar cheese, with two fresh Belgian waffles standing in for a bun, and it came with a side of maple syrup that never made it out of the kitchen, which was a-OK with me. The guys and gals in the back surely know how to griddle a good burger, though. Big, beefy flavor came right through and dominated the breakfast-for-dinner sandwich, as it should. The tender patty had a nice sear on the outside yet wasn’t overcooked, a difficult balance to strike. The fried egg was on point, too, with a perfectly cooked white and a proper runny yolk, lending an additional layer of fattiness that complemented the burger nicely. The side of waffle fries were oddly floppy and devoid of browning or crispness, which we left ignored and uneaten, perhaps a victim of an overtaxed deep fryer. It’s the kind of thing that can easily happen in the early days of a new restaurant that relies heavily on fried food and is busier than its management probably anticipated.

Two appetizers, three beers, a well-made rye Manhattan and a signature burger came to exactly $50 before tax and tip.•