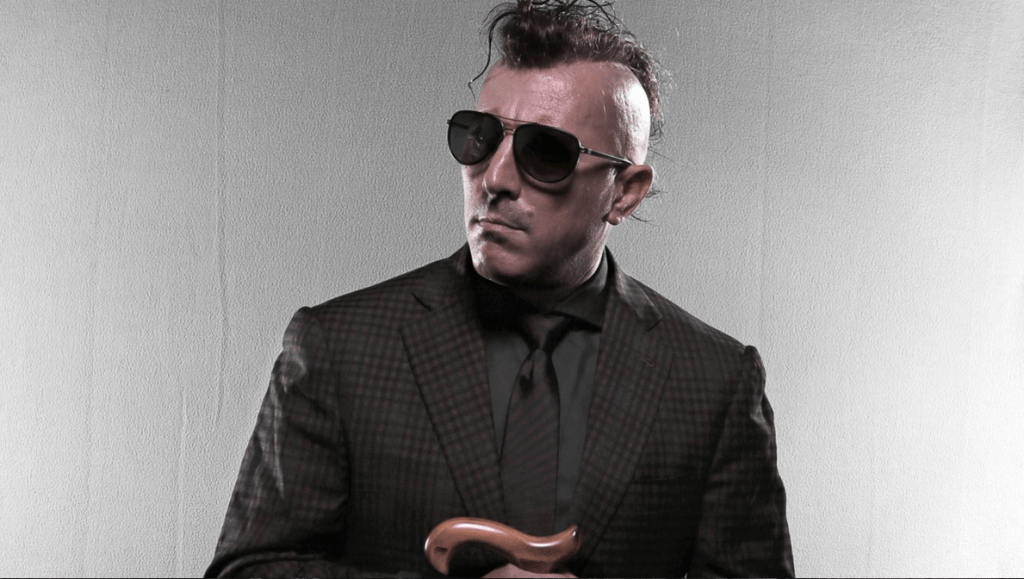 Nik: Last night got ruthlessly weird. Puscifer brought their “Money $hot” tour to the Louisville Palace with what could be argued as a gigantic performance art piece. The un-billed opener Luch-ifer started promptly at 7:30 p.m. and, without playing a single note, completely boggled my mind. Mostly because they aren’t a band. They are five luchadors playing out an (exactly) 28-minute fight in a full wrestling ring to win some key to a jail or some bullshit. I have no idea. It was lunacy. A small contingent of the crowd sat on bleachers on either side of the stage observing this spectacle. As the two male/female teams, in blue and red respectively, beat each other up and talked an almost unreasonable amount of shit to each other, a fifth luchador dressed in black came out to serve drinks and break the fight into a “Queen B” remix backed dance party. Later, they all got angry with him and then he knocked them all down out of the ring and stole the jail key. He won, I think. I think…

After the red-vs.-blue luchador bout, Puscifer took the stage. Beside the fact that Puscifer sounds amazing live, two things I took from this show were an omnipresent harmonies and how cleverly that lead singer Maynard James Keenan kept himself from being the center of attention almost the entire show. Vocal duties are shared between Keenan and fellow lead singer Carina Round.

Keenan keeping himself hidden during the show is not a new thing. Many people know of his particular distaste for being on stage from his days in Tool when he would hide in complete darkness. I don’t think this has gone away, but he has grown older and has become much more clever about hiding himself in the open behind theatrics. I say this because of the presence of the luchadors throughout the entire show: how the drummer was placed front and center on the stage in front of the wrestling ring, the black luchador mask he wore the entire show and other small distractions such as a mechanical cock fight before, during and after the song “Toma.” No one saw his face until 45 minutes into the show where it came onto the LCD screen and shot lasers from his eyes, melting two luchadors. Everything was in place to obscure him or direct attention away to the other various going ons on stage and that is how it should be. This band is a collaborative effort through and through, and it’s obvious by the demanding presence of their sound on the stage. We all took a strange road trip and got dropped off promptly at 10:15 p.m. with our heads spinning.

Scott: With his art-rock side project, Maynard is definitely clever in how he avoids the spotlight: the psychedelic videos on the full theater screen, the luchadors beating each other up on stage right and stage left, with the drummer in front, while he and Carina Round sing from a dimly lit wrestling ring. He’s not straight-up hiding — pinning himself in a space where’s he’s as close to being invisible as possible, like he often does during Tool performances — but he’s not the center of attention, either. He’s there, center stage, elevated, but the sensory-overload theatrics perpetually divert audience attention in dozens of directions. And it seemed like he was having a lot more fun than when I saw him with Tool a few years ago. And why wouldn’t he be? He’s created his own Willy Wonka-esque traveling dream world, a strange vortex of incredible talent and freewheeling antics. It seems like something you could only pull off as an already famous, half-mad scientist, who wants to prioritize fun while still valuing quality. It all screamed “if I’m not getting my kicks, why even do this anymore” and that passed the test of why it would be memorable for the audience as well, because live music can be an almost surreal experience that takes us out from under the weight of real life for a few moments, but, if it’s not bringing something beyond the record — which can certainly mean a lot of different things — why be there? This was definitely something beyond the record. It’s actually something that’s almost beyond being able to be explained. It’s certainly worth the price of admission.