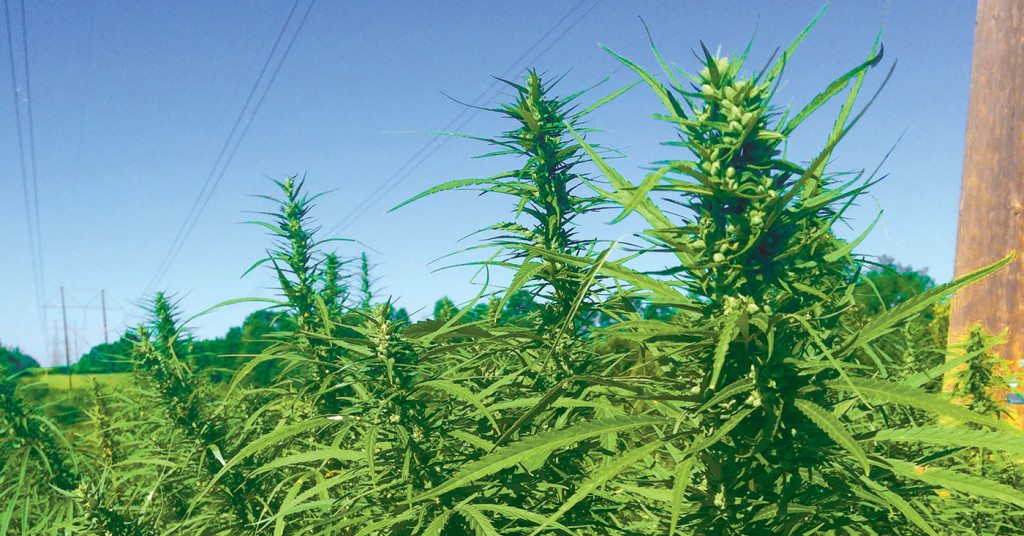 Last year Josh Hendrix harvested 5 acres of hemp on his farm in Mount Sterling, Kentucky, selling the fiber to be made into car dashboards and other products. This year, he hopes to earn even more money by selling his 10-acre crop to a company that extracts hemp oil to develop new drugs.

While Colorado and a few other states have embraced legalization of marijuana to solve their budget problems, Kentucky is far more restrained, experimenting only with hemp production as a way to boost the economy.

“People are excited about the idea of growing hemp since it’s been outlawed for so long,” said Hendrix, who is growing hemp, marijuana’s cousin, under a 2013 state law that allows hemp to be grown for research purposes. “I think it could even replace tobacco.”

Balancing Hendrix’s enthusiasm about hemp are others who say it is unlikely to take the place of Kentucky’s signature crop of tobacco because of the uncertainties of growing and selling hemp and competition from Canada and other countries that have longer-established hemp production.

Some in the business of processing hemp agree that it may not be a miracle crop, although it is not a flop.

“People are clouded by the marijuana industry, they think that hemp is this golden goose like the marijuana industry, and it’s not. It’s destined to be an industrial commodity, so it has to compete on cost,” said Trey Riddle, chief executive officer of Sunstrand Industries in Louisville, which processes fibers from bamboo, flax and now hemp to create sustainable products such as car panels and animal bedding. “It’s going to require large scale infrastructure, economies to scale, for it to penetrate into society in any major way. It’s going to be another option in a sea of options.”

The first recorded Kentucky harvest of hemp was in 1775 by the settlers of the small Central Kentucky town of Harrodsburg, Kentucky.

“Hemp was a staple crop for them and they would use the seeds as food and the fiber to make clothes with,” said Andrew Patrick, graduate editorial assistant at the Kentucky Historical Society.

Kentucky would become the leading producer of hemp in the United States, peaking with over 40,000 tons of hemp produced in 1850. Sadly, that feat was accomplished largely on the backs of slaves. “Because hemp can be such a labor intensive crop, especially before the invention of modern harvesting machinery, hemp farming was done almost entirely by slave labor,” Patrick said.

Kentucky led the nation in the production of hemp until the mid-1850s before cotton and imports of other materials replaced it in the latter half of the 19th century, according to a 2013 University of Kentucky report on the economic possibilities of hemp.

“You see small spikes of hemp production in Kentucky after that, one during [World War II] when the Army was desperate for materials, but hemp was on a steady decline,” Patrick said. “So by the time it was outlawed by federal government, it was largely a moot point.”

Hemp is a variety of cannabis sativa and the same species as marijuana, although it is genetically different and distinguished by its use and chemical makeup. Yet because of its relation to marijuana, hemp was outlawed by the federal government and designated a Schedule I narcotic along with heroin, cocaine, methamphetamine and other substances, despite having inconsequential levels of tetrahydrocannabinol, or THC, the chemical that gets you high.

As the United States largely ignored the crop, its viability was explored in other countries. Some 30 countries grow hemp with worldwide acreage totaling about 200,000 and production around 380 million pounds in 2011, according to a 2015 Congressional Research Service report.

The North American Industrial Hemp Council Inc. and others claim that hemp can be used to produce over 25,000 products, including fabrics and textiles, paper, carpeting, home furnishings, industrial oils, cosmetics, pharmaceuticals, auto parts and food and beverages.

The Hemp Industries Association estimates that the total U.S. retail value of hemp products in 2013 was $581 million.

In Louisville, Riddle, of Sunstrand, believes hemp’s potential is exaggerated.

“Hemp is definitely over-hyped,” said Riddle, of Sunstrand, which was a winner of the 2015 Vogt Invention and Innovation Awards for its work with hemp. “There’s a lot of propaganda about how it can do 25,000 things, and that’s great: It can do a lot of stuff, but I think we really need to focus on the ones that are commercially viable.”

Riddle said such plant-based products are cheaper to produce than are plastic and fiberglass, and they are more sustainable because they are made of rapidly renewable resources, are biodegradable and, as a crop, assist in trapping carbon dioxide. And while he is excited to have hemp as an option in the materials industry, he doesn’t believe it’s going to take over the industry.

One unique property of hemp could help it succeed, Riddle said: Cannabidiol, an oil extracted from hemp that is being explored by the pharmaceutical industry for it’s potential uses.

In Kentucky, the most recent chief proponent was then-Agriculture Commissioner James Comer. He championed the legislation allowing the pilot projects. He told an audience at the 2015 Hemp Industries Association Conference that “We have hundreds, hundreds of people employed in the industrial hemp industry in the state this year and next year it’s going to be thousands of people employed in Kentucky.”

Even if Comer’s prediction became a reality tomorrow, and 40,000 acres of hemp were planted, that would still only be a little over half of tobacco production in Kentucky.

This year, hemp crops account for only about 4,500 acres in Kentucky, while 72,900 acres of tobacco were planted in 2015, according to a federal agricultural census. Hay accounted for nearly 2,370,000 acres last year.

And the 2013 economic study from UK predicted the number of jobs generated by hemp would be in the dozens, not hundreds, at least in the short term. The study’s conclusions included a general indication that hemp seed production can compete with the profitability of mainstream grain crops; hemp fiber production does not appear profitable relative to other crops, given the assumed range of fiber prices and yields; and it does not appear that anticipated hemp returns would be large enough to entice Kentucky farmers to shift out of grain production, except perhaps at the highest assumed prices for a hemp seed-only enterprise.

The 2015 study by the Congressional Research Service concluded that the United States would have difficulty finding a place in the world market. “Canada’s head start in the North American market for hemp seed and oil also would likely affect the profitability of a start-up industry in the United States,” the report says.

But the current  agriculture commissioner, Ryan Quarles, said it is important to remember that Kentucky’s pilot project is still in its infancy, and that there is continued interest with over 4,000 acres of hemp scheduled to be planted in 2016.

For him, the return to hemp is a return to Kentucky’s agricultural roots, as his great-grandfather was among those who grew it. “I do think hemp is a viable crop for the Commonwealth,” he said. “Hemp is a crop that can connect our past to our future.”

David Williams, professor at the University of Kentucky Plant and Soils Science Department and part of the UK Industrial Hemp Research program, said the impacts of expanded hemp production in Kentucky are difficult to predict.

“It’s a little like asking: What came first — the chicken or the egg? Farmers aren’t going to grow hemp unless there is a market for it, and there won’t be a market for it until farmers start growing it,” Williams said. “That’s why we’re researching it to learn about the best ways to grow and harvest it, and people are testing the best products to make with it.”

How to speed expansion

Chad Rosen is the founder of Hemp Foods America, a company in Campbellsburg, Kentucky, that specializes in consumable hemp products like hemp seeds and hemp protein bars. He moved from California to Kentucky a year ago to participate in the hemp pilot project.

“Other states have legislation that allow you to grow hemp, but Kentucky has the strongest industrial hemp research program in the country,” Rosen said.

Rosen said he plans to have 200 acres of hemp grown this year by farmers in Henry, Oldham, and Shelby counties. He said they will harvest the seeds for sale on Hemp Food America’s website and sell the remaining stalk to companies like Sunstrand for use as a fiber.

Rosen said he is paying farmers more for hemp than they would get for other crops. Still, not all of Kentucky farmers were eager to grow hemp because not knowing the best ways to grow it and what kinds of yields to expect make it risky, he said.

“At the end of the day, we aren’t guaranteed of our supply, and we certainly don’t want to tell 3,000 farmers to grow hemp and then have all of them fall flat on their face,” he said.

Rosen said they are working to build up their demand slowly to ensure they don’t over-promise what they can supply. He said they could expand production more quickly if they could generate more interest from investors.

“Investment is really key [and] this is not a great state to raise pre-revenue concept start up money in,” said Rosen. “I feel like the state is really concerned with wealth preservation instead of wealth creation. The people that have a lot of the money like to hold on to that money.”

Farmers who want to participate in the hemp pilot project must first apply for a permit from the Kentucky Agricultural Department, a permit which could in theory be denied.

State Sen. Perry Clark, D-37, introduced Senate Bill 262 which he said would streamline the permitting process to encourage more hemp production, but the bill failed to pass. Clark was also behind the “Cannabis Freedom Act,” which like Colorado’s legislation would have decriminalized marijuana.

“There are too many farmers in this state interested in hemp, even if it’s just for themselves,” Clark said. “Interested in hemp for their feedstock, for the fiber to make concrete with, for their own personal use. But a lot of them have been turned down.”

Clark said there is no reason that farmers should not be able to grow hemp, and that while its potential for economic impact is debatable, that is beside the point.

“There are no negatives, none whatsoever, to expanding hemp production in Kentucky,” said Clark. “There’s no issue. The issue is the crap they made up, the problem is the prohibition, not the plant.” •

Hemp was first planted in Kentucky by the settlers of Harrodsburg, Kentucky in 1775.

Proponents claim that hemp can be used to produce over 25,000 products.

An estimated 55,700 metric tons of industrial hemp are produced around the world each year.

China, Russia and South Korea are the leading producers of hemp, accounting for 70 percent of the world’s industrial hemp supply.

Canada had 38,828 licensed acres of industrial hemp in 2011 with Canadian exports of hemp seed and hemp products estimated to be more than $10 million, with most going to the U.S.