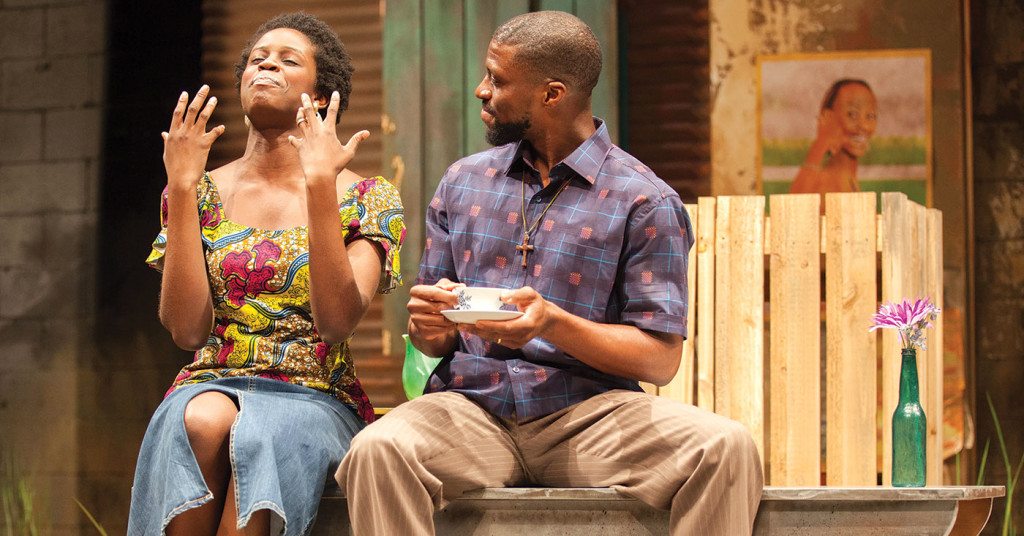 In October 1976, Courier-Journal columnist Jean Dietrich previewed a new undertaking at  Actors Theatre of Louisville, The New American Writers Festival. Of the new venture — which seemed a risky stretch for a company with a reputation for cautious, quality programming — she wrote, “Some might consider it madness.” The four plays in Jon Jory’s inaugural festival lineup included David Mamet’s “Sexual Perversity in Chicago” (which was in the midst of its premiere New York run) and the world premiere of Mamet’s “Reunion.” The bill also included Tom Cole’s “Medal of Honor Rag,” a play about an African-American Vietnam veteran and his therapist; and Jack Heifner’s “Vanities,” a sharp-edged study of a trio of Texas cheerleaders.

A few days later, when the festival (now known as the Humana Festival of New American Plays) was underway, Courier-Journal critic William Mootz, summed up the first lineup: “They all have, perhaps inevitably, one thing in common — an exploration of the alienating forces plaguing contemporary man…. Survival, especially survival as the world seems to be falling apart in these last decades of the [20th] century, is the principal theme of Jory’s New American Writers’ Festival. The plays as a whole are astonishingly varied, astonishingly witty, astonishingly entertaining. And they deserve to be astonishingly successful.”

Except for the change of century, that passage is an apt description of this year’s festival, which closes this weekend, with all the plays running through Sunday (including a short bill of “Ten Minute Plays” that runs Saturday and Sunday).

Building on the artistic momentum they’ve gathered over the last few years, Artistic Director Les Waters and his team (including former Executive Director Jennifer Bielstein, who recently took up a new position at the Guthrie Theater in Minneapolis) have again assembled a superb lineup that will delight, anger and puzzle and provoke theater-goers.

Whether dark or droll or whether set in set in an anonymous hotel room, an Iowa home, a creepy haunted house, or a run-down church in Uganda, all of these plays are urgently concerned with survival in worlds on the brink. And all of them deserve to be successful. If you missed our coverage of the first four play (“Residence,” “For Peter Pan on her 70th Birthday,” “This Random World” and “Wellesley Girl”), you can find those reviews at leoweekly.com.

“Wondrous Strange,” the annual Acting Apprentice Company production, written by Martyna Majok, Meg Miroshnik, Jiehae Park, and Jen Silverman and directed by Marti Lyons and associate director John Rooney, is among the strongest offerings in the delightful history of the Apprentice Company.

Filled with ghostly apparitions, clever storytelling devices and some downright scary moments, the nine segments slip effortlessly from giddy fun to disturbing terror in seamlessly integrated tableaus that use startlingly simple special effects: A flashlight in the right hands can be far more frightening than a $100,000 worth of computer-generated-imagery effects. The ingenuity of the tech folks (Daniel Zimmerman, scenic design; Beatrice Vena, costumes, Paul Toben, lights, Christian Frederickson, sound, Philip Allgeier, media; Drew Fracher, fights) is a great match for the fantastic writing and ideas and confident acting in this production. The corps of Apprentice is spectacular — whether in a comic, Jersey Shore-inflected tale of three ghost hunters and a spooky lass (“Ghost Bros,” by Jen Silverman), the verbal and visual wit of Jihae Park’s “gts story,” the sibling darkness at the heart of Meg Miroshnik’s “Bug,” or the bravura joys of Jen Silverman’s “The Bonnets” (with grand music by Max Vernon).

Finally, the most powerful play on this season’s bill — and among the finest works in the long history of the festival — is Hansol Jung’s “Cardboard Piano,” a brilliant script powerfully executed by Director Leigh Silverman (with assistance from apprentice director James Kennedy), a perfect cast and superb technical work. In Uganda, on the eve of the millennium and in a missionary church with a hole in the roof — through which the congregation can come closer to God, two idealistic young women, Chris (Briana Pozner) and Adiel (Nike Kadri), are in the hot, giddy throes of  love and have decided to take vows with one another despite unimaginable risks and the brutal revolution that’s playing out around them. A bloodied child warrior, Pika, (Jamar Williams) stumbles in and interrupts happiness. And he’s soon followed by his brutal commander (Michael Luwoye).

What transpires is drama of enormous complexity and depth. Jung’s script is smart, fearless and unsettling. And so are the performances. This cast can pull you so deeply into moments of pure bliss and unguarded openness that the shock is palpable when reality intrudes and protective facades pop up. All of them have moments of transcendent greatness in a play that demands nothing less. And I’ll say no more — other than to urge you to see this extraordinary production  (William Boles, scenic design; Kay Voyce, costumes; Keith Parham, lights; M.L. Dogg, sound; Jason Webb, original music; Drew Fracher, fight director; Kate Glasheen, dialect coach).