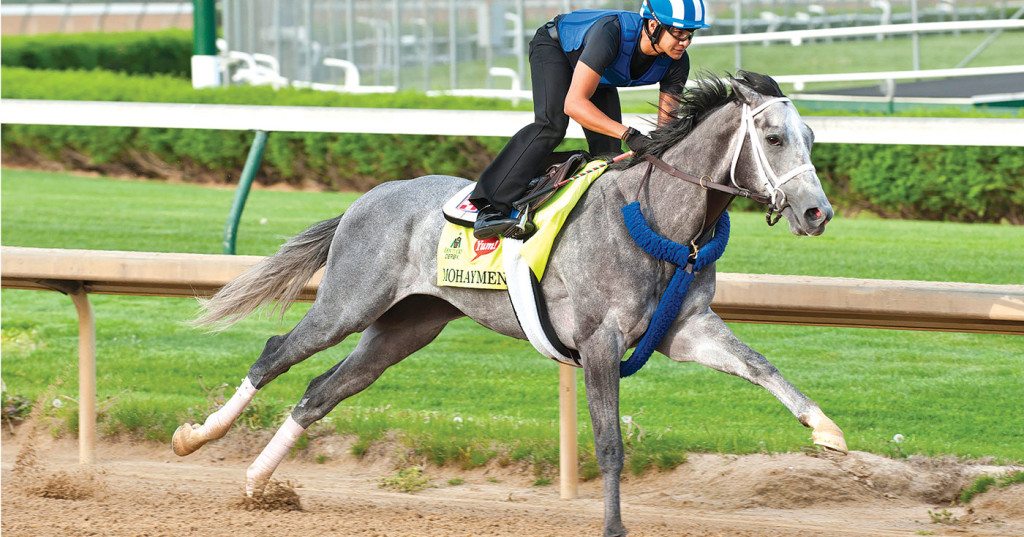 A plane lands, a van pulls up to Churchill Downs — and boom! — out pops another gray horse for the 2016 Kentucky Derby.

At least four grays are set to run in the Derby, which — according to a quick bit of research and a scan of the old gray brain cells — is the most in history. Usually there’s one gray horse in the Derby, maybe two. Three ran in 2010. But never four. And these four grays — Creator, Destin, Mohaymen and Lani — are just the best of a bunch of gray horses that have shown prominently all spring in the prep race run-up to the 142nd Kentucky Derby, May 7, at Churchill Downs. Maybe it’s a mirage, but it seems like every time you look up, there’s another gray horse.

Nobody knows. The gray phenomenon might simply peter out to just an oddity when the race is run. Picking horses by color is definitely no way to stay ahead of the light bill. And the four grays in question figure just mid-pack in the early betting lines. Several more commonly colored horses — bays, chestnuts and dark bay/browns — are expected to start at shorter odds and be picked by most public handicappers.

Putting aside dumb hunches, Nyquist looms as a standout favorite for the Derby. The undefeated bay (not gray) colt is named for Detroit Red Wings hockey star Gustav Nyquist, and he has done it all. At 7-for-7, Nyquist has won more races than some of his Derby opponents have even been in. He’s won the Breeders’ Cup Juvenile and Florida Derby, and he banked over $3.6 million — the most purse money won by any horse heading into any Kentucky Derby.

Plus, Nyquist has taken his show on the road, winning in California, New York, Kentucky and Florida. The horse is owned, trained and ridden by the same team (Paul Reddam, Doug O’Neill and Mario Gutierrez) that won the Derby just four years ago with I’ll Have Another. And thank you very much, they’d like another.

Just one snag in the story: Nyquist is a horse who is no way bred to get the 1¼-mile Derby distance.

Who says so? A lot of people, from bloodlines experts to amateur Derby historians. Nyquist is a product of speed-oriented family lines with a history of almost no success in the Kentucky Derby. Some people say the Dosage System is hogwash, but Nyquist’s dosage diagram charts out at a threadbare 1-2-1-0-0, with a speed-bred dosage index of 7.00 that lies far beyond any Derby winner.

Of course, no horse has ever beaten Nyquist.

But let’s take a look at a few that might.

A strong case can be made for Brody’s Cause, the winner of the Blue Grass Stakes. He’s a drop-back horse that will try to come on under rider Luis Saez, who is good at that. Trainer Dale Romans says Brody’s Cause is his best Derby shot so far.

Then there’s Mor Spirit, this year’s hopeful from four-time Derby winning trainer Bob Baffert. Mor Spirit comes in off a second in a muddy Santa Anita Derby. It looked like jockey Gary Stevens simply cruised Mor Spirit home through the mud, saving his best for Louisville.

Which was probably good idea, because there was no touching Exaggerator that day in the Santa Anita Derby. As noted, that race was run in the mud, and Exaggerator loved it. Jockey Kent Desormeaux laid his horse way back early and then flew past the field. Turning for home, Exaggerator was running so fast his feet nearly flew out from underneath him. But the colt just kept running, spraying up mud like a race car driver making the slide part of the ride. Mud or no mud, a horse like that shouldn’t mind traffic in a 20-horse Derby field.

Gun Runner, a powerful winner of the Louisiana Derby, appears to be on an upward path, with rising talent Florent Geroux to ride. It’s a similar story with My Man Sam, who came on fast to be second in the Blue Grass. He’ll be ridden by the top young jockey, Irad Ortiz, Jr.

There are other closers. Tom’s Ready chased Gun Runner home in Louisiana and now gets more distance. Whitmore will have jockey Victor Espinoza, trying for his third-straight Kentucky Derby victory. Espinoza, Stevens and Desormeaux each have won three times.

Now, about those grays.

Creator came from last to win the Arkansas Derby and looks sharp now at Churchill Downs — toned up and confident. A must for exactas and trifectas.

Destin sails in under the radar after winning the Tampa Bay Derby with big-money rider John Velazquez. You know Destin. That’s where you go when you’d like to go to Miami but have children.

At one time, Mohaymen was hailed as a coming star and potential favorite for the Kentucky Derby. Then Nyquist came to Mohaymen’s track in Florida and blew Mohaymen back to the barn.

But that may not be the end of the story. Trainer Kiaran McLaughlin and his assistant and brother Neal were both beaming last week when Mohaymen turned in an effortless-looking four-furlong work in :46 4/5 seconds at Churchill Downs. A light-framed gray, Mohaymen wears glue-on shoes and runs like the wind.

“This is the Mohaymen we’ve been wanting to see,” says Neal McLaughlin. “It gives you goosebumps when he works like that.”

And one more gray, named Lani, which comes to the Derby from all the way around the world. Born in Kentucky, named in Hawaii, raced in Japan, won in Dubai — and now back to Kentucky to Run for the Roses. Like Creator and Mohaymen, Lani gets his gray color from sire Tapit, the star stallion that often stamps his offspring with his own gray color.

“The dam of the horse is Heavenly Romance, and the owner wanted to use her name in the colt’s name — and Lani means heavenly in Hawaiian,” explained Keita Tanaka, agent for owner Yoko Maeda.

“If Lani has an advantage in the Derby, it is his experience at more distance,” said Tanaka, noting that Lani won the U.A.E. Derby at 9 ½ furlongs, close to the Derby’s 10. “He is a strong horse.”

And the opposite of Mohaymen. Not light-footed but ruggedly built.

But do all these grays have a better or worse chance than the more commonly-colored horses in the Derby? The same, actually. Grays represent about five percent of the thoroughbred horse population — and they win five percent of the races. Just as other colors win right at their percentage.