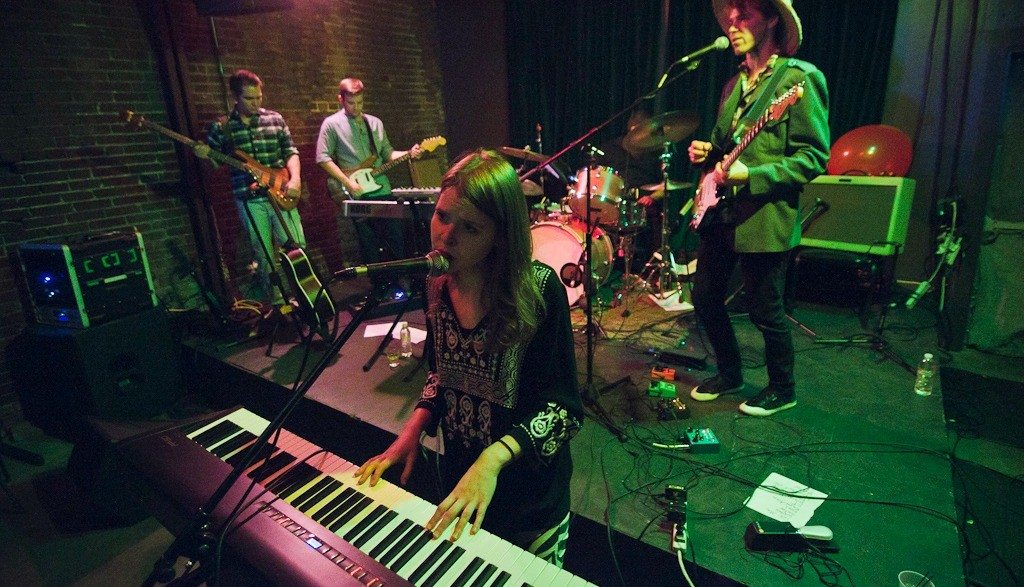 Defining Five is a series at Haymarket Whiskey Bar, where, each month, five people from the Louisville music community pick five songs that have moved, inspired or impacted them and then play them during a DJ set. After each event, LEO Weekly will publish an interview with all five to get some context as to why each song was selected. (Stay tuned to Haymarket’s Facebook page for updates.)

“Nothin’s Gonna Stand In Our Way”
by Spectre General
from the album Transformers The Movie
“There’s an interesting side story, because it says the artist is Spectre General — Spectre General is not a band. The real band is called Kick Axe and, apparently because it was a children’s movie soundtrack, the band shows up at a record store one day, to see that soundtrack that they were on and their name has been changed in all of there songs, and it’s never been restored to the proper credit. But, this movie was my favorite movie growing up and it was the first time I had seen an action-space-opera-type thing. This song really stuck with me. A fun fact: all of the Little Hearts Records compilations that we do, every single one of them after a line of dialogue from this movie. It’s six years strong, just pulling lines out of this movie. This soundtrack means a lot to me, in general.”

“Stay Positive”
by The Hold Steady
from the album Stay Positive
“This song is one of those things where, when it comes to how I try to run business and stuff, some of what’s said in the song, is where that comes from. This is more of an anthem for me, than it is just a song.”

“Holy Fuck”
by I Am The Avalanche
from the album  Avalanche United
“This song is about a guy who was kind of out of his scenery, and this was a big come back thing. And it’s talking about how much things have changed. And when I think about the last 10 years of running a business, it’s kind of the same thing. I’m always thinking about how things have changed in just 10 years, let alone how things are going to be different soon. When it comes to doing music stuff, styles and opinions and genres happen so quickly. “

“Paper Lanterns”
by Green Day
from The Slappy EP
“To this day, this is still my favorite Green Day song and it’s 20-some years old. This was actually one of the very first 7-inches that I have ever owned, but it’s actually my second copy of it. It was the first 7-inch that I ever bought and it was destroyed in a flood. I lost all of my records. It was one of the things that I had to get back and I tracked a copy down. Now it’s been reprinted like 50 more times, but this is one of the last first presses that I’ve seen.”

“Stranger Than Fiction”
by Bad Religion
from the album Stranger Than Fiction
“Bad Religion is probably always going to be one of my favorite bands no matter what, and this song is one of the most under-appreciated songs that they ever did. When people look back on this album, they always talk about ‘21st Century [Digital Boy].’ This song was the one that made this record for me.”

“Skip Divided”
by Tom York
from the album The Eraser
“I wanted to choose a Radiohead track, but I didn’t have Kid A, but I had The Eraser, so I ended up choosing this track. Radiohead has been a big influence for me.”

“The Modern Age”
by The Strokes
from the album Is This It
“That album was pretty much, throughout high school, the only thing I listened to.”

“Devil In A New Dress”
by Kanye West
from the album My Beautiful Dark Twisted Fantasy
“I’ve been a Kanye fan for as long as I remember, and everything he does is beautiful … well, at least that album. Everything else is just golden. The reason I chose that song specifically is a lot of my work has a lot of contrast between elegance and grit, and I think that song captures that, in addition to the contrast between good and evil or God and Satan.”

“Introducing Foxy”
by Foxy Shazam
from the album Introducing
“That was one the most insane shows that I’ve ever been to — when they played at Skull Alley. I had never heard of them before and they played a free show, and that track sort of became that whole summer.”

“Gimme Three Steps”
by Lynyrd Skynyrd
from the album Pronounced Leh-nerd Skin-nerd
“Love Skynyrd. Great song. One of my favorites.

“Life’s Been Good”
by Joe Walsh
from the album But, Seriously Folks…
“It’s a lot of fun. It really just describes my life right now. It makes me feel really nice.”

“Redneck Woman”
by Gretchen Wilson
from the album Here For The Party
“I’ve loved this song since I was a baby. It really describes what I like.”

“Don’t Mess With Mr. ’T’”
by Marvin Gaye
from the album Trouble Man
“Growing up, I didn’t know what rap was, but I liked rap. The sounds in that, the way that it was put together, it was kind of a precursor to rap in the ‘70s. And, it was some cool stuff my father would play around the house, and that resulted in me liking hip-hop.”

“Retrospect For Life”
by Common
from the album One Day It’ll All Make Sense
“I didn’t grow up listening to Common, but when I saw this album cover — him and his mom sitting, and he had this hat on — I thought it was the dopest album, so I got it, and when I started listening to it, ‘Oh shit, that’s Common.’  The song features Lauryn Hill, and it has some subject matter that was kind of too heavy for me as a child, but, as I grew up, I was able to understand it and it made a lot of sense.”

“Mass Appeal”
by Gand Starr
from the album Hard To Earn
“What can I say: Classic hip-hop. When I think of hip-hop, this is the song that plays in my head. When I wake up in the morning and I turn on my turn tables, this is what I’m thinking about.”

“Love Light In Flight”
by Stevie Wonder
from the album The Woman in Red
“It’s such a dope album — it just makes me want to dance. Anytime you play that record, everybody wants to get up and dance. It’s full of Stevie’s inspirational quotes and Stevie’s keys. It’s a dope song that everybody should check out.”

“The Boomin’ System”
by LL Cool J
from the album Mama Said Knock You Out
“I literary rocked that tape until the tape popped, like Biggie said. ‘Boomin’ System’ has this crazy loop, and I used to rewind it back and forth, back and forth — and it popped. It’s another one of those songs, where if I’m plugging in my turntables, or if I’m making a mix, I want it to sound like this sounds in a car — and I know he made it to be played in a car.”

“Alameda”
by Elliot Smith
from the album Either/Or
“It’s just one of my favorite albums of all time. I remember listening to that when I was in high school and being totally blown away by the songwriting, because I had never heard his style of songwriting before — he uses a lot of really cool chords, like minor sevens, and really interesting textures.”

“Crown of Love”
by Arcade Fire
from the album Funeral
“I loved when Arcade Fire came out with Funeral  — it wasn’t like anything else. It had such lush instrumentation in a time when there was a lot of garage and indie rock. How there songs developed, it was like there were three songs in one. It totally blew my mind, and made me re-envision what a song should be.”

“Only The Lonely”
by Roy Orbison
“Roy Orbison has my favorite male voice of all time — it has so much character and range. And there’s sadness kind of embedded in his voice. I think I’m kind of hopeless romantic to things that sound sad or nostalgic. I’m kind of drawn to that  characteristic of beauty in sadness.”

“Happiness Is A Warm Gun”
by The Beatles
from the album The Beatles [The White Album]
“That is my favorite album of all time. I love every song on the record, but that’s also one, it’s just four songs in one and they’re all equally good. It’s starts off with this really beautiful melody and it develops into other really interesting parts. I was really young when I heard that for the first time and it really captivated me.”

After the five DJ sets, a Defining Five alumni returns for “The Best Year” — a one hour DJ set playing music from a single year:

“I picked 2011 because Live Love A$AP came out that year and it’s pretty much my favorite album. Once I settled on 2011, and started digging in to see what all came out that year, I was MIND BLOWN by how good the year was in music. Kanye and Jay Z’s Watch the Throne, SBTRKT’s self-title album, Chance the Rapper’s FIRST Mixed Tape … it was a fire year for music. If you missed the set, you missed the best hour of your life. Sorry not sorry.”