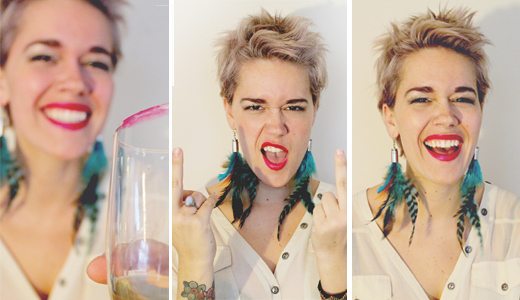 It’s true that each time a new season rolls around, and the Earth changes its relationship with the sun, I have reason to believe that particular yearly division is the perfect time to celebrate. Be it the autumnal crunch of leaves and hordes of festivals that sprinkle throughout October or the dense humidity of a July afternoon in the Bluegrass that piques my sweltering thirst, yes — I can surely always find a reason to imbibe. Perhaps it’s the budding excitement of the Kentucky Derby just around a bourbon-soaked corner, or even our ghastly Ohio River Valley allergies after a long(ish) winter, but it seems that spring in Derby City brings out Louisvillians en masse as patios throughout town open for business. I’ve cultivated a libation-luxe list of the newest patios in the Lou to give you the inside scoop on where to go and what to drink when you’re hankerin’ for a beverage in the sun. Because, as I believe Elle Woods would say, sunshine gives you endorphins. Endorphins make you happy. And so does booze.

2016 is bringing fresh creativity to the Louisville food and drink scene, and The Hub Louisville, bar baby of Talmage Collins and Eric Wentworth, is a welcomed addition to Clifton’s Frankfort Avenue. The Hub moved into the sprawling location of a former tire shop, bearing an aesthetic collision of industrial vibes, bold and upscale oversize booths and dive-bar fun (which includes pool tables and shuffleboards). The patio is vast, with several tables, a fire pit, a standing bar facing bustling Frankfort Avenue and wooden stadium style seating — perfect for sampling the well-crafted cocktail list. While I and my friends, Maureen and Michelle, tasted, quite literally, the entire drink list at The Hub when we dined, we all swooned over the Hey Babe (Citadelle Gin, green Chartreuse, black pepper ginger syrup, jalapeño and house grapefruit bitters), a delectably spiced yet well-balanced coupe of nom juice. In addition, The Wren Bird (vodka, lemon, Earl Grey syrup, sparkling wine, lemon oil) would be great for day drinking, according to Michelle.

Louisville has long deserved a local business that would do justice to the former Tumbleweed location on River Road, and here’s hoping the delightful samplings I’ve had are a solid prophecy to Doc’s Cantina’s success. While Doc’s has only been open a mere few weeks, Falls City Hospitality Group, owner of Doc Crow’s Southern Smokehouse and Raw Bar, seems to have taken the time and attention to detail to open a funky twist on a Mexican riverside saloon. With double-decker outdoor seating, local art (including wall murals), and wine on tap, y’all best believe I will drink in a waterside sunset many a time. A sucker for mezcal, I swooned over the Legend of Gusano (Nuestro Mezcal, Copper & Kings Brandy, Campari, Dolin Rouge, habanero) while bartender Kelsy (not me, y’all) suggests the Mai Caliente: “It’s a spicy mai tai with orgeat, jalapeño syrup, Plantation Pineapple Rum, Orange Curacao, and lime.” I look forward to working my way through Doc’s seemingly well-crafted list of libations time and time again.

When word got out that John Varanese had begun a new riverside venture that would feature a fine dining restaurant/raw bar and a nightlife venue, let’s be honest, we all knew it would be stellar. Varanese has never been one to overlook details when it comes to food and beverages, so we understand that it took some time to execute his vision. River House Restaurant and Raw Bar and Levee at the River House are just next door to the Water Tower, boasting sprawling river views and, seemingly, a multitude of experiences. While I visited for a casual glass of wine at the bar at River House (the Levee wasn’t open for business just yet, but is now!), both namesakes host stellar al-fresco setups with fire pits. You can dine indoors at a table for a fine-dining experience or at Levee on plush couches next to floor-to-ceiling windows. One of my favorite pastimes is to drink heavily at the bar at an upscale restaurant and leave just before making a complete ass of myself. Anyone else? Bueller?

Louisville certainly wasn’t short on deck dining when we entered into the season of sun-drenched patios, yet it’s beautiful to see our city explode with the new and embrace innovative and creative concepts. Springtime in Kentucky means festivals, races, sunshine, new libation locations, and a sprig of mint in my cocktail. We’re spoiled rotten, don’t you think?