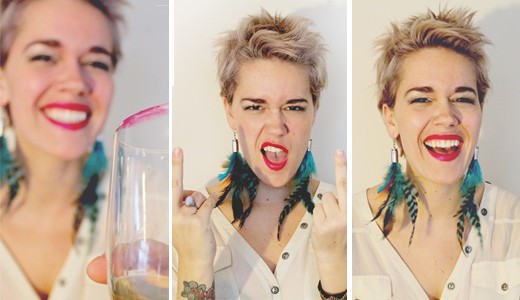 Years of late nights, intense conversations, and daily bar side “therapy sessions” have helped many a drink slinger such as myself be able to hone in on a special dexterity and prowess when it comes to reading people: A capable and experienced bartender can both guess what a bar-goer might order to drink and most will be able to form judgments on said customer based on their drink of choice. Is it fair to judge a person based on the libation that lies before them? Probably not. Does said virtuosity help us navigate our experience and possible financial implications from a guest? Yep. I decided to have a little fun with the current “GIFification” of our nation’s political climate and imagine each of the presidential primary candidates wandering into my bar for a beverage — what would they order?

Let’s imagine for a moment that Ohio Governor John Kasich meanders into a Louisville drinking establishment. While he’s flown under the radar, been dubbed a moderate of all moderates by the media, and has somehow managed to stay out of the childish playground antics threesome of Drumpf, Rubio and Cruz, let’s not kid ourselves. Kasich is a wolf in sheep’s clothing. He’s the kind of bar guest who will sit quietly drinking a Guinness — a pint that requires patience to enjoy — yet also has a flask of scotch in his coat pocket that he’s intermittently sneaking into the men’s room to pound. I imagine he’s the type of customer who appears seemingly harmless, slowly sipping his beverage over the New York Times, quietly reaching into the tip jar of his bartender while she’s shaking up cosmopolitans for the masses.

Ted Cruz bears a striking resemblance to every corporate America higher-up that comes into my bar for happy hour. He both wants to bang me and finds my tattoos and desire to make decisions about my own uterus deplorable. He may be a part of the one percent, but his palate is unrefined, so he drinks Miller Lite or any flavorless, watery pilsner we have available. But, we bar wenches must be certain to bring him a chilled glass (with a side of booger, of course).

Marco Rubio will certainly not be drinking water after the infamous State of the Union H2O debacle — Watergate 2.0, if you will. Rubio’s horribly timed need to quench his thirst on live television clearly spawned our national political discourse, after all, so let’s hope his advisors have shown him the way. Perhaps he’d embrace his Cuban American roots and order a beverage that aligns with his lineage? A nice mojito for little Marco? Or maybe a Dos Equis, since, as my friend Russ put it, “He does believe he’s the most interesting man in the world.”

While Donald “Drumpf” Trump claims he doesn’t drink caffeine or alcohol, it’s not difficult to imagine his bar banter, considering he commonly acts like a drunken, incoherent buffoon on national television. I can see it now: Trump bellies up to the bar and I ask him what he’d like to drink. “Look. You ask me what I’d like to drink. That’s a great question. When you enter a room, you don’t say, ‘Oh hello, how’s the weather?’ You say, ‘Get me a drink.’ That’s how these people are. OK? You’re a woman. You’re not a 10. You probably have blood coming out of … wherever. And yes, I’d like a drink. OK? I can buy everyone in this bar a drink. But I don’t know them. They could be rapists. I have a great relationship with bartenders. I’m a traditionalist, and everyone’s loving it. And I do understand what you’re saying. How about this gentleman with the blue tie? What a tie!” I respond by telling him I’m still not sure what he wants to drink. He proclaims his disdain for this establishment, claims to have never wanted a drink in the first place and threatens a lawsuit. Just making America great again, is all.

As far as the democratic primary candidates go, I’d surely share a beverage with both Bernie and Hillary. After the 2014 photos emerged of Hillary dancing and pounding beers with the First Lady of Colombia, I knew she was my kind of gal. Although, as my friend Jeremiah put it so eloquently, she may “order a drink from another bar under a shroud of secrecy and then refuse to divulge the drink’s ingredients.” And obviously, Bernie would support small business craft brewers and buy a round of something infused with maple syrup for everyone in the bar, including the bar staff. I think local bourbon goddess Beth Burrows put it best: “Bernie would order a Falls City Kentucky Common to relate to us Louisvillians. Hillary would order a Ketel One martini with ice crystals and bleu cheese stuffed olives — stuffed to order during Friday Happy Hour (to be one of those people) and Trump would order whatever has the most range when tossing it back at the bartender in disgust.”