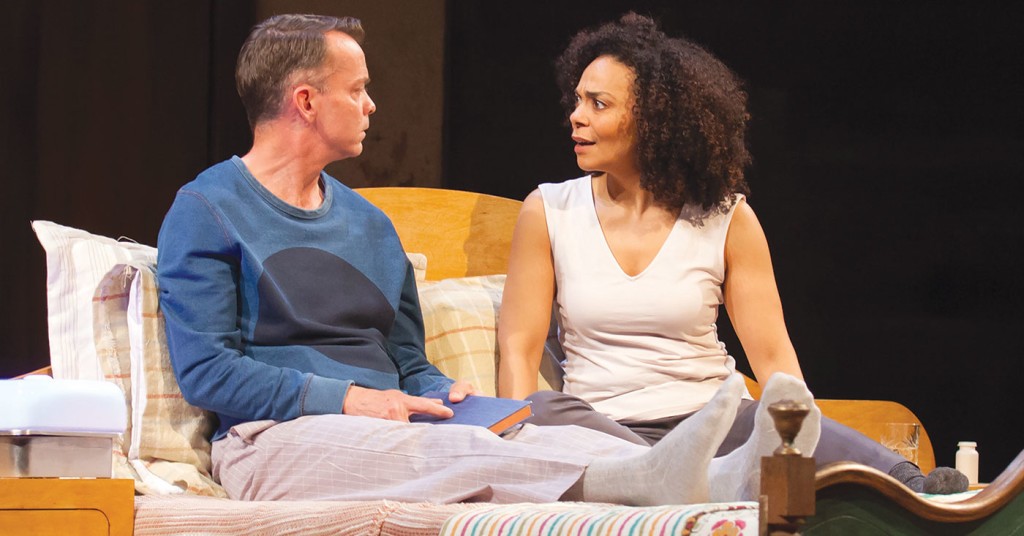 Former Massachusetts congressman and Speaker of the House Tip O’Neill once memorably proclaimed that, “All politics is local.”

In Brendan Pelsue’s new play, “Wellesley Girl,” the maxim has become a literal truth. In the year 2465, a human-induced environmental catastrophe has destroyed the world’s water supplies and killed off most of the world’s population. Four small Massachusetts towns have survived — because their residents included some ingenious M.I.T. engineers who walled off the city and devised a successful water treatment regime.

These four towns are — so the people there think — all that remains of the United States. And they preserve the political traditions. All adults are members of a Congress that they hope, someday, to be able to fully populate. They have an executive branch and a judiciary.

And they have a looming crisis. Although they thought they were alone in the world, an army has suddenly camped outside their ramparts, delivering an ultimatum. And suddenly politics matter.

That’s the setup for the fourth play to premiere at this year’s Humana Festival of New American Plays at Actors Theatre of Louisville. Pelsue’s script is a multifaceted delight. As a satirist, he has an uncanny ear for the rhythms and tropes of political satire and an even-handed compassion for the more intimate tensions that play out in bedrooms and living rooms. And Director Lee Sunday Evans brings a nimble touch to every aspect of the script, carefully shaping the balance between absurd public bombast and delicate private tensions.

The debate scenes, moderated by Chief Executive Garth (Rachel Leslie) are rhetorical feats, full of rules and talking points articulated by RJ (Phillip Taratula), the earnest head of the Foreign Relations Committee (whose foreign policy has previously been predicated on the notion that there were no foreign countries) and Scott (Jeff Biehl), a firebrand of the first order. RJ proposes to send an emissary to find out the purpose of the army at the gates; Scott argues for a preemptive strike.

And when the trench fighting rotates (literally via scenic designer Annie Smart’s fine lazy Susan sets) from public meeting rooms into private settings we find that all politics is also deeply personal.

In private, Marie (Kelly McAndrew), who survived an earlier politically driven environmental nightmare in what used to be the town of Wellesley, lobbies her ambivalent husband Max (Pun Bandhu) to take a stand and join her in fighting for the solution she thinks will save their children.

Meanwhile, we learn that Garth, whose romantic partner is a robot named Hank, may have engaged in a bit of chicanery that will affect the outcome of this debate. Hank, it should be noted, is superbly realized by Barney O’Hanlon in a memorable piece of acting that first captures Hank’s intricately comic physicality and then culminates in a ringing proclamation of robotic love.

Eventually, this matter winds up — as such questions often do — in the hands of the Supreme Court — in the person of Donna, played by Linda Gravatt, who brings to role a grandmotherly mix of gravitas and compassion.

Other roles are played by Austin Blunk, Esau Mora, Jayson Speters, and Addison Williams. Drew Fracher is the fight director. Matt Frey’s lighting is powerfully evocative at key points — as are Kristopher Castle’s costumes (especially in one scene where they are the very essence of patriotic pomp). •

Alas, it’s curtains for most of our favored local basketball squads. But on theater stages, curtains are rising at a rapid pace. At Actors Theatre, four Humana Festival plays have already premiered, with others coming this weekend (and all of them will be in repertoire until April 10).

But at least five other companies are offering notable productions this week and next.

At StageOne Family Theatre, Crocket Johnson’s “Harold and the Purple Crayon,” a classic children’s story of a creative kid on a grand mission, comes to the stage in a multimedia adaptation by Andrew D. Harris, Peter Holloway, and renowned genre-bending cellist Ben Sollee, who created the music (and performs it on stage). Public performances, March 26 and April 2. Bomhard Theatre, Kentucky Center for the Arts; 502 W. Main St., 584-7777, kentuckycenter.org.

Theatre [502], one of the city’s finest independent companies, premieres the intriguing “Qualities of Starlight”by Gabriel Jason Dean. This cosmological comedy with big bang at its core is directed by Mike Brooks and staged at Parkside Studio, Inside at Iroquois. It runs March 25–April 3.  509-1595, theatre502.org

Liminal Playhouse, a new company with a strong pedigree — many associated folks are well-respected lights of our great theater scene — is mounting a production of Sarah Ruhl’s “Melancholy Play: A Contemporary Farce” under the direction of Tad Chitwood; if Ruhl’s “For Peter Pan…” now running on the Humana bill has caught your fancy, check it out at the Henry Clay Theatre, March 24–April 3. 604 S. Third St. 553-8056, theliminalplayhouse.org

And at The Alley Theater, where zany comedy is a staple (and the concession stand is stocked with beer and popcorn), there’s “Greetings from Squirrel Lake,” a “drawing cabin farce” set on the shores of a Wisconsin lake. Directed by J.P. Lebangood, March 24–April 15. 633 W. Main St., 822-5598, thealleytheater.org

Finally, the Savage Rose Classical Theatre is reaching into the deep roots of medieval theater with a production of the great morality play, “Everyman,” directed by Kelly Moore. The timing (around Easter) and the location, Chapel of St. Philip of Neri, 236 Woodbine St., are pretty much perfect. March 24–April 3; savagerose.org. •