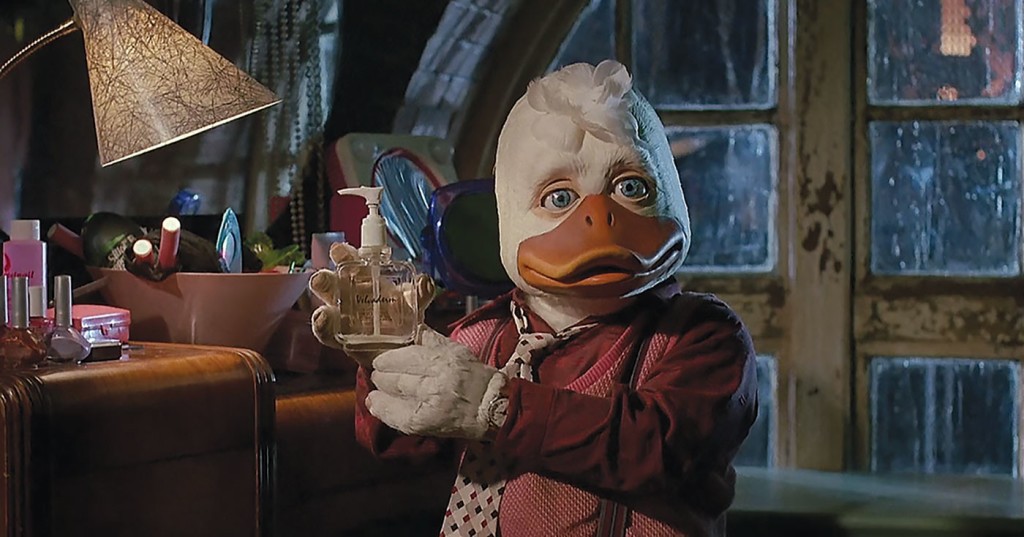 HOWARD THE DUCK
1986; $9.98-14.98; PG
We may be the only people in the world who will admit to being fans of this Marvel misfire based on their wonderfully demented comic book. We don’t care, we think it’s so bad it’s great. An experimental laser carries a grumpy duck-man from his home planet to Cleveland — which is as fowl a place as we can think of, har har. He hooks up with lovely Lea Thompson, who proves to be a real lover of nature, if you catch our drift (wink wink, nudge nudge). Lucky bird. Wots of web-footed foowishness, some bad wock music, and tewwific animated mwonsters by Phil Tippett, finally on Blu-Ray with all the bells and whistles. Quack.

SPECIES II
1998; $22.98; R
1995’s “Species” was a breakout hit, anchored by the unimaginable beauty of Natasha Henstridge as Sil, a product of genetic engineering with alien origins. The fact that she was often naked probably had something to do with it becoming a landmark monster-movie (not that we’re complaining). Henstridge returned for this sequel, now as a good girl (sorta), saving the Earth from an alien-infected astronaut (Justin Lazard) whose sole reason for living is to mate with Sil — even though it means the end of the human race! Man, can we relate. With Richard Belzer as the President. Could we make that up? Also available: A “Species III/IV” combo pack, all on Blu-Ray with gangs of bonus goodies.

CHET ZAR: I LIKE TO PAINT MONSTERS
2015; $24.98; UR
Never heard of Chet Zar? Ever heard of “Hellboy,” “Darkman,” “Ghost in the Machine,” “X-Men: The Last Stand,” 2001’s “Planet of the Apes,” or “The Ring”? Zar has lent his talents to the creation of these and countless other films, making this biodoc as much a thriller as it is a history of the “dark art” world. Today, after inspiring a generation of movie artists, Zar has moved his focus to painting canvases, filling them with bizarre and original monstrosities, creating a new genre and spawning a legion of acolytes. It’s nice to finally meet the man behind our best nightmares. Recommended.

GREASE LIVE!
2016; $12.98-21.98; UR
“Grease” The Play is far better than “Grease” The John Travolta Movie, but they both fall behind this rollicking return to live TV starring Julianne Hough, Aaron Tveit, and Vanessa Hudgens. And while the entire cast is excellent — including Elle “Army Wives” McLemore, Keke Palmer, Didi Conn, Eve “The Brady Bunch” Plumb, and Mario Lopez — it is Hough who struts away with the show as the virginal Sandy, eventually painted into a pair of shiny, skin-tight pants that made us proud to be Men. Only profoundly sexy songbird Hudgens comes close to stealing her thunder. A pure joy.

MACBETH
2015; $14.98-26.98; R
There have been nearly 100 different cinematic versions of Shakespeare’s classic tale of Scots and women and power, but none more intimate. Michael Fassbender (Erik/Magneto from “X-Men: Days Of Future Past”) stars as the titular general, informed by a trio of witches that he is destined to be king. His impatient wife (Marion Cotillard, “Inception”) goads him into killing the current king to fulfill the prophecy, Some audiences complained that the Scottish accents were too softly spoken, but we found that made it all the more intimate. Turn off your damned cell phone and let the words of a master find your soul.

WOLF GIRL & BLACK PRINCE: COMPLETE COLLECTION
2014; $34.99-42.99; UR
From what we’ve seem of their video culture, the Japanese must have a brutal sense of humor. Consider this romantic-comedy anime in which Erika, a sweet, innocent — if shallow and painfully shy — girl, tells everyone that class-stud Sata is her boyfriend, in hopes of being accepted socially. He goes along with the ruse because he is a sadistic turd who treats her like his slave. Like we said: A rom-com. But it’s all redeemed by Erika’s healing effect on the boy, as he comes to care for someone other than himself for the first time in his life. She also grows, learning to deal with the social pressures and loneliness of high school. Surprising and touching.

YOU’RE KILLING ME
2015; $24.98; UR
A riotous, dark, pointed look at modern culture, mixing humor, death, homosexuality, and the unbelievable self-absorbed banality of the young. Joe (Matthew McKelligon) finally comes to grips with his inner burgeoning serial-killer, confessing a raft of black desires to boyfriend George (Jeffery Self). But George has far more pressing things on his mind — like dreaming up a new meme to make his mark on social media! He doesn’t seem to notice that their friends don’t seem to come around as often. Maybe because they’re, like, dead? Watch for Mindy “Facts Of Life” Cohn, Rachel Shukert from TV’s “Supergirl,” and Jack “Meet The Fockers” Plotnick.

40 LOVE
2014; $24.98; UR
A subtitled French-language tale about a father and son both reaching for something precious. The boy is a promising tennis player, focused on earning a place at a prestigious and very expensive training center. That’s when the father, an executive for a large corporation, loses his job and decides to start his own business, despite his wife’s strenuous objections. As they chase their ultimately entwined – and probably incompatible – dreams, the tension builds like an old-school Hollywood thriller, culminating in a tennis match that will determine all their fates. Damned entertaining and original.

BIBLE STORIES: MOSES
1995; $14.98; UR
And it did come to pass in the crux of the new millennia that director Roger Young did fatten his resume with such TV tales as this. And, yea, it did star Ben Kingsley – who soundeth like Mork From Ork in spots – Frank Langella, and Christopher “Draclua” Lee as the Pharoah Ramses. And it was good; as good as the manna upon which feasted the filmcrew in those hot desert lands. Now delivered unto you fully restored and remastered, overclad in fancy gold rainment which will be quickly spent and thus discarded. And if so parched, thee may slake thy thirst with this, plus the parables of “Abraham” ($14.98) and “In The Beginning” ($29.98) with sanctity and approval of the Foundation of the Dove. Amen.

COMING HOME
2014; $24.98-34.98; PG-13
This multi-award-winning subtitled Chinese romantic drama may have a tortured plot, but it plays out so slowly and beautifully you won’t notice how labored the premise is. A loving and devoted couple, just starting their life together, are devastated when the man is savaged by police and thrown into a labor camp as a dissident. Simultaneously, the woman loses her memory in an accident. When the man is released, he returns to her, only to find that she no longer recognizes him – though she remains faithful, awaiting his return! A story of commitment, compassion, and humanity at its very worst and very best.

EXCESS FLESH
2015; $17.98; UR
We don’t know what to make of this minor distaff drama-thriller, but we have to admit that it’s both thought-provoking and entertaining in a disturbing way. Jennifer (Mary Loveless) is a stunning, bed-hopping party animal, perfectly at home in the extremes of the LA fashion scene. Her new roomie, Jill (Bethany Orr) desperately wants to be just like her, but just doesn’t have the knack. So, instead, she decides to chain Jenny to a wall and torment her to death. You know, like ya’ do. A feminist torture-porn wannabe with an actual point to make. Who knew?

IN THE HEART OF THE SEA
2015; $22.98-44.98; PG
A big, wet “one that got away” fishy tale, supposedly the real-life genesis of “Moby Dick”, starring Chris Hemsworth, Cillian Murphy, and Brendan Gleeson. It’s probably pretty good, but we don’t know since the damned studio wouldn’t send is a review copy. Hey, if they don’t care about LEO readers then why should we care about them? Directed by Ron Howard.

RATTER
2016; $14.99
This low-budget just-barely-R rated psycho-thriller isn’t particularly scary, but it has something that too few movies have: drop-dead gorgeous “Pretty Little Liars”s star Ashley Benson! She’s just moved to NYC; done got herself a wee, crappy little apartment and all the fun that comes with it, including a cyber-stalker who seems to be everywhere. The rest is straight out of today’s headlines. BTW: Ashley is nearly the only woman in the whole movie, which isn’t exactly a bad thing.

ROOKIE BLUE: THE FINAL SEASON
2015; $23.98; UR
This ABC Canadian-made modern police drama was much more popular north of the border than south, but that’s because like all good dramas it started out slow, letting you get to know the characters, making their stories more real and affecting. American audiences’ attention spans had trouble grasping the concept. Missy Peregrym, who is hot-hot-HOT, leads her four academy-chums out into the real world, discovering that nothing in school has prepared them for what awaits. By this 6th season the relationships between the five, their fellow officers, and their community have meshed into as complex and satisfying a web of humanity as we’ve ever seen. American TV should be this good.

THE BENEFACTOR
2016; $14.98-32.98; UR
We’ll watch anything with Dakota Fanning in it, and this offering includes too-rarely seen Richard Gere, along with Cheryl Hines from “Curb Your Enthusiasm”, and Clarke Peters and Brian Anthony Wilson from”The Wire.” Kota literally glows as the blissful new bride of Theo “Divergent” James, crossing paths with a rich nut-job (Gere) who immediately becomes infatuated (stand in line, dude), and sets about manipulating their lives to relive favorite moments from his own! A good first drama from emerging writer/director Andrew Renzi.

THE NIGHT BEFORE
1015; $24.98; R
Joseph Gordon-Levitt, Seth Rogen, and Anthony “The Falcon” Mackie … do we really need to go on? Okay: This is basically a lowbrow Bachelor Party/Hangover movie but with a Christmas theme and LOTS of cameos. We spotted Lizzy Caplan, Michael Shannon, Mindy Kaling, Tracy Morgan, James Franco, and Miley Cyrus – and we weren’t really trying. Nudity, gross-outs, and gratuitous product-placement galore, as you night expect. Yes it is awesome.