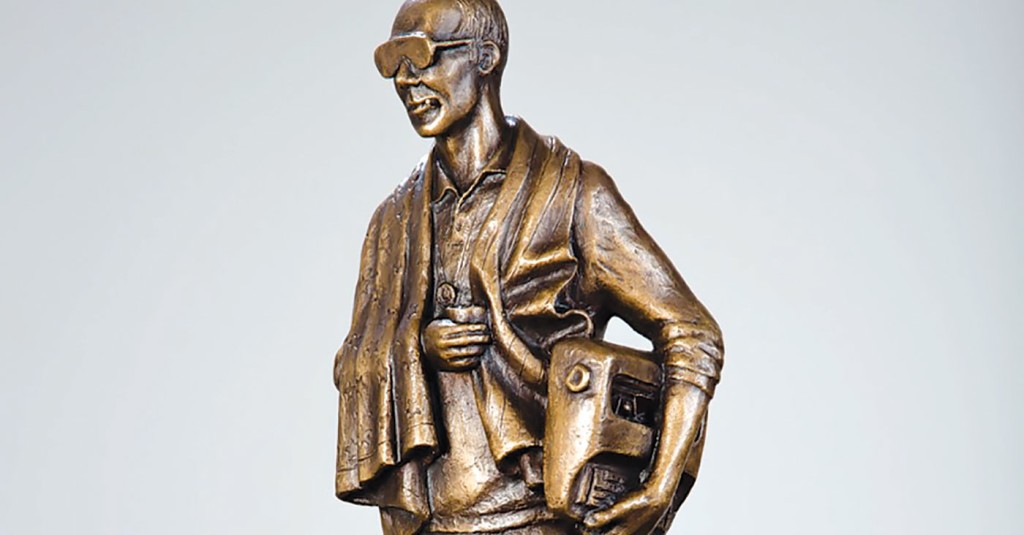 Before Hunter S. Thompson took the world by storm with his colorful character and unique brand of Gonzo journalism, he was just some kid growing up in Louisville, a kid who spent his summers with his mother at the downtown library where she worked her entire life.

One can imagine a young Thompson spending his days at the library devouring books and developing the vocabulary he would need to become one of America’s most celebrated authors, or one could just as easily imagine him sneaking out of the building to go cause havoc and mayhem across the city.

Either way, long gone are the days of Hunter S. Thompson wandering around the downtown library … or so we thought.

Thanks to the beautiful bastards over at Gonzofest, local artist Matt Weir has been commissioned to sculpt a bronze statue of Thompson, and one spot being considered for the placement of that statue is the downtown library.

The statue captures Thompson after a failed bid to be elected sheriff of Aspen, Colorado. Weir said he didn’t want to create a caricature of Thompson, and that moment after he lost, and what he had to say about it, was quintessential Thompson.

“At his concession speech he was wearing a wig on his head, because he had shaved his head in order to call his opponent his long hair opponent,” said Weir. “He had an American flag over his shoulder, a drink in his hand, and he said, ‘The American Dream really is fucked.’”

Thompson would go on to become not only a fierce critic of Tricky Dick but of the entire political system and the American Dream itself, which made him both beloved and despised.

“What I really wanted to do was make a hero/anti-hero monument,” said Weir. “Because depending on your viewpoint or what you think about his writings, he is so classically both. So I really wanted to capture the whole piece through that perspective.”

“I designed the piece so that it would be an inviting piece,” said Weir. “I want people to come rest, sit at the statue, read a book, listen to a book, write a book — just engage with writing, literature and journalism at the feet of this Louisville icon.”

As for the placement, the people at Gonzofest haven’t made any official decision yet. They are still focused on fundraising for the statue’s creation (donate now at indiegogo.com/projects/gonzofest-2015-hunter-s-thompson-statue#/). But Weir feels the downtown library would be too perfect to pass up.

“In the art world you hear people talk about ‘plop art,’ where a statue or a piece of art is just plopped somewhere for no reason other than it fit there,” said Weir. “And I don’t want that for Hunter. The place needs to fit his character. It needs to be somewhere that stands for something. And I think placing it at the library, where he spent his childhood with his mom learning to read before going on to become this literary giant. I mean how inspiring is that?”

It certainly would be poetic, and we here at LEO like to think Thompson would appreciate that. •

“Let us toast to animal pleasures, to escapism, to rain on the roof and instant coffee, to unemployment insurance and library cards, to absinthe and good-hearted landlords, to music and warm bodies and contraceptives… and to the ‘good life,’ whatever it is and wherever it happens to be.”