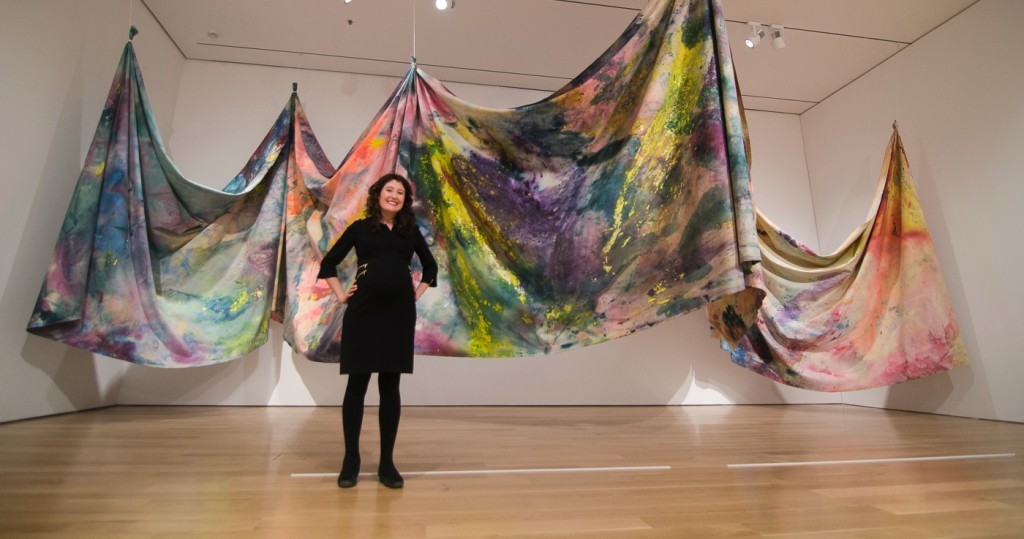 [all photos by Nik Vechery]

That’s one of the marketing slogans the Speed Art Museum is using as it reopens after a $60-million dollar renovation and expansion.

So we asked the Speed curators to talk to us about their favorite must-see art from the museum’s permanent collection, something they want the visitors to see. Their insights made the artwork come alive and, more importantly, become personal.

To read a list of my favorite pieces — LEO’s treasure map to the Speed — pick up the latest issue (3/16) on the stands. Yes, the Speed may own and house them, but they are mine. I suggest you visit and find your favorites, truly letting it become “your Speed Art Museum.”

“I love the exquisite writing desk by Gilles Joubert from around 1755. My thesis was in 18th and 19th century decorative arts in ducal palaces in Paris. And, later, I took that study and applied it to my work at Sotheby’s in London and New York. This is a fabulous piece for showing the epitome of elegance and technique with tortoise shell inlay, brass and gilded copper. The amazingly cast gilt mount all together represents the extreme sophistication of the Court of Louis XV and why French decorative art became a leading testament of design for all of Europe. This piece was crafted for the chateau of Louis XV at Choisy, outside of Paris. It’s a beautiful combination of craftsmanship and aesthetics, and it helps illustrate how people lived at the time. You can imagine someone sitting there, writing a letter, and certainly, as elaborate as the desk is, you can imagine what the rest of the living space looked like in the chateau. Plus, it’s simply a stunning piece of furniture.”

Chief Curator and Curator of Decorative Arts and Design

“For sheer aesthetic pleasure and historical significance, I always come back to Kentucky sugar chests and sugar desks. I hope our visitors take a moment to look at the six examples shown among the 180 objects in the Speed’s new Kentucky Gallery. So why do sugar chests and desks fascinate? For me, the idea of having an expensive piece of furniture specifically made to store sugar seems so odd from today’s perspective. Nowadays, sugar is so common and we consume so much that it is consuming us. In Kentucky, in the late 1700s and early 1800s, circumstances were quite different. Refined white sugar was a costly commodity warranting its own piece of furniture. The high cost was due, in part, to distance — refined sugar was produced on sugar cane plantations in Louisiana, the Caribbean and elsewhere. Often, the storage compartments in sugar chests and desks were divided into two or more sections, presumably for storing the white sugar cones and also less-expensive, locally-made brown sugar. Storing sugar in a handsome sugar chest or desk drew the attention of one’s guests as they enjoyed the sugar-sweetened tea, coffee and alcoholic drinks that lubricated social occasions. As objects made for display, sugar chests and desks were frequently lavished with inlaid decoration, adding to their aesthetic impact. Visitors will see flowers, vines, trees and other inlaid patterns adorning the chests and desks on view, all done in lighter colored woods set into expanses of darker walnut and cherry.”

Mary and Barry Bingham, Sr., Curator of European and American Painting and Sculpture

“I picked James Tissot’s ‘Waiting for the Ferry’ [1874]. I think it has so many compelling layers of meaning. On one hand, it has a random, snapshot quality that captures a moment in time — you can almost hear the man rustling his newspaper and see the little girl swinging her leg out of boredom. Mom is caught in a daydream. It’s incredibly contemporary and an unusual compositional choice in that these people are dressed in their Sunday best, but they’re hanging out at the loud, busy, dirty ferry queue. I think it’s also very sly on Tissot’s part. He’s depicting a fairly well-to-do family of socio-economic means, the very audience who would have been inclined to purchase or collect his paintings. It’s a bit of pointed social commentary about the relentless pace of modern life. And, it’s even better when you see it in person.”

“I chose Sam Gilliam, ‘Carousel Form II’ [1969], as one of my favorite artworks on view because it is a stunning, large-scale painting. The piece is 75 feet long, and the artist, Gilliam, designed it to be draped and suspended from the ceiling. I love how the vibrant colors and folds of the piece change every time it is installed. This is the first time ‘Carousel Form’ is being exhibited as part of the Speed’s collection, making it part of a special moment during which we embark upon celebrating the strengths of this marvelous collection in the new North Building.”

Curator of Prints, Drawings, and Photography

“My favorite piece in the collection, and one I hope everyone who visits the new Speed will seek out, is Albrecht Dürer’s masterful engraving of Saint Eustace [1501]. It is a pure, visual delight. Although I’ve studied and examined the print many times, every time I look at it I find something — some exquisite little detail — that I’ve never noticed before. It is a work of art that always seems fresh and new. I love the way Dürer uses simple lines for painterly effect, whether he’s depicting the folds around the ankles of the saint’s soft boots or distinguishing the texture of the bark on the trees. Technically, Dürer raised engraving to new heights, surpassing anything that had been accomplished previously. Plus, he combined the Italian Renaissance’s understanding of proportion and perspective with a northern European taste for elegance and detail. Dürer ranks among my top five printmakers of all time, and this is one of the artist’s largest and most ambitious engravings. It is truly a virtuoso, not-to-be-missed piece.”

“As the new department and art form to be featured at the Speed, I wanted my selection of the first film selected to reflect the interdisciplinary nature of the museum’s program, the history of cinema and something for children, as there will now be a generation of people in Louisville who will grow up seeing films at the Speed. The German film from 1970, ‘TRIADIC BALLET (DAS TIADISCHE BALLET)’ fits perfectly. It’s a brilliantly-colored filmed version of the avant-garde ballet from the early 1920s by Oskar Schlemmer of the Bauhaus, who also designed the wild geometric costumes, which completely upend how one views the body in motion. It brings together the worlds of music, design and dance into a mesmerizing cinematic short work. It screens at 10 a.m. on Saturday, March 12 in the Speed Cinema.”