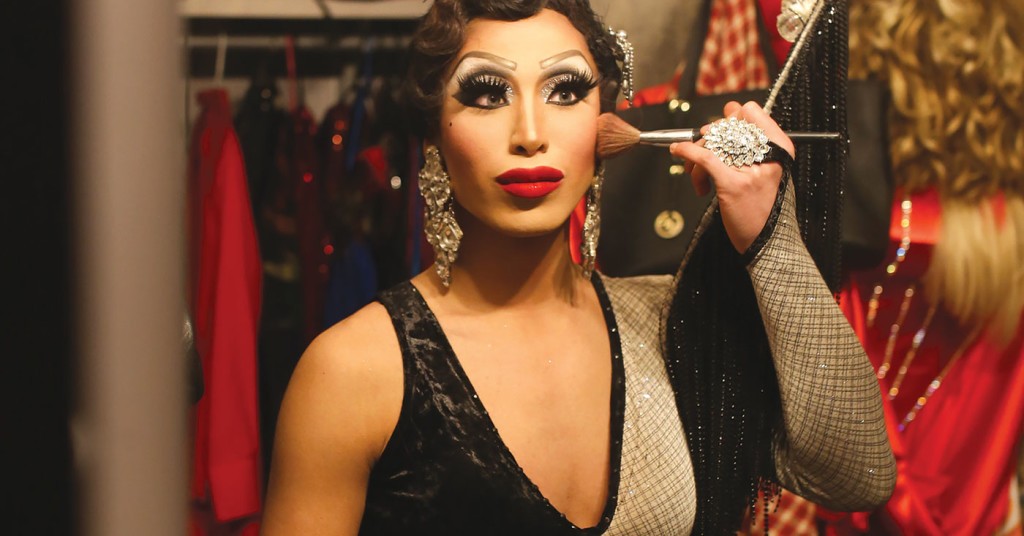 If you’re a fan of a great party, you know it’s hard to beat a kickass wedding for a serious get down. Of course, another contender for best party would be a really great drag show.

Get the best of both worlds and support a rad cause this weekend when FEVA, the Fair Event Vendors Alliance, throws their annual fundraiser. “Moulin Louge: a Cabaret Extravaganza” is an evening of performance, hosted by Play.

The night is based around the films of Baz Luhrmann, director of “Strictly Ballroom,” “William Shakespeare’s Romeo and Juliet” and “Moulin Rouge.” The director is known for creating lush spectacles, but look past this event’s glitter and glam to find a heart full of love.

Heather Yenawine, known as HAY DJ when she’s spinning, has been a member of the wedding industry for long enough to see the treatment that LGBTQ couples sometimes get. “We noticed at wedding shows that LGBT couples were reticent to approach vendors. When they did approach vendors, a lot of times they’d be misunderstood. People wouldn’t pick up on the fact that they were a couple.”

Of course a simple misunderstanding is far from the worst thing a couple might encounter. “With vendors there would inevitably be a moment when they’d have to say, ‘Oh, by the way, we’re a lesbian couple, or we’re a gay couple,’ and possibly face a discriminatory response.”

Suddenly, a couple that should be planning the happiest day of their lives would be facing the disheartening facts of living in a society sadly still struggling to accept their love.

Yenawine began asking around the industry to find other vendors who were ready to say “I do” to fairness, and become the founding members of FEVA. Though the website launched with 30 vendors, it’s grown to almost a hundred since its inception in 2014.

When that website launched it was initially a simple listing of fair minded vendors, but FEVA’s mission has expanded. “We also educate vendors,” said Yenawine. “We do workshops and provide a packet of information that includes things like a glossary of terms, and we talk about those terms and what they mean — like, for instance, transgender, or queer, terms that sometimes have a political history and are difficult to understand.”

Yenawine says that the wedding industry is very traditional, and that the education they offer aims to deal with the changing times. “Relationships are changing, and marriage is changing and we need to adapt to that.” FEVA teaches its vendors to ask questions. “The questions open up to all types of couples whether they’re straight or LGBTQ.”

They’ll all be performing songs from Luhrmann’s film, which are all known for soundtracks as incredible as their eye popping visuals.

In past years, FEVA has thrown WesFest, a party and costume contest based on the oeuvre of Wes Anderson, but Yenawine felt Luhrmann lovers might be a more diverse crowd. “You got people who are interested in movies and musical theater and costumes. It’s such a lavish and love-centric world that he’s created.”

Vaudeville Louisville is a new company in the Louisville burlesque scene. “I’m  a big fan of ‘Moulin Rouge,’” said Holly Harvest, Vaudeville Louisville’s founder. Yenawine reached out to Harvest and asked her to produce “Sparkling Diamonds” and “Because We Can,” Lurhmann’s versions of “Diamonds are a Girl’s Best Friend,” and the can-can.

Vaudeville Louisville is also presenting a piece set to music from “Romeo and Juliet.” “It’s gonna be a trio chair dance, the costume party scene in the movie,” said Harvest. “I’m really excited about that. We’re going to be doing like, handstands on the chairs. It’s very acro-based, and the costumes are amazing.”

Clay Marshall of Xplosive Rhythms will be performing, and he’s also one of the most recent members of FEVA. He learned of the group when someone tagged him in a post about the event on Facebook. “Somebody tagged me in a post because I’m kind of like the tango guy in town,” said Marshall.

He agreed to provide the evening with two numbers, “Roxanne” from “Moulin Rouge” and “Time After Time” from “Strictly Ballroom.” At that point FEVA didn’t have a dance studio in their listings, and many a married couple knows how special their first dance was. “I was really surprised to find out that they hadn’t (had) a dance studio connect with them,” said Marshall. He and Xplosive Rhythms promptly joined FEVA. “My partner and I care about same sex couples that want to have a first dance.” Marshall is looking to begin an LGBTQ-friendly ballroom class, “So any people who love dancing and would love to be able to do that with their partner will have a safe space to do it.”

Xplosive Rhythms’ “Roxanne” should be particularly interesting. They’re performing with two same sex couples. One might think that would provide a unique challenge for a dancer performing across their traditional gender lines, but Marshall says “no.” “As a teacher I have to be able to dance both parts of the choreography anyway. I just had to add a little extra style and flair to amp it up for the performance.”

While the onstage antics should be more than enough to keep you entertained, there is also a costume contest, with a panel of celebrity judges, including Wil Heuser, DJ Syimone, Dr. Kaila Story, Jaison Gardner and Sara Havens.