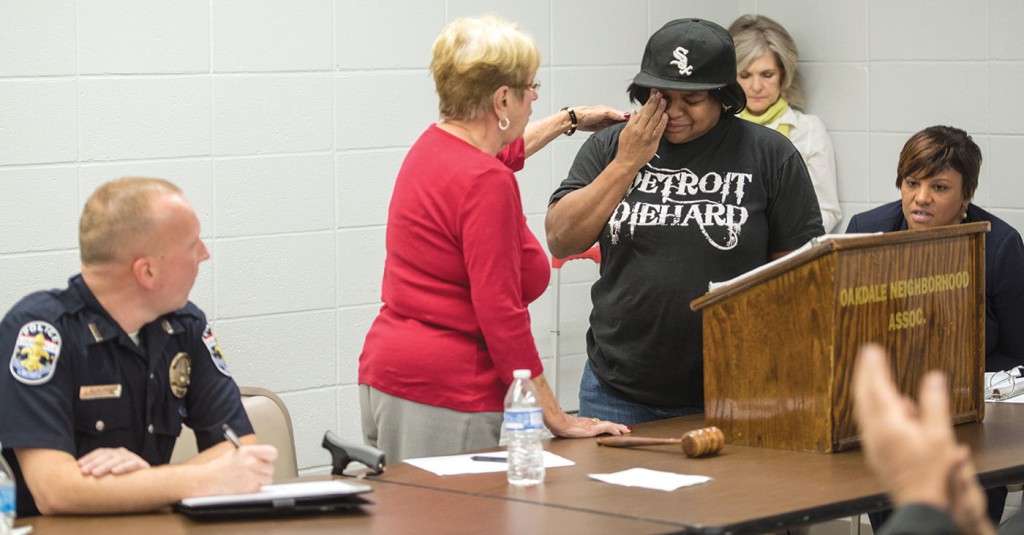 Ranada Woods is comforted by Barbara Devereaux after telling how she suspected that local kids looted her home after a fire at the Oct. 26, 2015 Oakdale neighborhood meeting at the Salvation Army on Beecher Street in Louisville, KyPhoto by Brian Bohannon

People across Louisville suddenly knew where Oakdale was located, after a double homicide on Evelyn Avenue last October. J. Juan Kimbley and Demond Ramsey were shot to death in what police believe was a gang-related incident. No arrests have been made. The murders were followed days after by several drive-by shootings that luckily resulted in only property damage.

When the Coleman-Bush Company began selling lots in Oakdale in the late 1890s, the neighborhood situated between Churchill Downs and Iroquois Park was an outpost in South Central Louisville. Thanks to the extension of the streetcar line and construction of Grand Boulevard (now Southern Parkway) the neighborhood, named for its large number of oak trees, proved attractive to middle class families looking to get away from the city center. Oakdale also experienced a housing boom in the 1940s when the nearby Naval Ordinance Station opened and workers were looking for local housing.

But at an emergency meeting called by the Oakdale Neighborhood Association two days after the Oct. 24 shootings, longtime residents complained about open-air drug sales, robberies, and groups of unsupervised teenagers stealing change from unlocked cars, shoplifting from the local Walgreens, and harassing pedestrians at Wyandotte Park.

It was a snapshot of a neighborhood in distress.

Ranada Woods recounted tearfully how she lost her home to fire, and it was later looted by teenagers.

The Louisville Metro Police Department has increased patrols in the area, and city officials are working to boost economic development there. But some residents worry it might be too late for their community, while others have already moved.

“And I’m not far behind,” said Tom Ashby, a retired landscaper who lives on Whitney Avenue. “The police have done a better job about patrolling the area, but the drugs and crime are still here. Most people think it’s just a matter of time before something else happens.”

Ashby, 67, and his wife, Sonya, moved to Oakdale five years ago. In that short time, they have watched the neighborhood disintegrate. In the last year, Ashby said, a weed trimmer and various tools were stolen from his porch, and he had to call the police several times because of what he suspected was drug activity near his home. In August 2014, he was assaulted while collecting scrap wood for kindling in the alley behind the Denmark Market at 901 Denmark St. A group of teenagers tried to block his path, so he nudged his truck forward slowly to encourage them to move. But the situation turned drastic after one of them accused Ashby of trying to hit his girlfriend.

“Then some punk came and clobbered me in the side of the face. Another grabbed the sledgehammer out of the back of my truck and hit me in the arm. I threw the truck in reverse and scattered them.”

Ashby retreated a few blocks away and borrowed a phone to call the police. Another teen with a backpack came by and told Ashby he had been harassed by the same group. He gave the retired landscaper the name of one of his attackers. Ashby said he passed it on to a police officer at the scene, but he has not heard back.

Barbara Devereaux, president of the Oakdale Neighborhood Association, said it was a quiet blue-collar community when her mother purchased a home on Camden Avenue in 1956. When her mother got sick 18 years ago, Devereaux took over the home, and she’s had a firsthand view of the negative changes in the community. “My husband was in the military and I was happy to have a home,” she remembered. “I put money into it, and I’m still proud of it. I have invested a lot into this community and I’m not ready to give up on it now.”

But she has watched the area devolve.

Since Jan. 1, there have been 384 crimes reported in the  neighborhood, according to the LMPD’s online crime map. The majority were drug related, but they also included assault, burglary, and shootings. Officers have been asked to spend more time during their shifts riding through the area of Denmark and Wheeler, Fourth Division Resource Officer Lamont Washington said. All platoons did two-officer details for a few weeks after the October shootings. Washington said violent crime rate dwindled, in part perhaps because the winter weather. In the three weeks after the October murders, 75 arrests were made, 16 warrants were served, and 43 misdemeanor citations were written in the area.

Devereaux attributes the problems in Oakdale to the recent economic recession and proliferation of rental property in the community. She said landlords buy inexpensive homes, don’t keep up the property, and are not picky about renters. With a little help from city government, she believes, Oakdale could thrive again.

“Despite all the problems, this neighborhood still has a lot going for it,” Devereaux said. “The houses are cheap. This is a great area for a young couple looking for a starter home or even parents with a student at the University of Louisville. You can probably buy a house here for what you pay to live in the dorms. Oakdale also has a great location. You can get almost anywhere in the city with little traffic.”

A Call For City Help

Devereaux said she and community leaders are working on several fronts to rescue Oakdale. She has met several times with Metro Councilwoman Marianne Butler (D-15) and Yvette Gentry, the city’s new Chief of Community Building, to come up with solutions. Last year, Butler appropriated money to pay overtime to Fourth Division officers. Earlier this year, she gave $22,000 to the Center for Neighborhoods to create a neighborhood plan for Oakdale so it can qualify for federal funds to better fight crime, promote economic development, and make landscape improvements. The center started work in March and the plan is expected to be completed by July. At least two public meetings will be scheduled so that Oakdale residents can have a say in the future development of the neighborhood, Executive Director Tom Stephens said.

“Once the neighborhood plan is in place, we can start targeting some of the specific problems in Oakdale. People here want restaurants and shopping centers like they have everywhere else in town. Those things will bring jobs to the area and attract more homeowners,” Butler said.

Vince Jarboe is a member of the Southwest Dream Team, a non-profit economic development organization focused on South Louisville. The Dream Team spearheaded the passage of the New Cut-Taylor Boulevard Corridor Plan, which the Louisville Metro Council adopted last year. That plan covers the area just south of Oakdale, between I-264 and the Outer Loop. It calls for three economic development zones: Colonial Gardens, the Outer Loop and New Cut, and the site of the Iroquois Homes.

Jarboe believes just having more jobs nearby will help Oakdale and a number of landscape improvements. Projects have already started at Colonial Gardens on Kenwood Drive and at the Outer Loop and New Cut Road, where warehouses are being built. Colonial Gardens is going to be turned into a food court with four restaurants. The Outer Loop warehouses are being built for storage. Jarboe hopes to attract a big retailer like a Target or even a movie theater for the Iroquois site.

Jarboe said Oakdale needs economic investment, but entrepreneurs overlook the neighborhood because of its poverty and crime. Oakdale residents have a median income of $27,641, and 18 percent live in poverty, according to the last Center for Neighborhoods assessment, done in 2005. Nearly 25 percent of the children in Oakdale live below the federal poverty line.

Jarboe believes that development farther down Taylor Boulevard could help Oakdale. He said it is especially important that the city can get a large retail tenant for the Iroquois Homes Housing Project, a federal housing project torn down in 2012. This is the last remaining economic development zone in the New Cut/Taylor plan.

“If the economy continues to get better, I think things will improve at Oakdale. There are great people who live in this neighborhood. Hopefully, the current homeowners continue to take care of their property and don’t give up. It’s a long road to change a neighborhood,” Jarboe said.

The Rev. Corey Nelson, pastor of Grace United Methodist Church at 900 Denmark St., believes Oakdale is improving. Nelson said that when he began at the church about three years ago, he had to pick up used hypodermic needles from the sidewalk before service. Although heroin remains a problem, Nelson said, drug use is not as open.

Nelson feels that a lot of the problems in Oakdale are caused by adult drug use, the recent economic crisis, and the lack of resources in the community. He pointed to the closure of the South Louisville Boys and Girls Club at 1010 Beecher Street. It closed in 2011. “These kids have nowhere to go,” Nelson explained. “Last summer there was a roving band of older teens, they ranged from a group of six to about a dozen. Those kids were into trouble and were doing things they shouldn’t be doing. But the vast majority of kids around here are good kids. They just don’t have a lot.”

Nelson has opened up his church for movie nights, and he tries to plan other activities for area children. The church eventually plans to offer employment opportunities and job training programs, but they need help from the government. Nelson said Oakdale, and especially the youth, get attention for doing negative things but nobody seems to care when there is not a news camera around reporting on crime.

“We’re forgotten here in the South End,” he said. “The complaints people have are legitimate. People are scared and there is reason. The big thing people don’t understand is that this didn’t happen overnight. It wasn’t one week this was a great neighborhood and then it’s coming apart at the seams. It was a long progression and it’s going to take a long time to reverse the situation. If we are going to make a different here, it is going to be through the kids.”