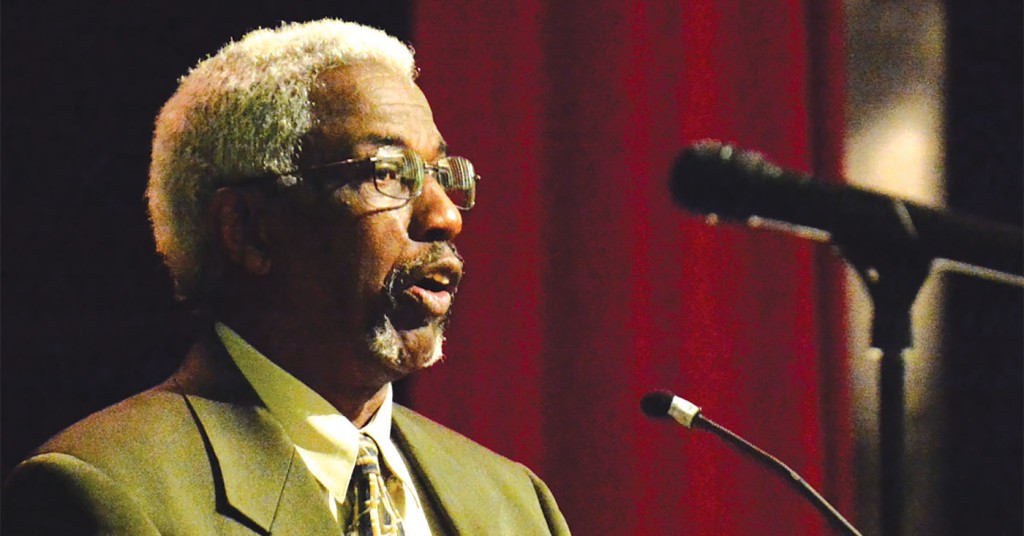 An increase in TARC services to the Riverport Industrial Park.

Consistent funding of the Louisville Affordable Housing Trust Fund in the 2016-17 city budget.

All city officials who were invited came and made commitments, except for a representative from Jefferson County Public Schools, despite repeated invitations.

Meeting organizers from Citizens of Louisville Organized and United Together, CLOUT,  said they were disappointed that schools Superintendent Donna Hargens and other officials declined to attend the meeting at the Louisville Memorial Auditorium.

“Donna Hargens and JCPS’ school board members wouldn’t agree to come tonight because they can’t control the message,” said Chris Kolb, vice-president of CLOUT, which is a county-wide network of congregations working to solve community problems. “Hargens is acting like locking children in rooms, or slamming their heads against walls and floors is simply a PR problem, and it’s getting worse because they refuse to address the real issue.”

School board member Linda Duncan told LEO in an interview that they declined to attend the meeting because of its “awkward” environment.

“They ask you to go on stage and make commitments to things you can’t commit to, and then if you say ‘no’ they boo you,” Duncan said, adding that the schools have been working on CLOUT’s concerns. “It’s very awkward. It’s almost like they’re throwing rotten food at you on stage.”

Kolb said the recent Courier-Journal article that found JCPS failed to properly report more than 4,400 incidences of students being held down or confined last year “confirms that the stories we’ve been hearing for years were not outliers, but a systematic problem.”

Physically restraining children as a disciplinary measure, can discourage them from going to school, causing them to fall behind or drop out, Kolb said. Alternatives such as “restorative practices” are necessary, he said.

Restorative practices overhaul how teachers discipline students. They include actions as simple as asking teachers to address students as equals and not as subordinates. Other practices call for creating a framework of disciplinary measures with out-of-school suspension as a last resort.

Duncan said a few Louisville schools are already using the restorative practices that CLOUT wants, but high training costs have prevented them from reaching all schools. It could cost about $50,000 a school, she said.

About 21,000 families are on the Louisville Metro Housing Authority waiting list for housing assistance, according to the housing authority. The Coalition for the Homeless’ latest street count was up by 57 percent this year, and JCPS reported that 6,779 of their students were homeless in 2015.

The Affordable Housing Trust Fund gives grants, loans and technical assistance for the construction of affordable housing when other lending options are not available.

“I work two jobs and have been self-sufficient for a long time. But I still have to rely on friends and family for temporary housing,” Hall said. “Funding the trust fund would provide me and my children safe and affordable housing, and most of all stability.”

CLOUT asked Metro Councilman Bill Hollander to commit to advocating for $5 million for the Affordable Housing Trust Fund in the 2016-17 city budget and to meet with CLOUT in the next 30 days to discuss how to secure consistent funding. Hollander committed to all of these requests.

Hollander said the Affordable Trust Fund is needed in addition to Louisville CARES or Creating Affordable Residences for Economic Success, an $11 million revolving loan fund, which provides  gap financing to developers of multi-family rental properties that are affordable to households making 80 percent or less of area median income.

“It’s not enough, but it’s a start, and it’s a good start,” Hollander said. “You’re going to hear from other council members that there are other priorities like paving the roads. Be prepared to say, if you believe it, that affordable housing is just as important to you as cracks in your street.”

Mayor Greg Fischer has said that Louisville CARES will create about 750 new affordable units and “positively affect” 750 additional households for a total of 1,500.

But Beverly Duncan, co-president of CLOUT, said that the 1,500 households affected by Louisville CARES will not be enough for the estimated 60,000 needy households in Louisville. She said that funding the Affordable Housing Trust Fund would be a better use of taxpayer dollars. She cited an analysis by the Urban Studies Institute at UofL (an analysis commissioned by Metro Council), which found that investing $10 million each year into the fund would add nearly 600 jobs and $42.5 million in economic activity over the proceeding five years.

TARC makes eight trips a day to the Riverport area, none at night or on weekends. But some companies there offer weekend- and third-shift positions.

Rev. Reginald Barnes of Brown Memorial CME Church, told the audience that 7,000 workers at the Riverport need frequent, safe and reliable public transportation to and from work. “Because of this lack of public transportation, people have to walk miles in the dark or bad weather to reach their job, and some have lost their jobs due to shift changes,” he said.

CLOUT asked Aida Copic, director of planning at TARC, to present a proposal for increased TARC service within the next 60 days. Copic agreed to do so.

Copic said expanding services in the Riverport area is a top priority for TARC, and TARC had been talking with the Riverport Business Association about how to solve the problem.

Payday loans are short-term loans, often used by low-income families, that offer people cash in advance for future paychecks with interest rates as high as 400 percent.

“The average person who takes out a payday loan will likely spend the rest of the year trying to pay it back,” said Jimmy Mills, co-president of CLOUT. “At 400 percent interest, these loans have caused people to lose their homes, their cars and their business.”

Della Weaver, a CLOUT member who took out a payday loan for bills, said she soon found herself using all of her money to pay off the interest. She said the loans forced her to file for bankruptcy.

“Even after I filed for bankruptcy, they continued to call and harass me for money. Some even took money directly out of my bank account,” Weaver said.

SB 101 now has four sponsors including Adams, and it awaits a hearing in the Senate Banking and Insurance Committee. Similar bills have failed to pass before. CLOUT encouraged people to call their representatives in support of SB 101. •