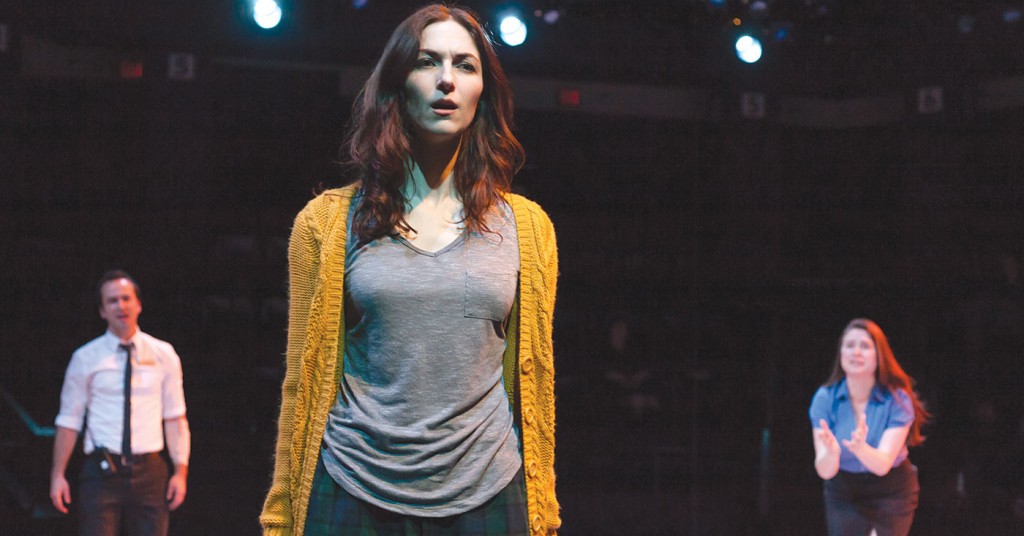 For 40 years the Actors Theatre of Louisville Humana Festival of New American Plays has been asking and answering the question: “What is new?”

From early on, it was clear that the answer wasn’t just chronological. The festival has always been a springboard for new voices, new topics and new approaches to storytelling. The festival has always birthed plays that have gone on to achieve national recognition and enduring significance on the American stage — and in recent years, festival plays have gone on (often with intact casts) to help shape the national theatrical agenda. By this weekend, three of the festival’s seven offerings will be in repertoire — and the pace will accelerate through the second weekend in April — when a person of great endurance could see the entire lineup in one deep immersion.

The first production of the festival, “Residence,” by Chicago-based Laura Jacqmin (whose writing credits include theater, TV and the video game “Minecraft: Story Mode”). On the surface, it’s a contemporary comedy of manners — but this is a comedy of manners with a chilling story lurking under the surface.

In the opening scene, we meet Maggie (Danielle Slavick) a Wisconsin saleswoman who has come to Arizona in January to spend a month peddling $30,000 portable ultrasound machines to area doctors. She’s lodging in a brand new extended-stay hotel, where most rooms offer either desks or balconies — and only a few offer both. Maggie definitely wants both. She wants them badly enough to sustain a hopeless debate with Bobby (Alejandro Rodriguez), the hotel’s all-around bellhop, concierge, driver, and more. Bobby uses his walkie-talkie to summon his boss, Theresa (Leah Karpel), a constantly smiling management trainee whose frequently invoked mantra is the “Five Star Experience” that she wants to give every customer (well, every customer except for the golfer who thought a Five Star Experience included groping the staff).

It’s a fun debate — witty, preposterous and memorable. And by the time it’s over, we know these characters pretty well. Maggie is an aggressive negotiator, persistent beyond reason, and ready to pounce on any loophole she sees — even when it’s clear that she has no hope of winning. Theresa wears her smile like a mask, but it’s a mask she embraces: This is a woman who not only studies management manuals (she’s studying for a degree in hospitality), she embraces them with a sincere fervor. And Bobby is a mellow guy whose self-confidence, amused detachment and sense of irony are perfectly suited to the job of catering to the caprices of demanding customers.

A series of vignettes take us deeper into these lives. When Maggie connects via FaceTime to her husband Ben (Avery Glymph), we learn that her husband is a stay-at-home dad taking care of their infant; that a recent hospital stay (that wasn’t pre-authorized) has left the couple facing a mountain of debt; that this sales trip is crucial; and that Maggie isn’t above lying. Before signing off she agrees to comply with Ben’s reminder that she shouldn’t drink — then she immediately pulls a bottle of whiskey from her luggage.

As for Theresa, she’s taking classes at a sketchy college (sketchy enough that it recently raised tuition — after the semester had already started). And Bobby, it turns out, is being dogged by a former girlfriend, Nita (Amelia Workman), who also just happens to be the mother of a child Bobby has never seen.

As a straightforward comedy of manners, the play explores droll cultural fault-lines. When Theresa criticizes Bobby for speaking English to a Spanish-speaking customer, she’s shocked to learn that he doesn’t speak Spanish — he was hired, after all, because of his Hispanic last name — and as Bobby and Maggie bond over a series of misadventures (including a tragi-comic episode involving a cereal box full of mice), they break down their class and cultural boundaries and find unlikely common ground.

As Maggie’s financial crisis deepens, her sales visits to a series of physicians, all played by Avery Glymph (who also plays Ben), go from bad to worse.

In fact, this genial, well-crafted comedy is gradually morphing into something else. These lives are curving toward disaster. Theresa’s estranged father, who is obliged to pay her tuition because of long-ago divorce settlement, reneges. Nita confronts Bobby with a dilemma that forces him to take a stand. Ben and Maggie find themselves on more than kind of precipice (one of the most urgent and extraordinary scenes plays out via FaceTime).

And then, in a deeply compassionate reveal, we enter into Maggie’s central tragedy. And if what follows seems a bit too pat and happy, maybe by that time we’ve still taken a memorable journey.