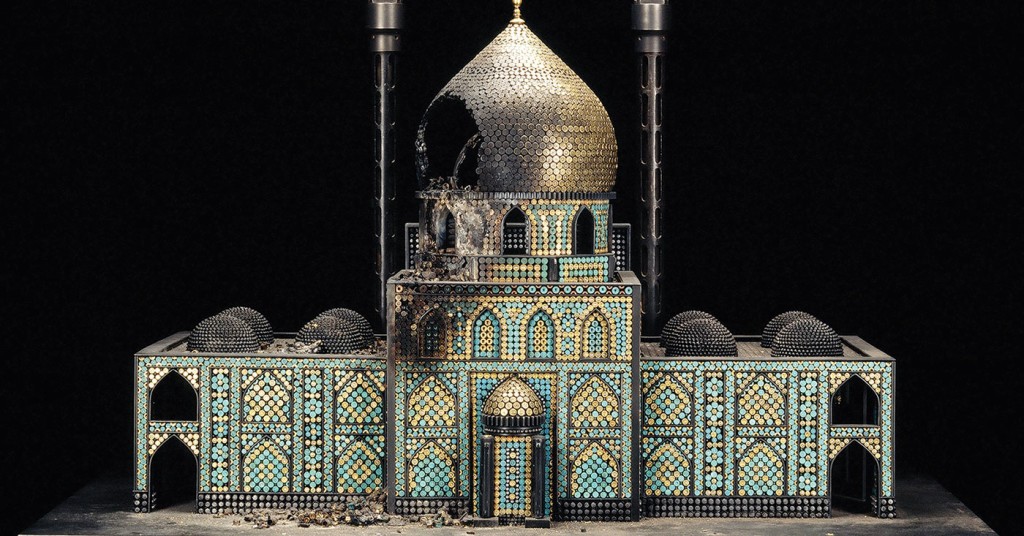 'Study for Mosque Reliquary' by All Farrow

Bullets and their projectile delivery system, the gun, are rarely used as art media. As a subject, yes, like the slaughter in Francisco Goya’s “The Third of May 1808” or “Weapons of Color” by former Louisvillian Brent Estabrook. It’s a rare artist who would want to create work with objects that have such a (loaded) history.

That artist’s name is Al Farrow. “Something really clicked when I started using real guns and bullets,” exclaims the creative social activist.

Viewed from a slight distance, his work in the 21c exhibition, “Al Farrow: Wrath and Reverence,” is awe-inspiringly beautiful. The structures draw you in as scaled architectural models of synagogues, mosques and churches. It takes your brain a minute to catch up to the fact that the details you have been admiring are bullets, shell casings and gun parts.

And when it does, the show’s title, “Wrath and Reverence,” becomes clear. Christianity, Islam and Judaism bring spiritual light to people. Unfortunately, the darkness of violence surrounds the religions, fostered by politics, history and culture.

Farrow collects most of the new and used firearms and ammunition from gun trade shows and mail order supply companies. He was trained as a draftsman with a specialty in Medieval architecture (two of his architectural drawings are on the walls of 21c).

His knowledge of buildings from the Middle Ages is apparent in “Revelation II,” a Gothic cathedral detailed with gun parts, lead shot and bullets. Encased inside its tall nave is a Bible showing a facsimile of the “Four Horsemen of the Apocalypse,” a print by the German artist Albrecht Durer based on a Book of Revelations passage.

“Bombed Mosque” shows a highly detailed Islamic mosque with references to the Shia and Sunnis Muslims. The crescent moon of the Sunnis tops the Shia architectural style. The moon? A black gun trigger.

Farrow is fascinated with reliquaries. In the show, these containers that house relics for worship include “Study for a Mosque Reliquary” and those dedicated to his fabricated saint, Santo Guerro (Saint of War).

While the exhibition pieces are religious structures created with deadly materials, one in particular drives Farrow’s point home. “Burnt Church” is composed of three rifles from the Verdun battlefield, a World War I siege near Verdun, France. One of the longest battles in history, it was fought between the Germans and the French from February to December in 1916. The church is incomplete, with only an online of the structure remaining. The three rifles stand tall, forming what is left of the steeple. The destruction — and its message — is gut wrenchingly clear.