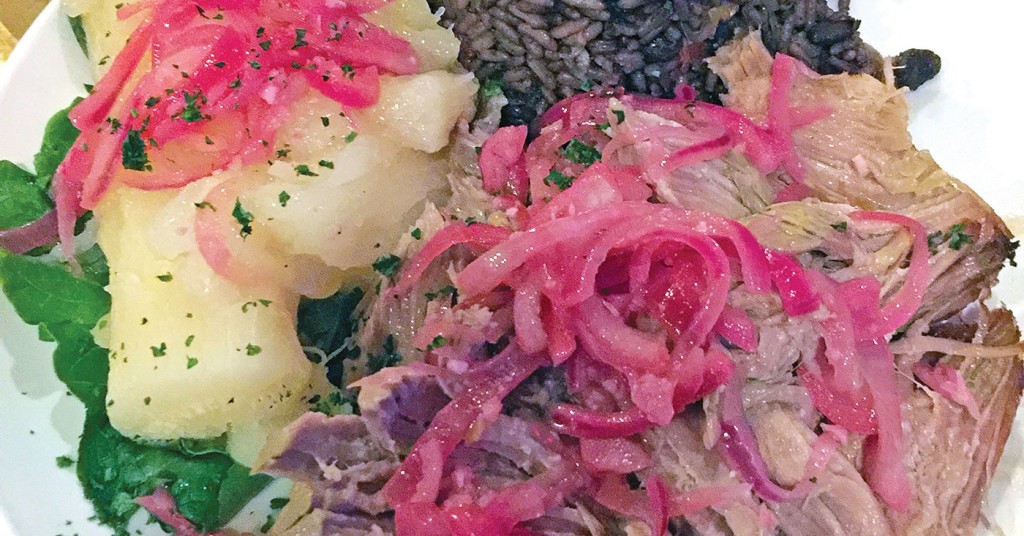 “Nobody goes there anymore. It’s too crowded.” Did Yogi Berra really say that? Baseball historians attribute this quote to the late, great New York Yankees catcher; but bear in mind that Yogi is also recorded as having said, “I really didn’t say everything I said.”

It was déjà vu all over again when we dropped in on Havana Rumba’s original St. Matthews location the other night. I couldn’t help but think of Yogi as our group crammed into a table set in quarters crammed with many happy, noisy people, all enjoying excellent Cuban food.

Everybody still goes to Havana Rumba, it seems, but to be honest, I was getting a little claustrophobic in those tight quarters, jammed in bicep-to-bicep with my dining partners on either side (fortunately, they were friends), and backed up tight against another stranger at an adjoining table.

It was loud. It was dark, dark enough that it was hard for these old eyes to make out the menu or identify with certainty what was on my plate.

This place is popular, and as the grandpappy of all of Louisville’s current Cuban eateries, deservedly so.

As a fan of some of the iconic Cuban eateries in Miami and Key West, I can be a tough judge, but Havana Rumba has always passed muster with me for Cuban authenticity. Comparing the menu against my October 2004 review, when it was the next big Cuban thing, it appears that they’ve stayed on course, still featuring Cuban favorites with prices adjusted only reasonably for inflation. Lunch options are generally in the $8 to $12 range, with dinner entrees topping out at just under $20 for Pinchos de Solomillo, filet mignon on a stick. Lots of Cuban favorites come in for less, including Ropa Vieja ($14.99, literally “Old Clothes,” don’t ask), a spicy mix of shredded beef, peppers, onions and olives; and Vaca Frita (“fried cow”), crisp grilled shredded beef with peppers, onions, garlic and lime juice. The always enjoyable Cuban sandwich is $8.99.

One of our favorite Cuban dishes is Lechon Asada, slow-roasted, citrus-marinated pork ($14.99 for dinner, $9.99 for lunch), and Havana Rumba’s model hits the mark. A huge portion of pork presented a tasty mix of tender white meat falling into strings with crunchy, roasted crust end bits. It came with standard sides of yucca (you say cassava, I say bland) and black-bean-and-rice congris.

Pescado alla Parilla ($15.50, “grilled fish”), was filleted with gray skin on one side and lightly grilled with attractive criss-cross grill marks. A Southeast Asian species said to be related to the catfish family, it was mild and delicate in flavor, scented with lemon and garlic and subtle grill smoke; and, happily, more akin to flounder than catfish in flavor. It came with a small bowl of delicious black beans and a side of white, steaming rice.

We thought Cubano Vegetariano ($12.75) was a meatless Cuban sandwich, but our menu-reading skills lapsed. It’s actually a plate featuring a selection of veggie sides: Black beans, rice, yuca, a mini-empanada and fried plantains. Healthy, I’m sure, but frankly boring.

Dinner for two, with a coconut-scented Cuban Punch cocktail ($7) and a simple, traditional dessert of Tia’s Flan ($5.25), came to a very reasonable $41.87, and server Ernesto’s pitch-perfect service, despite the crowd and noise, earned him a $10 tip. •

Sunday is the first day of Spring (Yay!), and the advent of warmer weather makes me think of Captain’s Quarters. And here’s news: CQ, the riverside destination that just about everybody loves, has new management, and sports a new menu for the new season.

Executive Chef Ken Barkley’s Spring Menu should be in place by the time you read this. Look for good, solid, fresh, quality ingredients — focused on seafood and fish, of course — in a bill of fare that GM Brad Young says is aimed at positioning CQ as not just a see-and-be-seen scene but a dining destination as well.

Six seafood options, from $15 for catfish to $22 for grouper, will be available in five preparation choices including Low Country, New Orleans, Caribbean, Pacific Rim and California style, for a variety of mix-and-match options. There are also steaks, a Hot Brown, chicken-and-waffles, tacos, pizzas and more. •